As part of the learning support team at Hong Kong’s ISF Academy, he is empowered to make his own decisions rather than follow orders 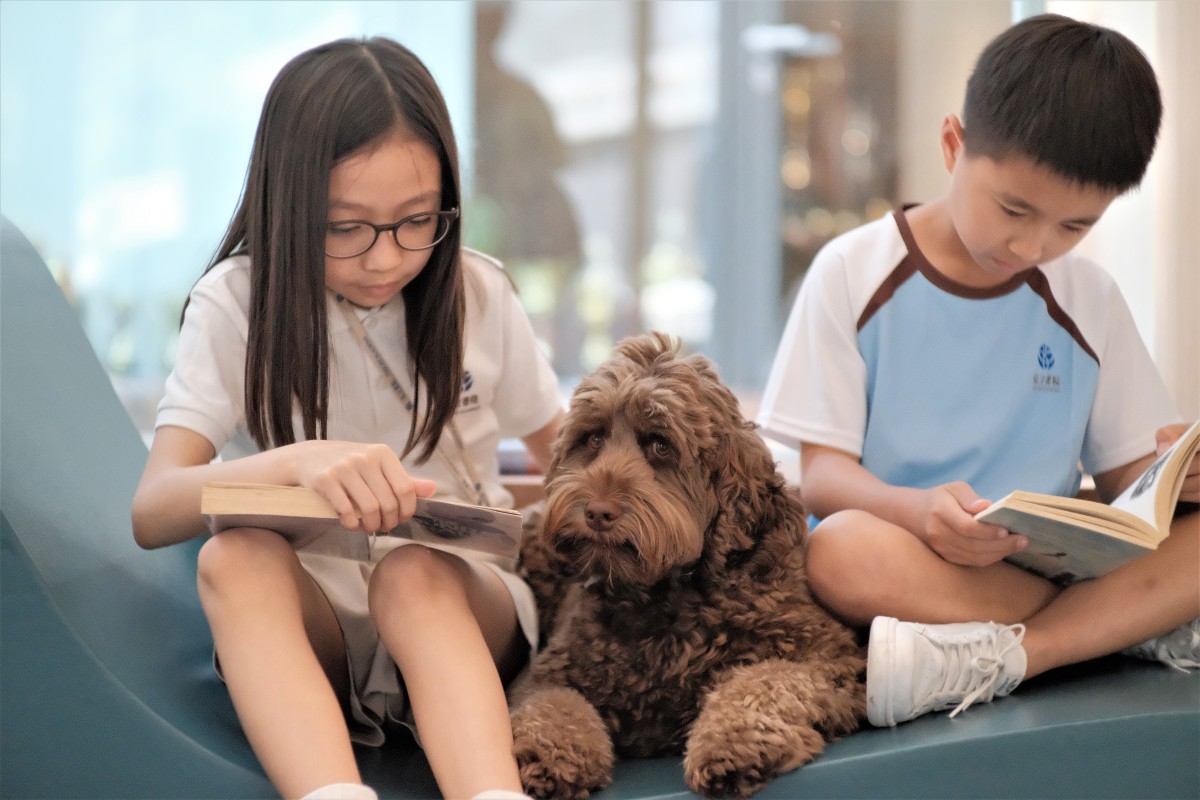 Imagine running late to school, feeling very stressed and embarrassed. Suddenly, you see a cheerful dog wagging its tail at you, just past the school gate. You walk towards the dog and give it a few pats on the head, and realise everything is going to be OK.

At Independent Schools Foundation Academy, instances like these happen 100 times a day, says Dr Rick Smith. Smith is the school’s learning and well-being specialist. His partner is Tucker, a chocolate brown Australian labradoodle, who works at the school as a therapy dog.

“Sometimes, [primary school] kids arrive at the front gate in tears because they don’t want to leave their parents. And then they turn around and see a labradoodle. They then go from crying to, “Oh hey, Tucker!” as they enter the school,” says Smith.

Two-year-old Tucker is a master at helping people relax, and he’s particularly good at calming anxious children, or those that can’t sit still. His go-to move is to flop down on a student’s lap, like a big, warm, soft cushion. This gives the kids something soft to stroke and also makes it harder for them to stand up and run around.

“It’s fun to see how people interact with Tucker and how everybody smiles when they see him,” says Stella Erro, a 12-year-old ISF Academy student. “It’s nice to see my classmates smile, even after a long day at school.”

Students are usually shy about going to the school’s learning support room, a place where they can ask for help with their school work or talk about personal problems, but Tucker gives them an excuse to visit.

“It is not something to be ashamed of, but some students feel embarrassed about going to learning support. But with Tucker there, they can just say they’re going to hang out with him,” explains Stella.

Ryan Ho Long-hei, also 12, says he has always longed for a pet.

“Tucker makes me very happy. Sometimes before assessments and tests, I feel really tense. But when I see Tucker and interact with him, I feel a lot more relaxed,” says Ryan.

“He gives a lot of us moral support.”

Smith says he’s also witnessed first-hand how Tucker helps students overcome their fears. He remembers several students who were terrified of Tucker at first and ran to hide in a corner.

“Now, they will come up and sit by Tucker, and stroke him. That’s been a common experience for a lot of the kids,” he says.

Unlike a lot of dogs that are active and run around a lot, Tucker is quite the opposite. He is always very calm. This makes students, even those who were afraid of dogs at first, feel safe around him.

“I feel calm seeing a dog being so calm. It’s just different to see such a quiet and still dog,” adds Ryan.

Another difference between Tucker and other pet dogs is that he doesn’t respond to any commands. Instead, he makes his own decisions.

How social media can be a force for good

“He’s quite similar to a seeing-eye dog,” or guide dog for blind people, Smith says.

For example, if Smith gets fidgety or starts biting his nails, Tucker recognises that and jumps up on his lap to keep him company without being asked. But when asked to sit down or do tricks, he doesn’t listen.

“It’s important that he has the freedom to make the decision to know what to do and how to respond [to people’s anxiety],” he adds.