What effects can tear gas have on your health and the environment?

10,000 rounds of CS gas have been fired in Hong Kong since June. A former chemistry professor from Chinese University explains the damage it can do

6 hours ago
Your VoiceTechnology 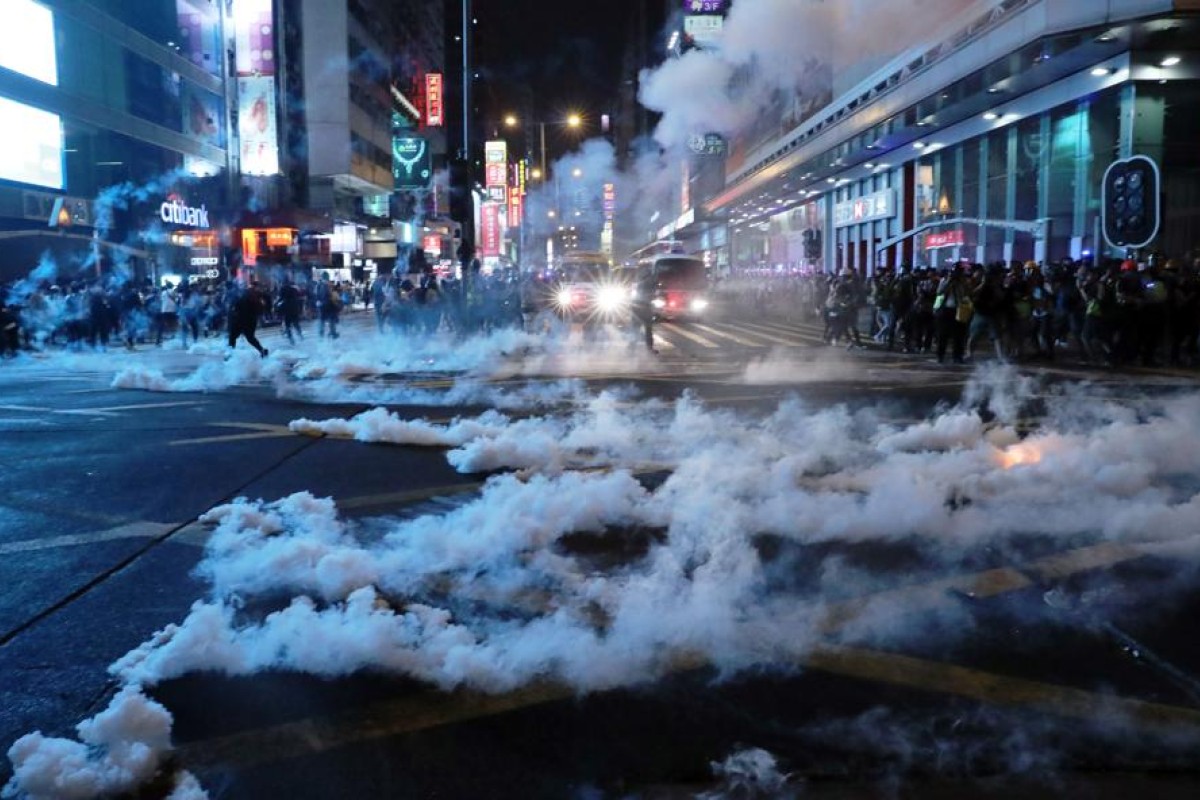 Tear gas fired by the police during clashes between anti-government protesters and anti-riot police at the junction of Nathan Road and Argyle Street in Mong Kok.

Some 10,000 rounds of tear gas have been fired by police on the streets of Hong Kong since protests first broke out in June. In some cases, hundreds of tears gas canisters have been deployed in a single night.

A week ago, local journalist Chan Yu-hong revealed he had been diagnosed with chloracne, an acne-like eruption of cysts and pustules, after exposure to tear gas. This illness is often linked to exposure to dioxins, a group of chemicals that are categorised by the World Health Organisation (WHO) as highly toxic.

Young Post spoke to Dr Kenneth Kwong Si-san, a retired chemistry lecturer at the Chinese University of Hong Kong, about what tear gas is made of, and the effects it can have on a person’s health.

What to do if you're hit with tear gas

Tear gas, also known as CS gas, is used worldwide as a riot control agent. It causes severe irritation, but is generally accepted as being non-lethal.

But last month, Hong Kong police said they had been buying tear gas canisters made in mainland China.

This, says Kwong, is what worries him.

Tear gas fired by the police during clashes between anti-government protesters and anti-riot police at the junction of Nathan Road and Argyle Street in Mong Kok.
Photo: SCMP/ Sam Tsang

Kwong says that Chinese CS grenades burn at a higher temperature than those made in Western countries. When the grenade is fired, the compounds inside, which include chlorine and organic matter, can turn into highly toxic dioxins.

Dioxins pose a serious health threat. According to the WHO, they can cause problems with reproduction and development, and change the immune system. They can also disrupt hormones and lead to cancer.

Kwong explains that when organic matter burns at a very high temperature with chlorine present, dioxin is produced.

Many types of CS gas contain both organic matter and chlorine, but the Chinese tear gas canisters contain something that their Western counterparts don’t have: metals like magnesium and aluminium.

These metals increase the temperature at which CS changes from a solid to a gas to about 650 degrees Celsius. In contrast, the US and Britain keep tear gas temperatures below 450 degrees Celsius, which limits the amount of dioxin released. Dioxin is only produced in high-temperature fires. That’s why there is significantly more present in the Chinese-made tear gas bombs.

Last week, Police Senior Superintendent Wong Wai-shun argued that dioxin is also produced by burning plastic. He accused protesters of doing more harm to public health by setting fire to plastic rubbish than the police do.

What to do if you're arrested

There are a few flaws in this claim, Kwong says. It takes both  the presence of chlorine and an extremely high temperature to produce dioxin. Kwong says there is one type of plastic, called PVC, that can potentially create dioxin when it burns, because it contains chlorine and organic matter. However, because of PVC’s toxic properties, it has gradually fallen out of use, and has been replaced by two safer plastics: PP and PE (HDPE). It would be rare for Hong Kong’s protesters to randomly find PVC in the streets.

PVC is also very difficult to burn, as it doesn’t contain as much carbon as the other two safer, more common plastics. It also needs to reach temperatures of at least 300-400 degrees Celsius to create dioxin. It’s unlikely that in an open area, protesters would find PVC, burn it, and sustain the fire, says Kwong.

But even if we know dioxin may be present in our environment, can we get rid of it?

“Dioxin can be decomposed by a special kind of ultraviolet light but you can’t find it in nature,” says Kwong. “It is also not water-soluble, so won’t dissolve in rainwater.”

Images at Polytechnic University, where students have been in a continued stand-off against police.
Photo: SCMP / Winson Wong

Dioxin can also be transferred to other organisms through the food chain. If, for example, the chemicals enter water systems through run-off, they can end up in the bodies of fish and, ultimately, humans.

There is no safe dosage of dioxin, says Kwong. “Normally, in the discipline of chemical toxicology, there’s a basic principle called, ‘the dose makes the poison’. But dioxin is an exception. A small amount can be very dangerous,” he explains.

What’s more, once dioxin enters the body, it stays there. Normally, our livers remove toxins from the body, but Kwong says dioxin can’t be removed. It simply accumulates.

“Not a lot of people are aware of how dangerous it is,” says Kwong, before concluding: “Right now in Hong Kong, we’re in the midst of an ecological catastrophe.”