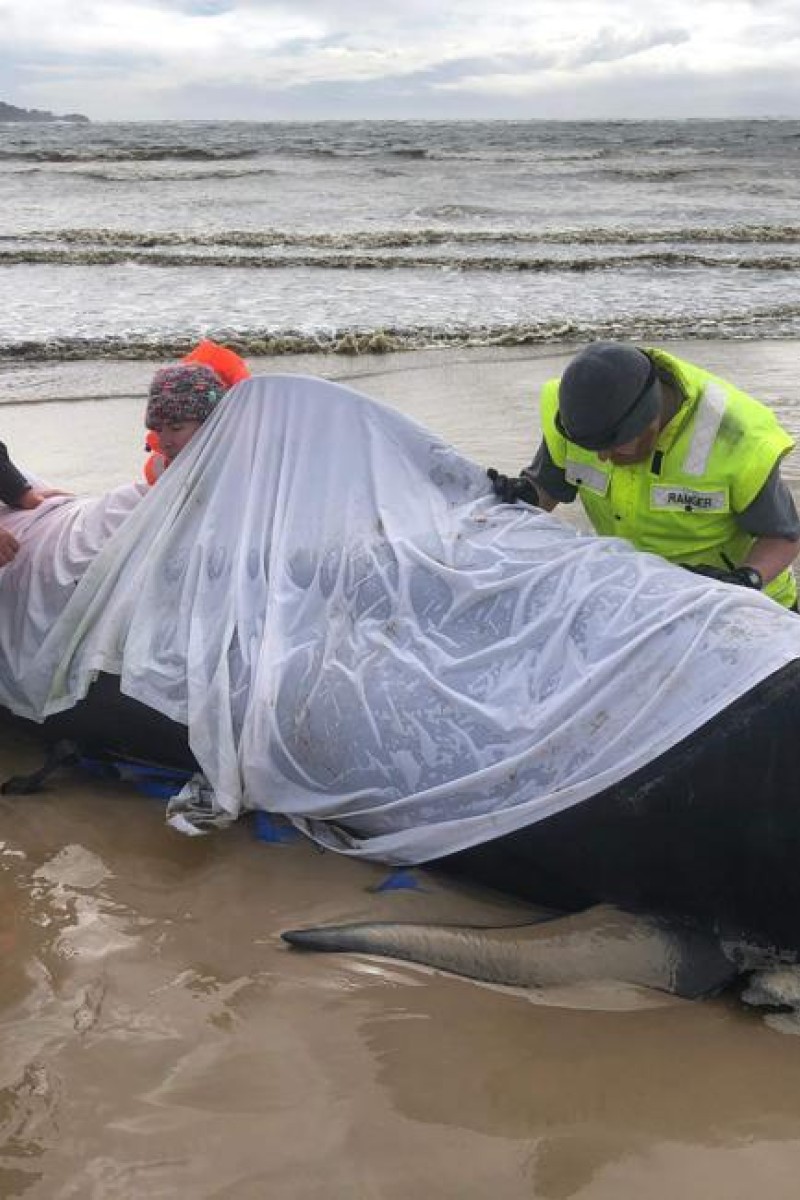 Explainer: Why do whales beach themselves? It's an enduring mystery Police in Tasmania struggle to help a pilot whale that stranded itself ashore. PhotoL Handout, AFP

Rescuers are trying to free a pod of long-finned pilot whales stranded off the Australian island of Tasmania. Around 470 whales are in the pod, more than half of which have already died, in one of the world’s biggest beachings.

Why do whales beach themselves?

It’s the question that has puzzled marine biologists for years, and continues to do so. Mass whale strandings have occurred throughout recorded modern history, and likely earlier.

While scientists don’t know the exact reason, they do know that whales - and dolphins, which are also prone to mass beaching - are very sociable animals. They travel together in pods, often following a leader, and are known to gather around injured or distressed whales.

“There are many different factors that can cause a stranding,” said Australian government marine scientist Kris Carlyon said. “Often it’s simple misadventure - one or two or a few animals get themselves into trouble and the rest of the group might follow them in.”

Many of the recorded mass strandings include long-finned or short-finned pilot whales - a species of oceanic dolphin that grows 7 metres (23 ft) long and can weigh up to 3 tonnes.

Olaf Meynecke, a whale researcher at Australia’s Griffith University, said pilot whales use sophisticated sonar to find prey and for orientation, so some theories link strandings to changes in electromagnetic fields.

“These changes can be caused by solar storms or earthquakes (seismic activities) but there is also a strong connection between active sonar, e.g. naval sonar, and dolphin strandings including pilot whales,” Meynecke said.

How are they rescued?

Refloating stranded whales from beaches and sandbanks is a labour-intensive, difficult and often dangerous task.

Several people are needed per whale to try push them back into deeper water at high tide. Harnesses and stretchers are often used, sometimes to attach a whale to a boat to be dragged out to sea.

Rescuers try to keep the whales upright to avoid disorientation.

“It’s extremely distressing for the whales, a lot like trying to find the door in a dark room while hearing your relatives scream for help,” said Meynecke.

The carcasses of those that don’t survive are disposed of by being dragged into open sea or buried onshore, both also arduous tasks.

Meet Magawa, the rat who is a real-life hero

Beaching events around the world

New Zealand and neighbouring Australia are hotspots for mass whale strandings, thanks to large colonies of pilot whales living in the deep oceans surrounding both island nations.

“They are feeding on squid in the offshore waters in these areas and it is where some of their main food sources occur supporting many thousand pilot whales,” Meynecke said.

The largest mass stranding in modern recorded history was 1,000 whales on the shores of the Chatham Islands, a New Zealand territory in the Pacific Ocean in 1918.

Pilot whales are regularly trapped in Farewell Spit, a narrow sand bar that stretches out from the most northern point of New Zealand’s South Island into the Tasman Sea for about 26 kilometres (16 miles). About 600 pilot whales beached there in February 2017.

Cape Cod in Massachusetts, a hook-shaped peninsula extending into the Atlantic Ocean, is another global hotspot, with an average of more than 200 stranded whales or dolphins each year.

More than 300 sei whales died in remote waters off Patagonia, Chile, in 2015.