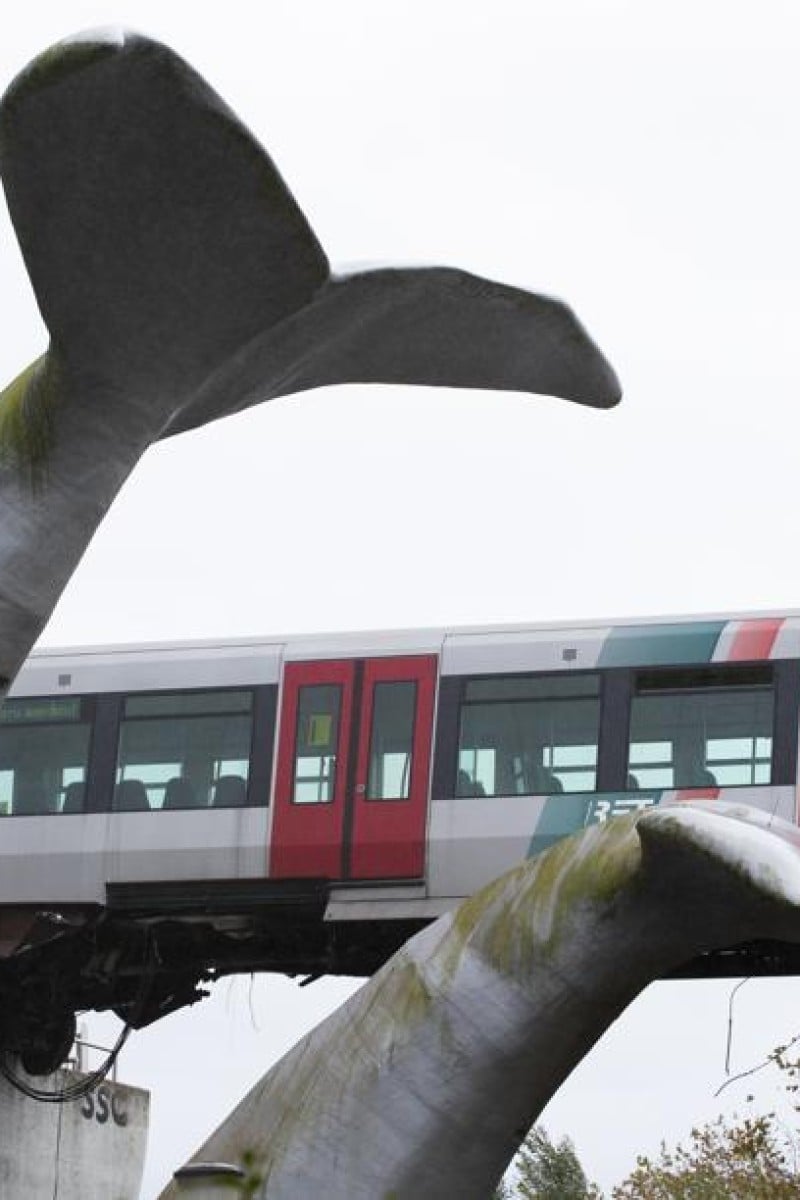 Best of 2020: Mystery monoliths, toilet paper robberies and other odd stories from the year 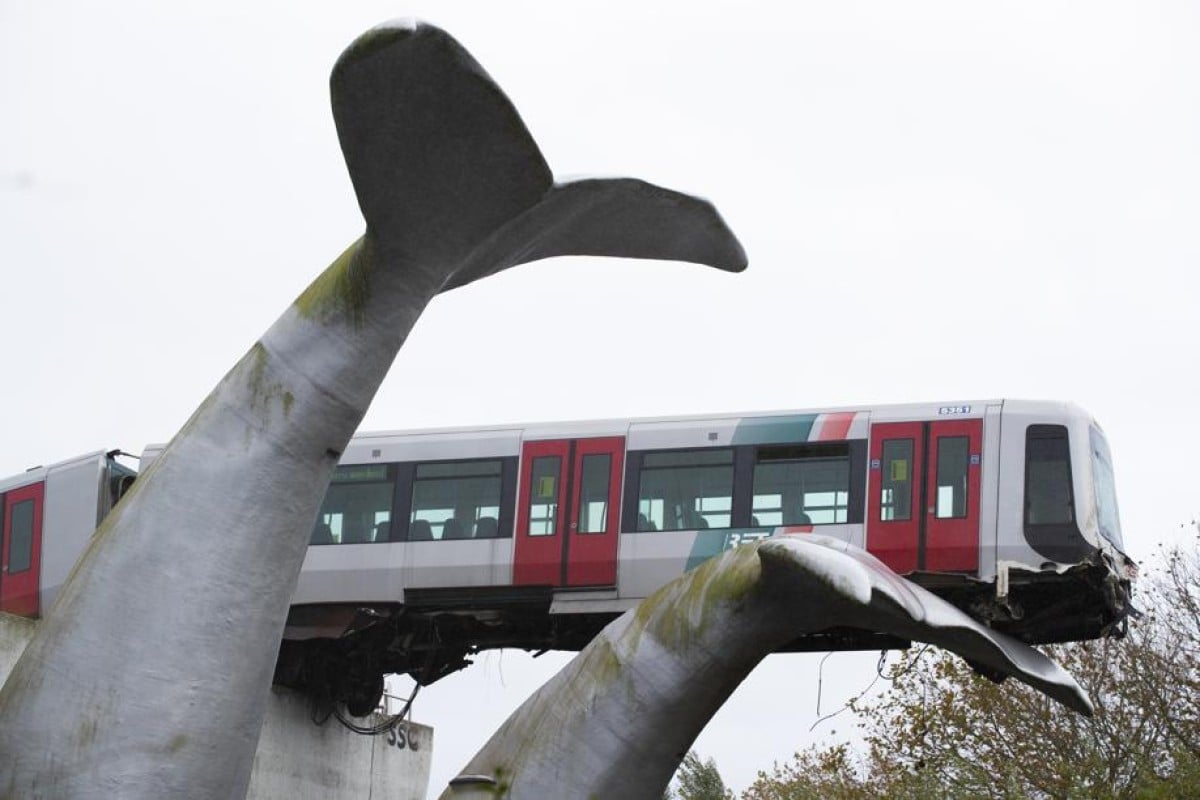 A whale tail sculpture holds the front carriage of a metro train as it rammed through the end of an elevated section of tracks in Spijkenisse, near Rotterdam, Netherlands. Photo: AP

The coronavirus has not given us much to laugh about in 2020.  Yet the year still had its fair share of the weird and the wonderful.

Here is our pick of some of its wackiest stories ...

India’s National Cow Commission unveiled a new smartphone chip made of cow dung which it claims protects users from radiation.

“All this has been approved by science,” the head of the official body set up by Prime Minister Narendra Modi’s Hindu nationalist party said.

Saying goodbye to the influential people we lost in 2020

A mysterious shiny monolith found in the Utah desert, in the US, that sparked wild rumours of alien visitations disappeared a week later. “All that was left was a message written in the dirt that said ‘Bye bitch’ with a fresh pee stain next to it,” said Riccardo Marino, who trekked to the remote spot to see it.

Days later a spookily similar monolith popped up in the Carpathian mountains in Romania. It, too,  disappeared  mysteriously as it had appeared only for other monoliths to appear in Warsaw, the capital of Poland, the Netherlands and on, and on.

Remember when mysterious monoliths appeared in cities around the world? Photo: NZME

Police were called to a supermarket in Sydney, Australia, to separate three women fighting over toilet rolls as the country went into lockdown in March.

In Hong Kong armed robbers stole about HK$1,600 worth of loo paper from outside a supermarket. Three people were eventually arrested.

The lack of something to wipe with was a real emergency for many in the US. Police in the US state of Oregon were forced to post this on Facebook: “Do not call 9-1-1 just because you ran out of toilet paper.”

Instead they helpfully suggested alternatives such as “old rope soaked in seawater”.  The police also pointed out that hardy “Mayans used corn cobs”. Ouch.

A school in Avignon, France, put a sign asking parents to stop throwing their children over a 1.8-metre gate when they were late in the morning. “I do not throw my children over the gate,”  it warned.

Taiwanese MPs pelted each other with pig organs in a row over imports of US pork.

The row over animals fed with the additive ractopamine ended with a brawl as opposition MPs emptied bags of innards on their opponents’ heads or lashed out at them with pig intestines.

A French man caught outside by police during a lockdown curfew had written that he was going out to “smash a guy’s face in” on his official exemption form.

“He had put his real name and the time he had left home,” said police, who fined him. “We told him it wasn’t a valid reason for going out.”

A British violinist played during an operation to remove a tumour from her brain so surgeons could avoid areas which might affect her playing.

Dagmar Turner, 53,  hoped to quickly rejoin her orchestra after recovering from the operation.

Violinist Dagmar Turner helped surgeons avoid damage to her brain during surgery to remove a tumour by playing her instrument, the UK hospital where she underwent the innovative procedure said. Surgeons came up with the novel approach to ensure areas of Turner's brain responsible for delicate hand movement were not affected during the precision procedure. Photo: AFP

A giant sculpture of the tails of two whales saved a runaway train from disaster, stopping it falling 10 metres into a canal near Rotterdam, in the Netherlands. Its creator, architect Maarten Struijs, said the train suspended in mid-air by the tail was a work of art in itself.

Two tame emus were banned from a pub in the Australian outback town of Yaraka after they learned how to climb the stairs, get behind the bar and steal sandwiches as soon as they popped out of a toaster.

“We put a sign up, but we’re not sure whether they’re able to read,” said hotel owner Gerry Gimblett.

A Swiss couple named their baby daughter after an internet provider because it offered free Wi-Fi for 18 years to anyone who named their child Twifia.

And in India, a little boy was named “Lockdown” by his parents while another child born in the southwest of the country – Corona Kumar – will forever bear the mark of the pandemic.

Japan – famous for its heated musical thrones – made another major leap in toilet technology when it unveiled see-through public lavatories in a Tokyo park.

The loos allow people to inspect their cleanliness from the outside before using them. But when someone goes in to a stall,  the glass magically stops anyone outside seeing in.

Snakes on a bus!

A passenger on a bus in Manchester, Britain, who didn’t have a mask wrapped a python around his face instead.

While other passengers didn’t care, authorities said their loose definition of face coverings “does not extend to the use of snakeskin – especially when still attached to the snake”.

While astronauts can pee and poo in their spacesuits, US  space agency Nasa has asked inventors to come up with a proper toilet for their next moon mission, with waste being stored or flushed out into space in “a shower of sparkling frozen crystals”.