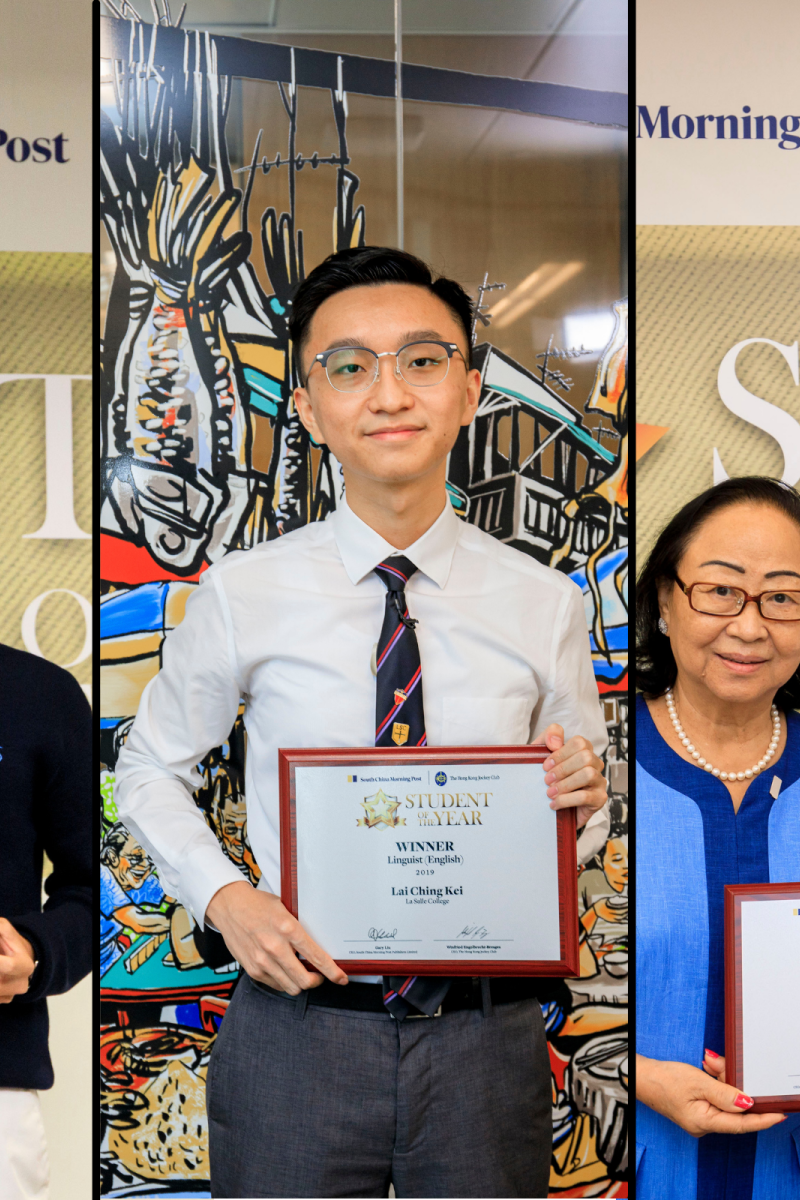 Language is a fundamental aspect of human existence. And in an international city like Hong Kong, with people expected to be fluent in two or three languages, that means getting in touch with those from all levels of society.

That is the kind of “world city” – which welcomes people from all types of backgrounds – that is dear to the heart of La Salle College’s Oliver Lai Ching-kei, the winner of the SCMP Student Linguist of the Year Award (English category).

“I feel more emphasis will be placed on Putonghua in Hong Kong, with English as a ‘third language,” he said. “I hope that people will treasure English [proficiency], because it is one of the most important things that helps maintain the image of Hong Kong as an international city. We need to protect this bilingual culture.”

Best Devotion to School winners hope to change the world

Oliver believes language skills should be paired with a good knowledge of current affairs, gained from paying attention to the news. “Knowing English isn’t just about knowing the language, but also applying it,” he says. “Keeping up with current affairs is part of that application and how to use it in society.”

Rachel Cai Rui-zhe from Diocesan Girls’ School, winner of the Putonghua category, believes it is essential to promote a common language in Hong Kong. “Language is the essence and root of our culture; by understanding each other’s language, we can understand each other’s culture,” she explains. “By remaining tolerant and respectful, we forge friendlier relations.

“If we can promote the language [Putonghua} here, we can surely foster a more harmonious relationship between the people of Hong Kong and the mainland.”

Charlie Lin Kai-chun, a Form Four student from Bishop Hall Jubilee School, took home the prize for the Cantonese category. He credits his success to his mother tongue, Cantonese.

He says the language has a special place in his heart, as it encapsulates the collective memories and culture of Hong Kong. “Cantonese remains strong within the local community as a tradition, our mother tongue, and our self-expression, such as Canto-pop.”

Charlie says he will use his Cantonese skills to debate, write and help underprivileged people.

“I chose Cantonese because I am able to put my language skills into practice, and offer help to people who are in need,” Charlie says.

Visual Artist winner believes in the power of empathy

He once went to Kowloon City – well-known for its Thai cuisine – to promote his beloved language among Thai students who do not speak it. “Even though many of them study in local schools, they are not very fluent in Cantonese and they do not blend well with their peers,” he says.

He took them to different places in Hong Kong and spoke to them in Cantonese, to help them become more comfortable with the language.

Charlie realised that language can work wonders when he travelled to Cambodia where he taught English, Putonghua and Cantonese to a group of orphaned children.

“Usually English is the only language most volunteers teach, as this is the most important language to the people in the country,” he says. “But we also taught them Cantonese and Putonghua so that they know different languages when they meet tourists from different countries, or if they work in the tourism industry.

Nominations are now open for Student of the Year 2021!

“Many children there live in poverty, but their lives would become very different if they were able to master different languages.”

When asked what his favourite Cantonese saying is, Charlie says he is deeply inspired by his school motto –「非以役人、乃役於人」– which literally means “I am not born for myself alone” in English.

He believes that he has a mission to promote Cantonese and does not agree that Cantonese is merely a dialect.

“While Putonghua has four tones, Cantonese has nine. We should preserve and treasure these nuances in our language,” he says. “Cantonese should never be belittled just because it is colloquial.”

The Student of the Year awards are organised by Young Post and the South China Morning Post and sponsored by The Hong Kong Jockey Club.