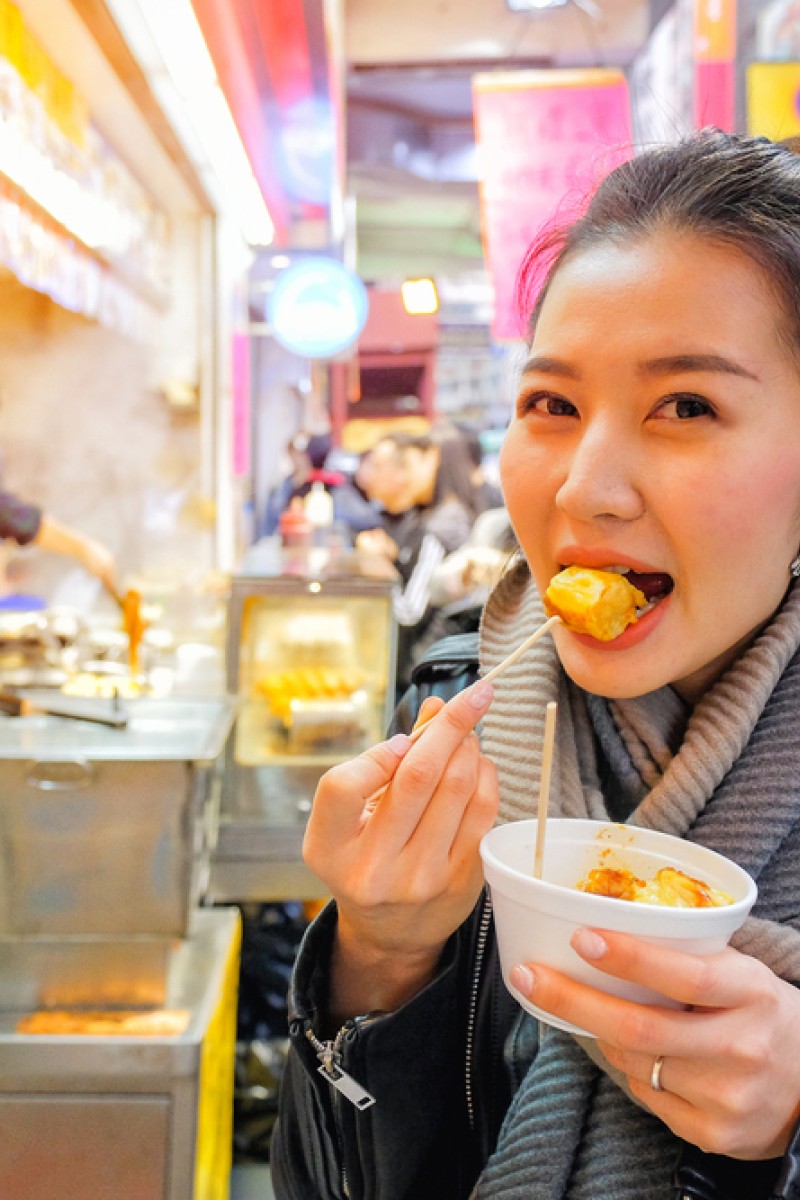 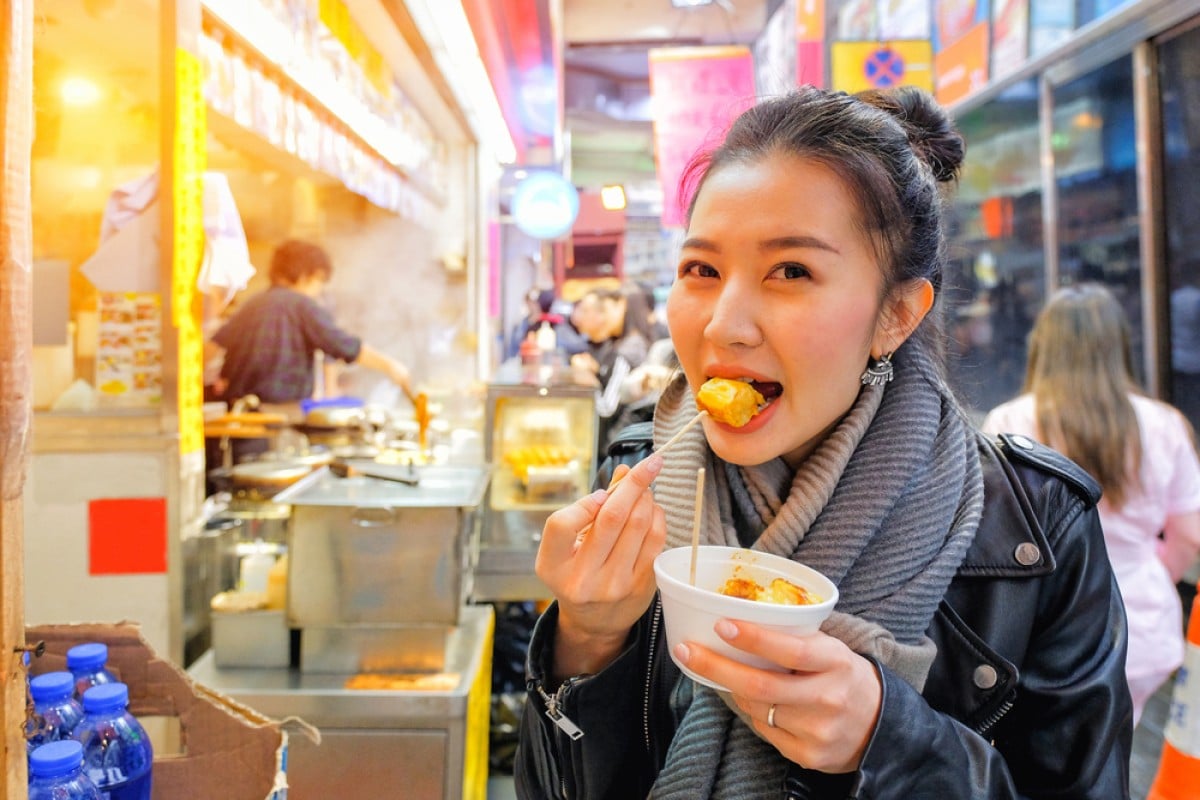 Hong Kong is famous for its diverse street food – from curry fish balls and siu mai to stinky tofu and fried pig intestines. Hongkongers call it “sou gaai” (sweep the street) when they’re having a meal of assorted street food from different stalls.

In recent years, there has been a mix of flavours and old-meets-new snacks that you can’t find anywhere else. They aim to appeal to both locals and tourists. Examples include multi-flavoured egg waffles, souffle pancakes, and soba (Japanese noodles) topped with garlicky hand-shredded chicken. Of course, there are hits and misses.

Due to the stringent hawker licensing policy in  Hong Kong, there are no night food markets here like  in Taiwan. But more food stalls have opened indoors – in shopping centres or residential buildings. Some of the popular street food spots are Mong Kok, Kwai Chung Plaza and Tai On Building, in Sai Wan Ho.

【狗仔粉】- gau2 zai2 fan2 – “doggy’s noodles” Meaning: A noodle snack made of glutinous rice short noodles and seasoned with mushrooms, onions, dried shrimp and pork’s fat in a rich broth. It was a popular street food back in the 50s and 60s and was considered a grass roots treat. But a chain restaurant brought it back and it was listed as a recommended street food under the Michelin Guide Hong Kong in 2016. Example: You just can’t get enough of gau zai fan once you’ve tried it.

Hunt down these flavours:

【風味】– fung1 mei6 – “wind-flavour” Meaning: “Fung” in Cantonese has multiple meanings: it refers to “wind” and its conceptual meaning includes “style”. “Fung mei” refers to a local, traditional flavour of a food’s origin. Locals use this word to describe how faithful the flavour is to the country where the food originated. In English: authentic / traditional taste Example: These beef noodles really have Taiwanese fung mei!

【避風塘 (口味)】–  bei6 fung1 tong4  – “typhoon shelter (flavour)” Meaning: This flavour comes from the classic dish “typhoon shelter-style  stir-fried crab” in Cantonese cuisine. “Typhoon shelter” refers to the place where fishermen seek refuge during  a typhoon. This flavour is achieved using simple ingredients that fishermen would use to cook seafood, such as garlic, ginger, spring onion and chilli. This stir-fried seasoning produces a unique savoury flavour that brings out the freshness of the seafood. Today, the typhoon shelter flavour is often found in street snacks as well.  In English: typhoon shelter-style flavour Example: The bei fung tong fried squid is the signature dish here. We have to try it!

【拉絲芝士】– laai1 si1 zi1 si4  – “stringy and gooey cheese” Meaning: The phrase is often included in the food name to describe how gooey the cheese is to attract more customers. The saying is sometimes overused by food shop owners and is sometimes considered an exaggeration. In English: melted cheese Example: I see food with laai si zi si  everywhere these days.

7 things to do in HK this week: From photos at Choi Hung to delicious street egg waffles

【惹味】– ye5 mei6  – “flattering taste” Meaning: It’s used to describe how rich and tasty the food is. Example: The black pepper sauce for the fishballs is very ye mei.

【鑊氣】– wok6 hei3 - “the breath of the wok” Meaning: It refers to how food is cooked over a high flame, stir-fried and tossed quickly in a seasoned wok to bring out its flavour and aroma. It’s a compliment on how well the food is cooked in terms of flavour, texture and smell. Example: The chef’s cooking has rich wok hei.

Idiom of the week:

【一掃而光】- yat1 sou3 yih4 gwong1 – to sweep everything out Meaning: The second word “sou” means to sweep; the word refers to clearing / emptying everything.   Apart from the meaning of cleaning, it could be used in different contexts. For example, it could be used to talk about shopping, eating or even emotions.  This word has the same idea in the slang “sou gaai”. However, “sou gaai” has another meaning in Taiwanese. In Taiwan, “sou gaai” refers to politicians who go onto the streets and get support from citizens. In this sense, it means to “sweep all the votes”.  In English: to sweep away or empty out something Example:  After Pete has had his street food crawl, all his stress is yat sou yih gwong.

Bonus: Check out these additional street food-related sayings in Cantonese