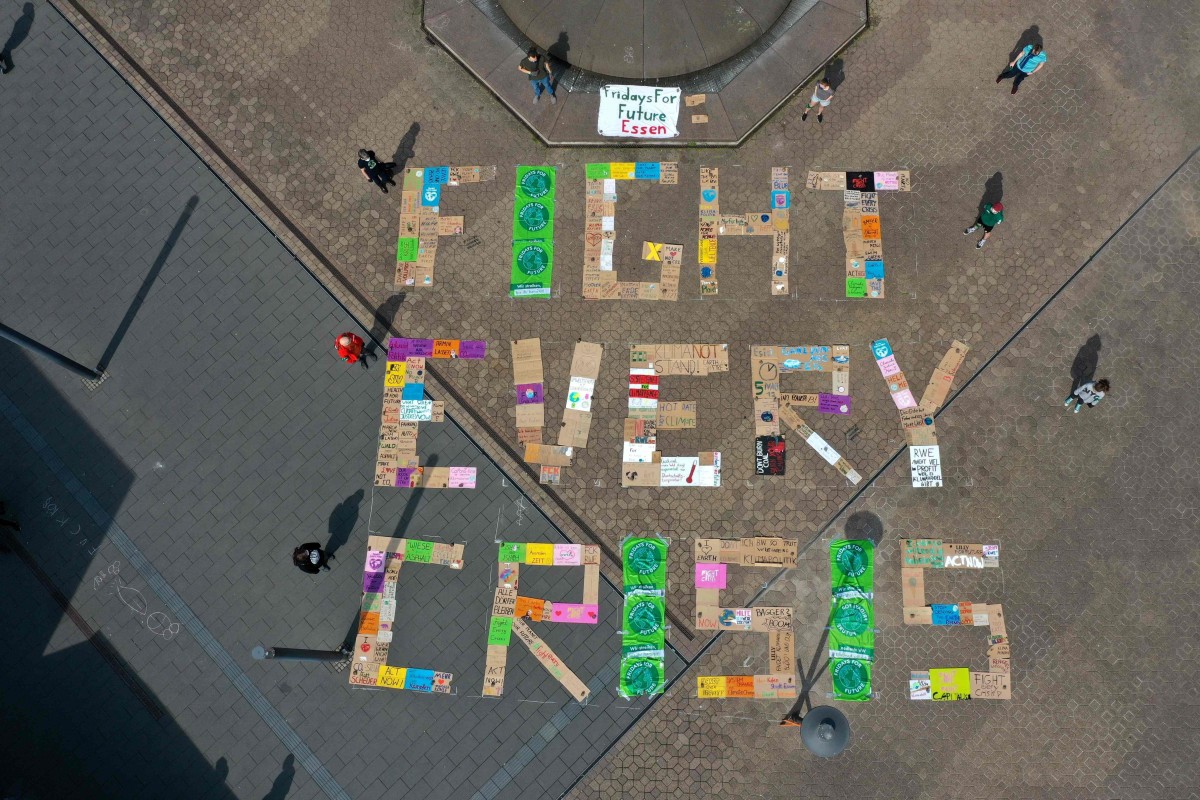 An aerial view shows demonstrators of the Fridays for Future environmental movement practicing social distancing as they stand next to placards arranged to form the words 'fight every crisis' in front of the city hall in Essen, western Germany, on April 24, 2020. Photo: AFP

Rather than taking to the world’s streets to demand climate action on Friday as planned before the coronavirus pandemic, young activists from about 20 countries took to Youtube in a 24-hour broadcast to share ideas on how to fight global warming.

In recent weeks, lockdown restrictions in many places have made it impossible for the Fridays For Future movement of young people to skip classes and march through cities or hold vigils outside government buildings in their usual Friday protests.

As a substitute, they have been posting photos of themselves at home with their banners and placards, using hashtags such as #DigitalStrike and #FightEveryCrisis.

They have also participated in webinars and video discussions to boost awareness and knowledge about tackling climate change.

On Wednesday, Greta Thunberg, 17, the Swedish founder of Fridays for Future, told an Earth Day event she did not think the global climate movement would “lose time” because of the Covid-19 health “tragedy”, which has caused the cancellation and postponement of key demonstrations, gatherings and UN talks.

“I think we will come back out of this crisis even stronger and even more motivated,” she said.

Activists of the Fridays for Future movement placed protest posters for climate protection in front the German parliament building the Reichstag in Berlin, Germany, Friday, April 24, 2020. Because of the continuing spread of the coronavirus, the climate strike will be digitally distributed on the Internet. Photo: DPA

Asked how individuals could do their bit to keep pressing for a greener world, she urged listeners to start with informing themselves and trying to understand the “climate crisis”, and talking to others about it to shape public opinion.

Young people did exactly that on Friday, with hundreds tuning into a YouTube livestream to watch their peers from Australia, Syria, Pakistan, Kenya, Israel, Poland and Brazil, among other countries, discussing their experiences.

Hong Kong climate change activists on how they handle ‘eco-anxiety’

They discussed potential ways to create a more sustainable world, from restoring forests to switching to clean energy, and better protecting wildlife to avert the spread of animal-carried viruses like Covid-19 to humans.

Caroline Danaher from Australia said she had watched on and off all day.

“So encouraging - learning more than is possible in the media and learning that we are so much bigger than we think we are,” she said in a comment posted on the YouTube stream.

How to recycle everything in Hong Kong

In a statement on Friday’s global digital actions, international climate campaign 350.org - which has supported young people’s efforts - said youth strikers were seeking “a just recovery from the pandemic that puts people and the planet over profits”.

Eric Damien Njuguna, a striker from Kenya’s capital Nairobi, said Covid-19 was not a ‘one-off’ event “from which we can just return to business as usual”.

“We must recognise and fix our broken systems and build back better,” he added. “Any government intervention needs to put people and the climate first, not corporate polluters.”

An activist of the Fridays for Future movement wearing a face mask holds a placard during a rally in the city centre of the German city of Halle. Photo: DPA

In Russia, where street protests are difficult even without coronavirus restrictions, young activists were posting art and photos of themselves at home with the hashtag #ClimateStrikeOnline, and using the video app TikTok.

In the south Pacific island state of Vanuatu, battered by Cyclone Harold this month, Fridays For Future members were asked to film and record messages to send to local TV and radio channels to play during commercial breaks.

The German branch of the movement created a giant art piece by laying out thousands of protest signs on the grass in front of the national parliament building.

Vanessa Nakate, a well-known youth striker from Kampala in Uganda, posted a photo on Twitter of herself in her garden with a cardboard sign sporting the message in red capitals: “Don’t pretend climate change is not happening! Rise up and act now”.

While digital channels could provide a platform during the coronavirus pandemic, many Ugandans do not have reliable access to a phone or the internet, Nakate noted.

“These are also often people that are already most affected by the climate crisis”, whether in the form of droughts, flooding, landslides or the current locust invasion, she said.

“So it is up to those of us who have platforms during this time of lockdown to use our voices to speak for them,” she added.