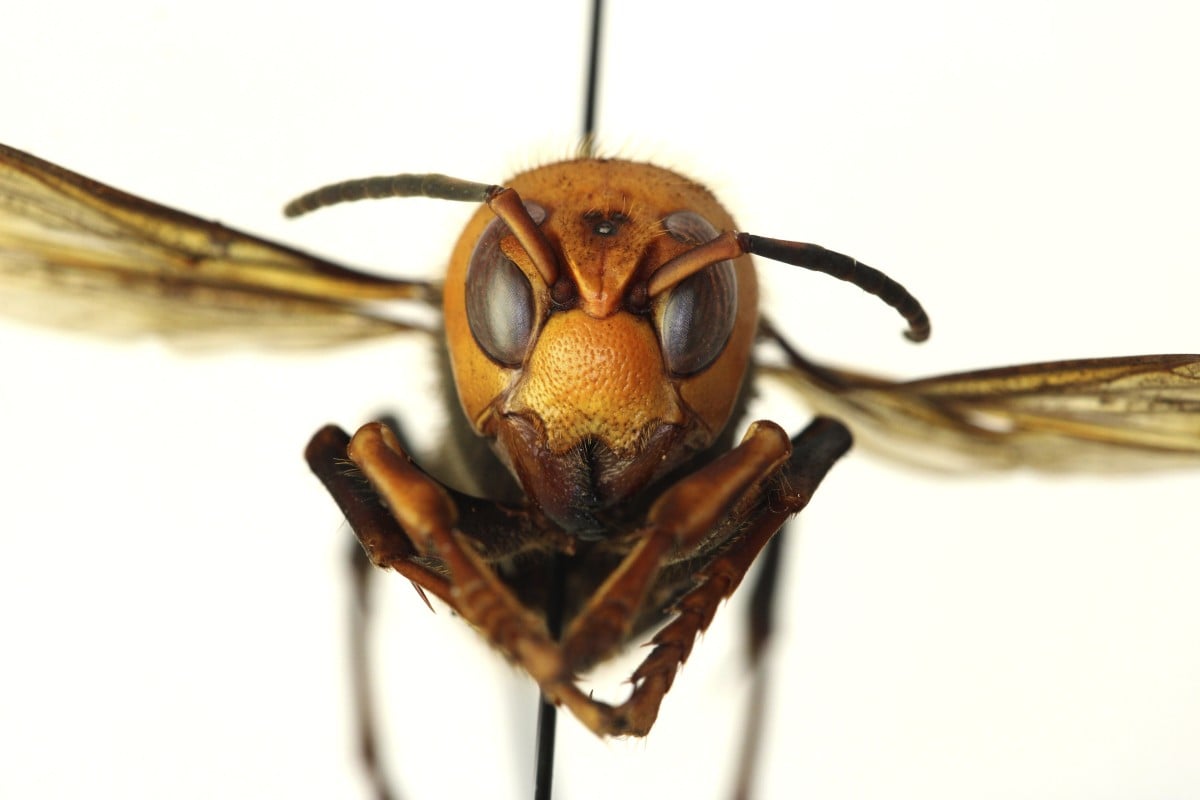 The world's largest hornet, a 2-inch long killer with an appetite for honey bees, has been found in Washington state and entomologists are making plans to wipe it out. Dubbed the "Murder Hornet" by some, the Asian giant hornet has a sting that could be fatal to some humans. It is just now starting to emerge from hibernation. (Quinlyn Baine/Washington State Department of Agriculture via AP)

A predatory insect nicknamed the “murder hornet” has turned up in the US state of Washington, near the Canadian border, where they pose a threat to humans and the beekeeping industry.

The stinging Vespa mandarinia, more commonly known as the Asian giant hornet, can grow as large as 2-1/2 inches (6.35 cm) in length and is native to Southeast Asia, China and Taiwan. It was first discovered in Blaine, Washington, in December by a homeowner, according to Sven-Erik Spichiger, managing entomologist at the Washington state Agriculture Department.

“An Asian giant hornet can sting you multiple times and deliver larger doses of venom just because of the size of them. The venom itself is fairly toxic and creates localised necrosis around the wound, so you’ll see melting flesh around the wound,” Spichiger told Reuters.

“What we’re told from the literature is that most people can survive one or two stings,” he said. “But if you sustain multiple stings, the necrosis and the venom will actually start getting into your bloodstream and will start working on your organs. And multiple stings could literally be fatal.”

Aside from the danger to humans, the Murder Hornet presents a danger to agriculture and the apiary industry, Spichiger said, because the insect is known to attack honey bees, with a few of the hornets capable of wiping out an entire hive in hours.

“The hornets enter a ‘slaughter phase’ where they kill bees by decapitating them. They then defend the hive as their own, taking the brood to feed their own young,” according to the Washington state Department of Agriculture website.

How to cope with eco-anxiety

“Pollination is a huge part of agriculture and the agricultural systems we have here in the United States. And so if this were to become well-established and then start spreading, it could be pretty catastrophic,” Spichiger said.

Scientists don’t know for sure how the Murder Hornet made its way to Blaine. The most likely scenario is that it arrived on a container ship docking at one of Washington’s ports. Intentional transport of the killer bug into the United States would violate federal law.

Following the discovery of the first hornet, a web page set up by Washington state agriculture officials to report additional sightings of the insect has received several hundred reports, Spichiger said.

Anyone coming across a nest should immediately alert authorities. While the hornets do not generally target people or pets, they can attack when threatened.

“We really don’t want any private citizen trying to mess with an Asian giant hornet nest. Typical beekeeping attire will simply not protect you. The stinger on this insect is six millimeters long and will go readily through most clothes,” Spichiger said.