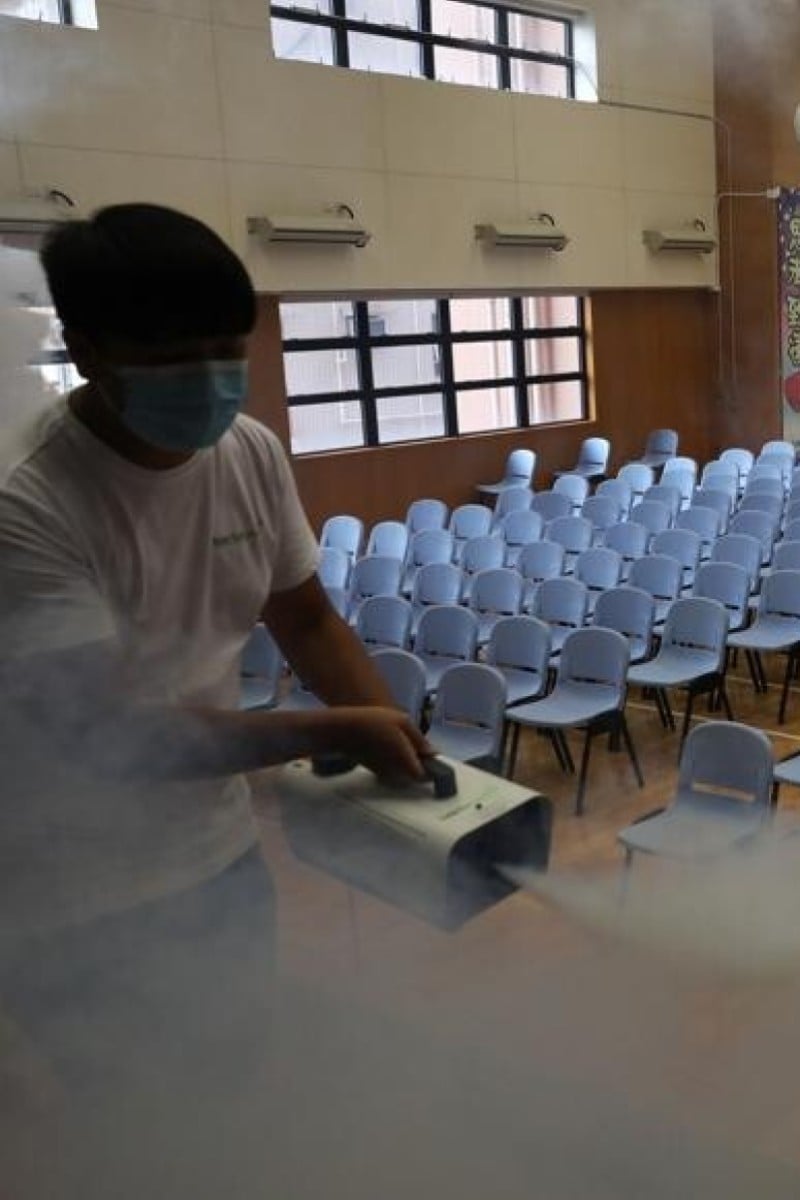 Schools are taking disinfection measures ahead of the planned May 27 return to school.

Hundreds of Hong Kong schools are preparing for a phased resumption of classes in two weeks, and some have decided to step up coronavirus disinfection measures by spraying their entire campus with an antibacterial protective layer and equipping their libraries with book sanitisers.

All schools resuming classes amid the pandemic are required to follow a set of guidelines issued by the government on Wednesday.

Under the guidelines, objects frequently touched by students – including books, toys, shared objects and floor surfaces – should be cleaned and disinfected at least twice a day with diluted bleach.

At SKH St James’ Primary School near Wan Chai, principal Cheung Yung-pong said apart from thoroughly cleaning the campus with diluted bleach, an antibacterial mist treatment would be carried out in all indoor areas including classrooms, toilets and the school hall.

“In that way, most of the objects indoors will be covered with a protective layer, such as desks and chairs, white boards and display boards. Plus, the protection can last for up to three months … which would cover the period until pupils go on summer break,” he said.

The company that provided the mist treatment service said that about 20 other primary and secondary schools also planned to undergo the move.

Cheung added that the school library might not be open to students when classes resumed in June, though borrowing and returning books could be allowed, and an antibacterial book sterilisation machine that uses ultraviolet rays had been installed.

The guidelines issued by education and health officials on Wednesday said students should stay at least a metre apart inside classrooms and when lining up at the toilet or tuck shop. They are also to face the same direction during meals to avoid face-to-face interactions.

Cheung said his school was also considering splitting students into groups and placing them in different designated areas during recess.

Apart from installing three infrared temperature-screening machines at its entrances, the school has also bought two robots to remind students to keep up hygiene measures.

While some experts have suggested officials might need to reconsider the return date for younger primary school students following the discovery of new local cases this week, Cheung said he believed face-to-face classes could still resume as planned as the new infections were all within one family.

“Our sector and many parents still hope for face-to-face classes to resume, especially after such a long term of class suspension,” said Cheung, who is also honorary chairman of the Aided Primary School Heads Association.

He said most primary schools would shorten the summer holiday by one to two weeks, with most pupils being able to begin their break by the end of July.