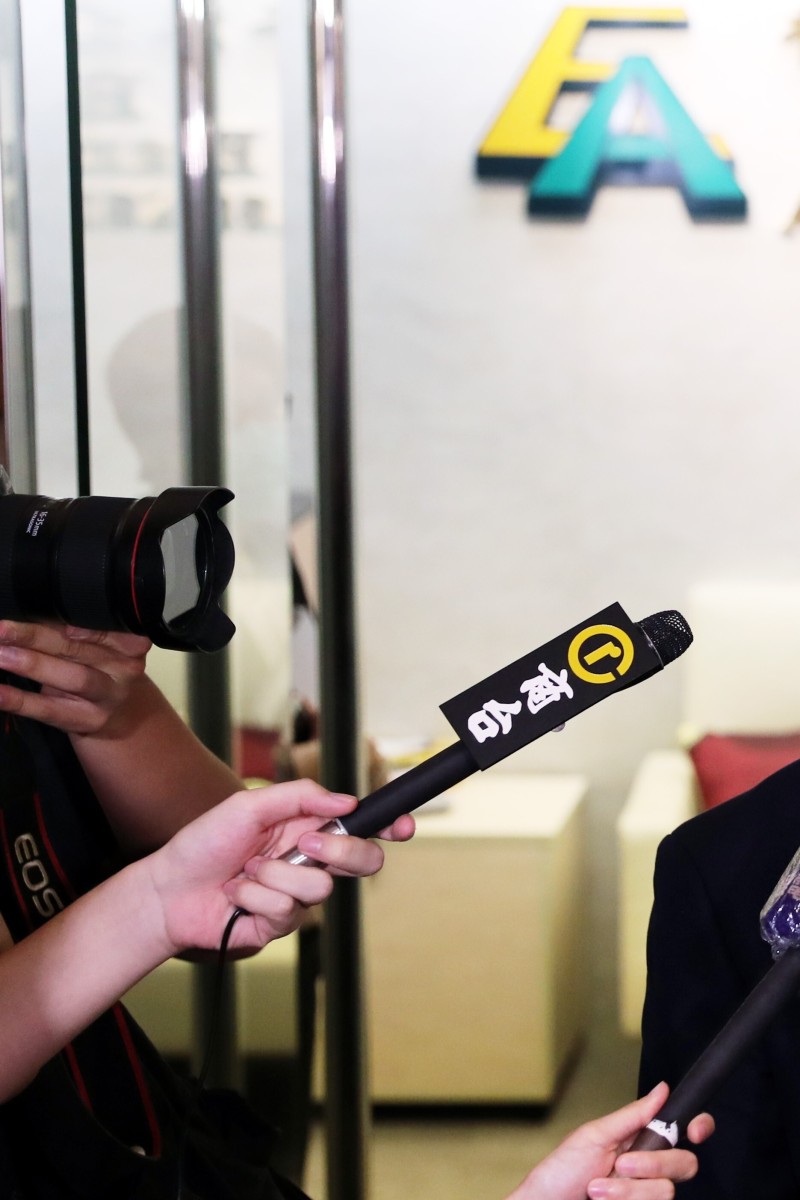 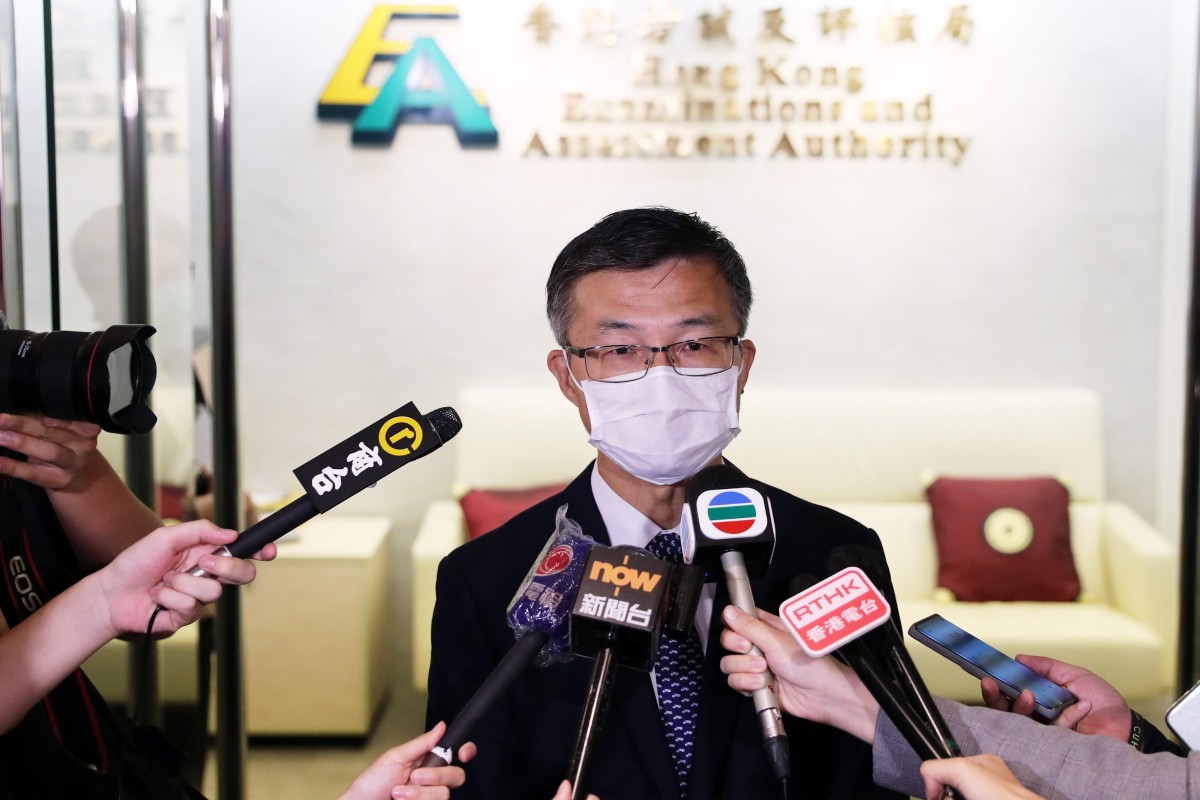 Secretary General of Hong Kong Examinations and Assessment Authority (HKEAA) Dr. So Kwok-sang speaks to the press outside HKEAA. The exam authority has been requested by the Education Bureau to scrap a question in the Diploma of Secondary Education (DSE) exam.

UPDATE Friday, 6.50pm: In an evening announcement, the exam authority officially confirmed the invalidation of the controversial question, saying the question was not able to asses students fairly and did not follow principles of handing sensitive issues when setting exam questions. Students will have their results calculated in one of two ways, with the results taken from the one which is higher.

They will have their results calculated from their performance in Paper 1, 2a  and 2b, as the question tests their knowledge on the same historical topic.

Alternatively, their grades will be estimated from their scores in Paper 1, 1c, 3c and 4c, as the sub questions tested their ability in the same skill.

ORIGINAL STORY: The Hong Kong Exam Assessment Authority has decided to scrap a controversial exam question on the DSE about early 20th century Sino-Japanese relations, giving in to an unprecedented request made last week by the Education Bureau.

The decision, which followed a second special meeting on the matter on Thursday, affects 5,200 candidates who sat the Diploma of Secondary Education (DSE) exams a week ago and were asked if they agreed Japan “did more good than harm” to China between 1900 and 1945. Their answer was to be based on two related reading materials and their own knowledge.

A quick guide about the National Security Law proposed by Beijing

The two excerpts included one from 1905 that discussed a Japanese plan to allow Chinese students to study law and politics there, and a second that covered revolutionary leader Huang Xing’s seeking of financial help from a Japanese politician in 1912.

A six-hour meeting by the Hong Kong Examinations and Assessment Authority’s (HKEAA) council on Monday had been unable to reach a decision as to whether the question should be cancelled, although members agreed to cooperate with education officials on a review of the existing question-setting mechanism.

The bureau issued a statement later that night, reminding the statutory body of its duty to comply with directives issued by the chief executive.

What to expect at China’s National People’s Congress

On Tuesday, city leader Carrie Lam Cheng Yuet-ngor had called the question “a mistake” and hinted she could use her office’s powers to invalidate the question if necessary to “safeguard the quality and aims of education and protect students”.

The bureau first lashed out at the HKEAA last week, just hours after the test, for setting what it said was a leading question that used biased reference materials, and ignored the feelings of the Chinese people who suffered during the Japanese occupation between 1937 and 1945.

Education officials officially requested the question be dropped the next day, saying exams should not lead students to weigh the potential positives of such right and wrong issues as invasions and ethnic cleansing.

Beijing’s foreign ministry arm in the city and pro-establishment groups including the Hong Kong Federation of Education Workers were the first to call the question problematic. Their appeal was later echoed by state news agency Xinhua, which said it was “poisonous” and warned it would stir the “rage of all Chinese sons and daughters”.

A survey conducted by the Professional Teachers’ Union on Wednesday, which polled 268 history teachers, found an overwhelming 97 per cent were against removing the question, citing reasons including its value as a test of candidates’ knowledge of the time period.

If the question were to be cancelled, a majority worried it would be unfair to candidates who performed well on it and damage the credibility and reliability of the DSE exam.

What do students think?

Young Post spoke to four candidates who took the exam and received unanimous objection to the cancellation of the question, citing perceived unfairness.

“In principle, there is no problem with the question; it’s obviously political interference into academic freedom,” said Adrian Choi, 18. “I have also spoken to some tutors who suggested the reason why the data given was one-sided was to avoid giving an advantage to students who took Chinese history as well, which has the Japanese invasion of China in the syllabus.”

Jacky Tsoi, 18, was shocked and disappointed by the decision. “I didn’t expect this to happen in Hong Kong, for political concerns about nationalistic feelings to lead to an exam question being disqualified,” he said.

He also found it funny that an article written by Hong Chan Tsui-wah, Deputy Secretary for Education, part of the bureau’s senior directorate said, “it is unreasonable and meaningless to expect a secondary school student to use their own knowledge to answer a question beyond their ability in 20 minutes.”

“Studying history for three years and using our own knowledge to make a critical analysis is the point of the course. The EDB wrote the syllabus,” he quipped, adding that he spent around 20 minutes answering the question.

But while he feels cancelling the question would set a bad precedent, he worries more about the impact on other students than himself. “I’m confident in my performance on the entire paper; some other students might not have that.”

Cash Chan, 18, believes it is an infringement on freedom of speech and is unreasonable and unfair. “I spent all that time and effort revising for and doing the exam. The question was fine and it asked us to use our own judgement.”

Johannah Naynay, 17, also objected to cancelling the question and thought it unnecessary, but could see how it would make sense. “Some stakeholders would feel offended or upset by the question because of how it can be seen as biased and covering a sensitive issue,” she said. “In Liberal Studies, a sensitive question about press freedom came up as well; both questions require critical thinking and ask us to use our judgement to make an analysis.”

“I don’t know how the points allocation will work or affect my grades, and that’s worrying. ”