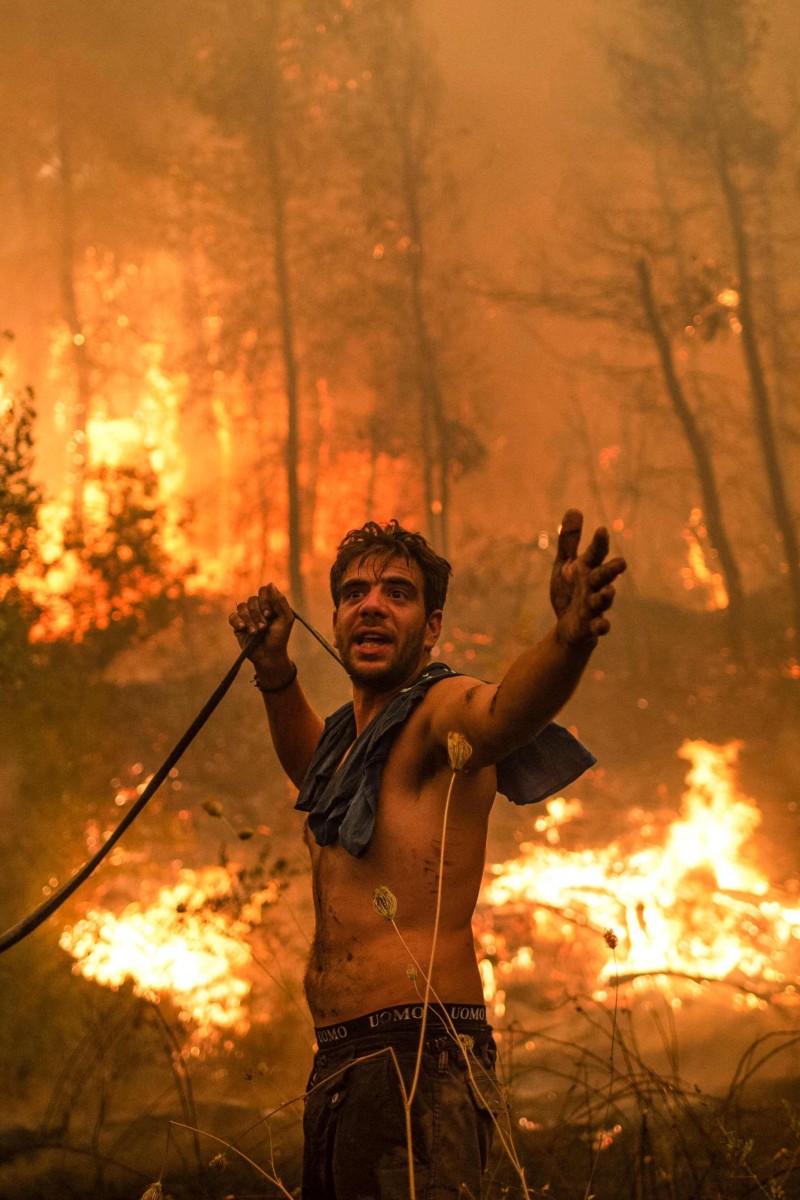 Experts say there’s no turning back on climate change now 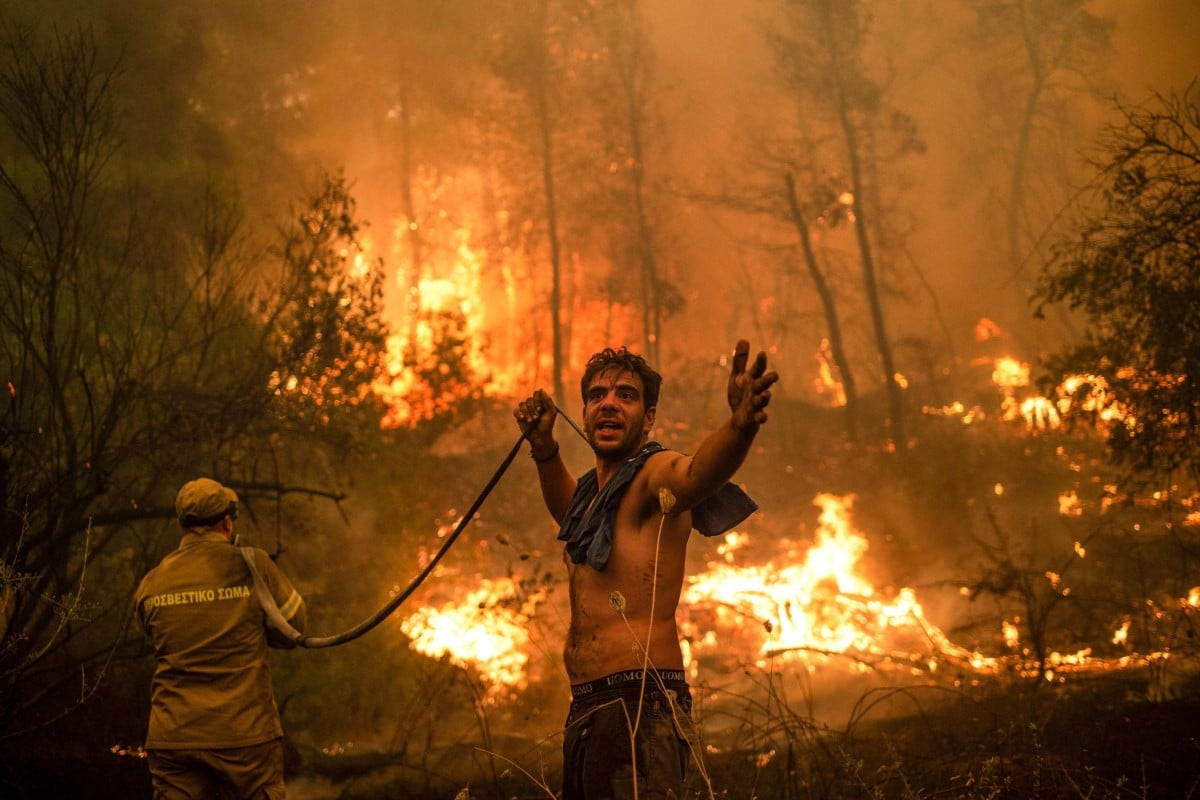 A resident holds an empty water hose during an attempt to extinguish a wildfire on Evia Island, Greece, in August. The region suffered its worst heatwave in decades, which experts have linked to climate change. Photo: AFP

Across a quarter century of UN climate conferences tasked with saving humanity from itself, one was deemed a chaotic failure (Copenhagen/2009), another a stunning success (Paris/2015), while the rest landed somewhere in between.

This year’s COP26 inspired all these reactions at once.

Swedish activist Greta Thunberg, leading a 100,000-strong march through the streets of Glasgow, dismissed the two-week meet as a “greenwashing festival”.

Some experts, on the other hand, hailed solid – even historic – advances in beating back the existential threat of global warming, while observers wavered between approval and criticism, hope and despair.

“The Glasgow Climate Pact is more than we expected, but less than we hoped for,” Dann Mitchell, head of climate hazards at Britain’s Met Office said.

Gauging the efficacy of measures announced at the COP26 summit largely depends on the yardstick used to measure them.

Compared to what came before, the first-ever call by 196 countries to draw down coal-fired power, or a promise to double financial aid each year – to roughly US$40 billion – so poor nations can brace for climate impacts, are giant steps forward.

Likewise a provision obliging countries to consider setting more ambitious targets for reducing carbon pollution every year rather than once every five years.

But all these hard-won gains at COP26 shrivel in significance when stacked up against hard science.

An unbroken cascade in 2021 of deadly floods, heatwaves and wildfires across four continents, combined with ever more detailed projections, left no doubt that going beyond the 1.5 degrees Celsius (2.7 degrees Fahrenheit) heating limit envisioned in the Paris Agreement would push Earth into the red zone.

Typhoon Rai, which hit the Philippines in December, has left at least 375 people dead and hundreds of thousands of residents without homes. Photo: AP

“As a lifelong optimist, I see the Glasgow outcome as half-full rather than half-empty,” said Alden Meyer, a senior analyst at climate and energy think tank E3G.

“But the atmosphere responds to emissions – not COP decisions – and much work remains ahead to translate the strong rhetoric here into reality.”

‘Hong Kong’s Greta Thunberg’ may have moved to Britain, but his fight for action against climate change isn’t over

It found that global heating is virtually certain to pass 1.5 degrees Celsius, probably within a decade. Meanwhile, ocean levels are rising faster than anticipated, and will do so for centuries.

And forests, soil and oceans – which absorb more than half of humanity’s carbon pollution – show signs of saturation.

Then there is the threat of “tipping points” that could see permafrost release massive amounts of CO2 and methane, the Amazon basin transformed into savannah, and ice sheets shedding enough mass to submerge cities and deltas home to hundreds of millions.

“Make no mistake, we are still on the road to hell,” said Dave Reay, head of the University of Edinburgh’s Climate Change Institute. “But Glasgow has at least created an exit lane.”

In the Arctic in Sweden’s far north, global warming is happening three times faster than in the rest of the world. The southern summit, which was the tallest, has shrunk as the glacier at its top is melting. Photo: AFP

Part 2 of the IPCC report on climate impacts, seen exclusively by Agence France-Presse ahead of its February 2022 publication, reveals another yawning gap between the baby steps of COP26 and what is needed in the long term.

Helping vulnerable nations cope with the multiplier effect of global heating on extreme weather could soon require trillions of dollars per year, not the tens of billions put on the table at COP26, a draft version of the report makes clear.

The failure of rich nations to deliver $100 billion a year by 2020 to help developing countries makes it hard to imagine where these trillions will come from.

Glasgow marked the transition from fleshing out the rules for the 2015 Paris treaty to implementing its provisions.

But unlike the aftermath of other major COPs, the climate crisis will remain a permanent breaking story that is not going to recede into the background any time soon.

How that saga unfolds will depend a lot on the world’s four major emitters, collectively responsible for 60 per cent of global carbon pollution.

According to an annual assessment by an international group of scientists called the Global Carbon Project in November, worldwide carbon emissions are set to return to 36.4 billion tonnes, near their 2019 levels after dropping by 5.4 per cent last year amid lockdowns. Photo: Shutterstock

The United States and the European Union have pledged carbon neutrality by 2050 and recently set more ambitious emission-reduction targets for 2030. But they refused to set up a fund demanded by more than 130 developing countries to help pay for climate damage already incurred.

China and India – accounting for 38 per cent of global emissions in 2021, and rising – have resisted pressure to give up fossil fuels. Beijing has steadfastly refused to do what scientists say is doable and necessary to stay under 2 degrees Celsius: peak their emissions far earlier than 2030.

If climate politics remains stymied, however, global capital is already flowing into what some have called the most massive economic transformation in human history.

“If we only had to transform one sector, or move one country off fossil fuels, we would have done so long ago,” commented Christiana Figueres, who headed the UN climate convention when the Paris deal was struck.

“But all sectors of the global economy have to be decarbonised, and all countries must switch to clean technologies.”

Where some of that money might flow – and who might get left out – has also come into focus, with major investment deals announced for South Africa, and others in the pipeline for emerging economies such as Indonesia and Vietnam.

But there is little incentive for private capital to help the poorest and most vulnerable countries to cope with climate ravages and shore up their defences.

“We cannot just wait for open market incentives to have their way, we need to set prices on carbon globally, we need to set science-based targets that become climate laws,” said Johan Rockstrom, director of the Potsdam Institute for Climate Impact Research.