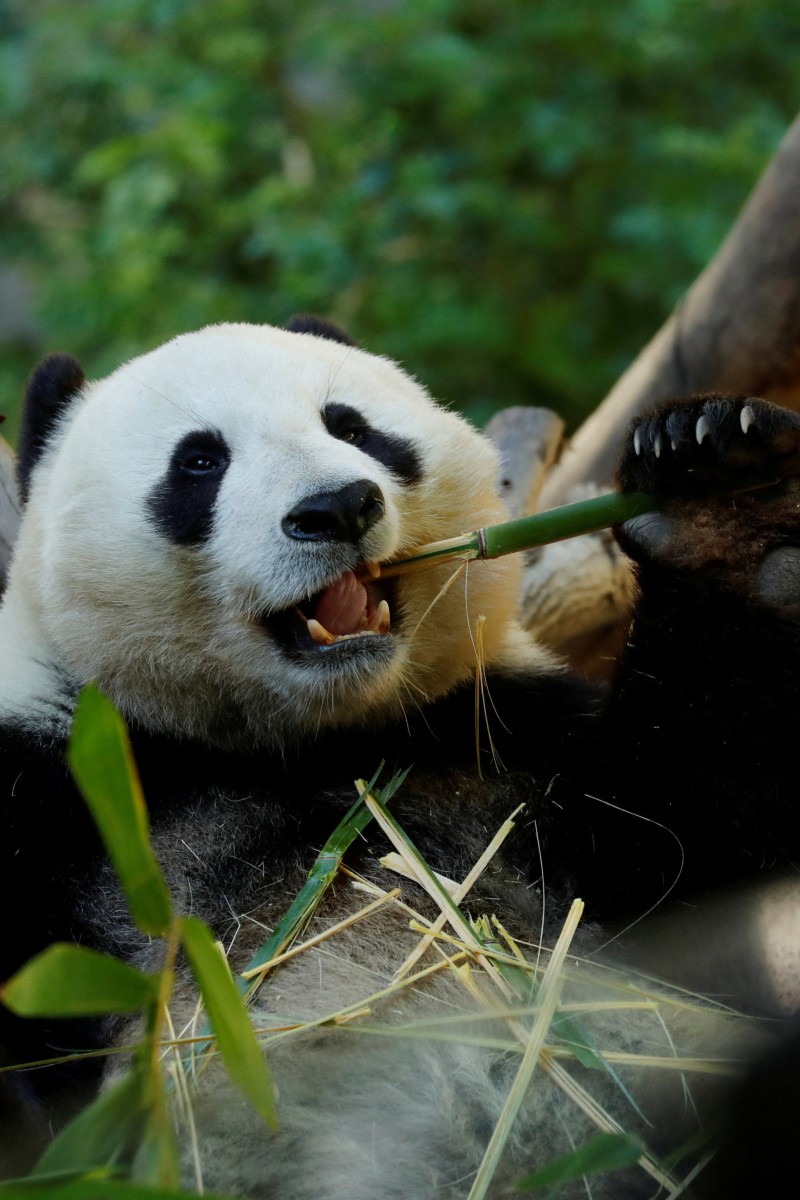 Scientists might have just solved the mystery of how the giant panda’s hand evolved to allow it to hold and crush bamboo stems. Photo: Reuters

Fossils unearthed in China are helping scientists get a better grasp on one of the marvels of evolution: the giant panda’s false thumb, which helps this veggie-loving bear munch the bamboo that makes up most of its diet.

Researchers said on Thursday they discovered near the city of Zhaotong in northern Yunnan Province fossils about 6 million years old of an extinct panda called Ailurarctos that bore the oldest-known evidence of this improvised extra digit – actually a greatly enlarged wrist bone called the radial sesamoid.

It closely resembled the false thumb of modern pandas, but is a bit longer and lacks the inward hook present on the end in the extant species that provides even greater ability to manipulate bamboo stalks, shoots and roots while eating.

The false thumb is an evolutionary adaptation to augment the existing five actual digits of the panda’s hand. A bear’s hand lacks the opposable thumb possessed by humans and various primates that enables the grasping and handling of objects using the fingers. The false thumb serves a similar function.

“It uses the false thumb as a very crude opposable thumb to grasp bamboos, sort of like our own thumbs except it is located at the wrist and is much shorter than human thumbs,” said Natural History Museum of Los Angeles County palaeontologist Wang Xiaoming, lead author of the research published in the journal Scientific Reports.

Ailurarctos was an evolutionary forerunner of the modern panda, smaller but with anatomical traits signalling a similar lifestyle including a bamboo diet. The modern panda’s false thumb has some advantages over the earlier version.

“The hooked false thumb offers a tighter grasp of the bamboo and, at the same time, its less-protruded tip – because of the bended hook – makes it easier for the panda to walk. Think of the false thumb as being stepped on every time the panda walks. And therefore, we think that is the reason that the false thumb in modern pandas has become shorter, not longer,” Wang said.

The panda’s tight grip on bamboo acts against the jerking action of the mouth to quickly break food into bite-size chunks, Wang added.

The researchers initially found an Ailurarctos arm bone in 2010, then discovered teeth and the false thumb in 2015, giving them a much better understanding of the animal. Until now, the oldest-known evidence of this thumblike structure dated to fossils from about 102,000-49,000 years ago in the same panda species alive today.

The false thumb lets pandas hold bamboo to eat but not rotate the food as a true thumb would allow.

“One of the most important features of human beings and their primate relatives is the evolution of a thumb that can be held against other fingers for precise grasping. The panda’s false thumb is far less effective than the human thumb, but it is enough to provide the giant panda with the grasping ability to eat bamboo,” said palaeontologist and study co-author Tao Deng of the Chinese Academy of Sciences in Beijing.

Pandas, one of the world’s eight bear species, once inhabited large swathes of Asia. They now live primarily in temperate forests in the mountains of southwestern China, with a wild population estimated under 2,000.

A panda’s diet is 99 per cent vegetarian, though they do sometimes eat small animals and carrion. Because of their inefficient digestive system, pandas consume large amounts to meet their nutritional needs – 12-38 kg (26-84 pounds) of bamboo while eating up to 14 hours a day.

The false thumb was not present in another closely related bear that lived about 9 million years ago, the researchers said.

“This is a great innovation – transformation of a minor bone into an element that is useful for a particular purpose,” said Harvard University paleobiologist and study co-author Lawrence Flynn.