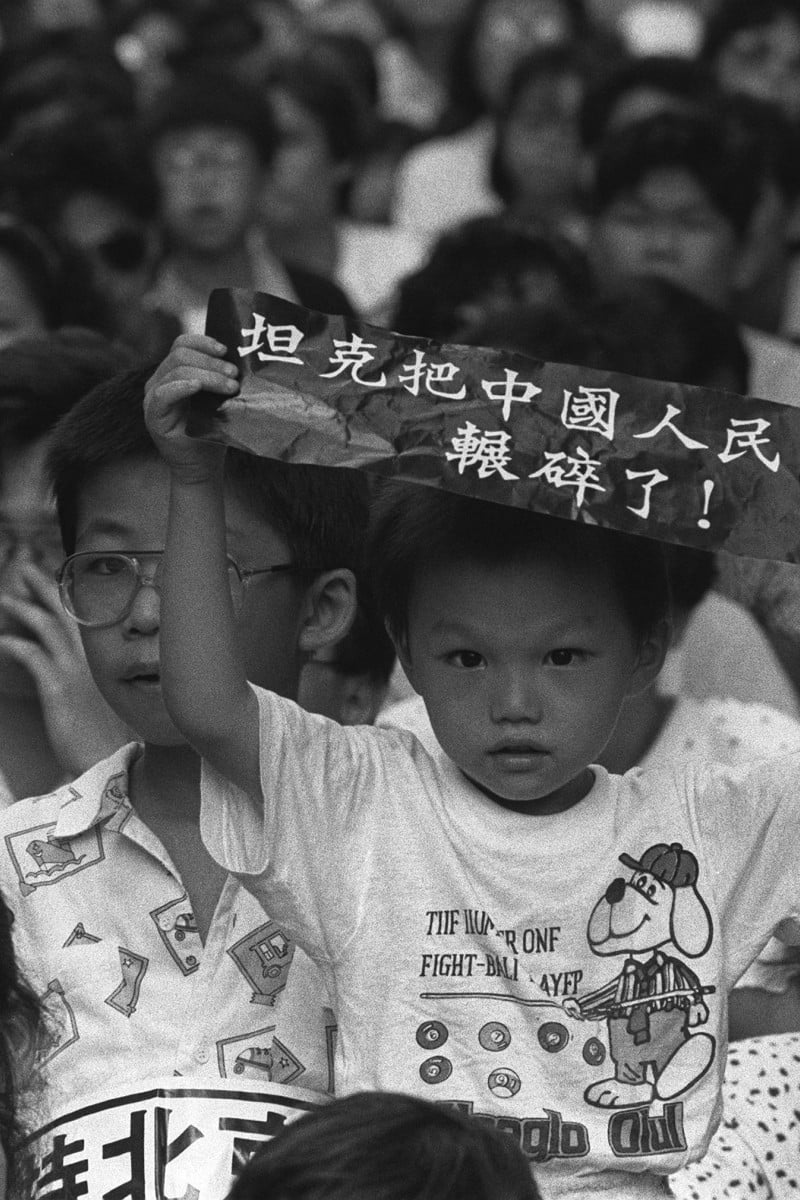 Voices from the city speak about what the events of June 4, 1989 mean to them 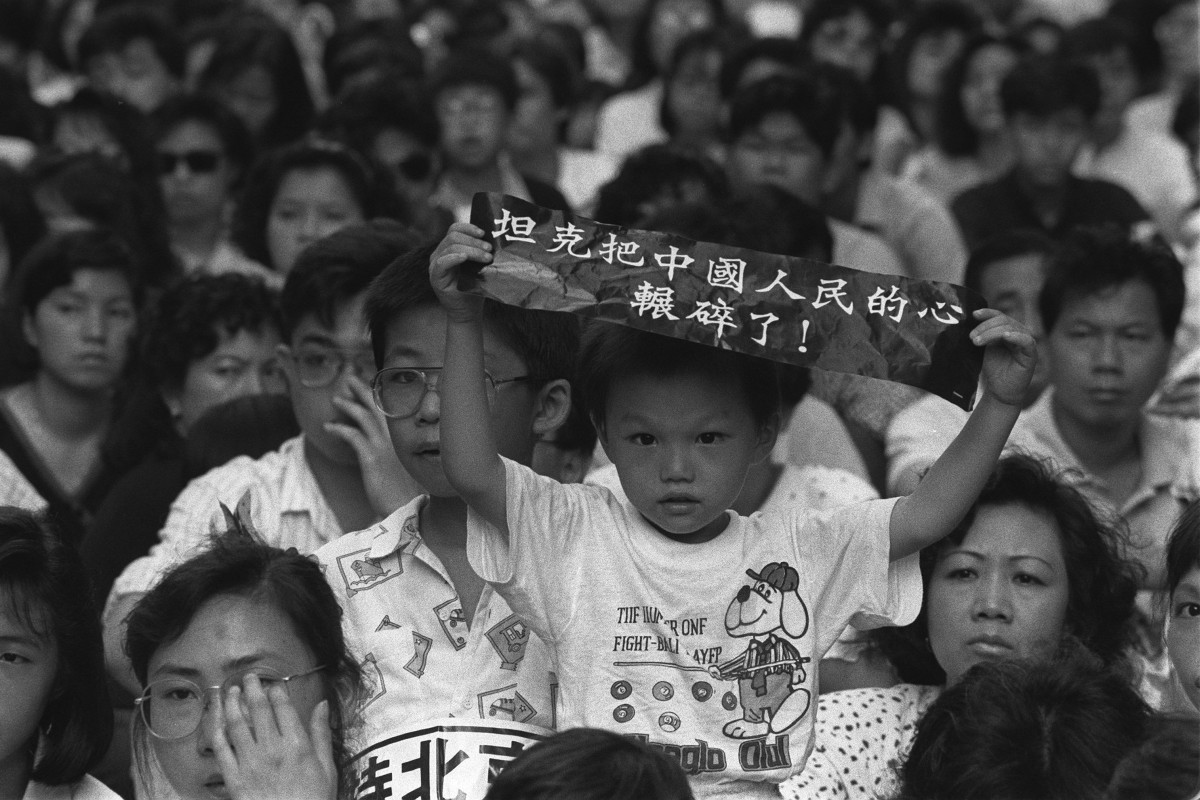 A child holds a placard that reads “tanks crush Chinese people's hearts” during a June 11, 1989, gathering in Hong Kong to remember those killed in the Tiananmen crackdown.

“[I learned about the June 4 incident] from watching the news on television when I was four. I was too young to understand the incident, but I will always remember seeing the crowds of people walking on the street. That was my first impression of what a ‘protest’ is.”

“I think people attend the candlelight vigil every year because they want to let the People’s Republic of China know that people still remember their wrongdoing. People won’t let this go. [The tradition should be preserved] because ‘those who cannot remember the past are condemned to repeat it’.”

“Rolling tanks and crushed bicycles. We deserve answers to June 4.”

“... One day, I saw a video on Facebook which talked about the whole incident. It was one of those videos that surfaces every year on June 4 to remind people of the crackdown. I was angry after watching the video, and I think it was also what led to my hatred towards the Communist Party of China... Later, I chose history and Chinese history as my high school electives. I really wanted to know what the CCP had done, so I could use what I learned to tell others why this government cannot be trusted.”

“I saw the event on TV and I was so shocked. I was like ‘this can’t be real, this can’t be real… how is that possible?’. The crackdown was horrible and cruel. Shortly after learning about it, I went to join the demonstration on the streets. I remember vividly that it was raining very heavily that day. Throughout the whole march, I just couldn’t believe something like that had actually happened. But then you saw it on TV: the shootings that began at night, and the Tank Man who stood there right in front of the tanks. All these images shook me to my core... I can also recall that my cousin was at Tiananmen Square at that time. He went all the way from Fujian to Beijing just to support the students there. When we saw the crackdown on TV, my parents immediately tried to contact his parents and urge him to leave as soon as possible.”

“The June 4 incident was an atrocity; the Communist Party of China used violent means against, and even murdered, students and workers who were fighting for democracy. Many were killed and injured. The party has also been continuously forcing people to forget about it... The candlelight vigil is the least we can do to commemorate the event ; it proves that memories can be passed on from generation to generation... It’s important to be there. As you remember the lives that were lost, and you look around and see many people thinking the same thoughts as you, you’ll feel encouraged, or at least less lonely…”

“A peaceful democracy movement led by university students desiring a better China. The People’s Republic of China responded by using assault rifles and tanks to massacre unarmed civilians, leading to hundreds, or even thousands, of deaths.”

“June 4 is important. I will never forget the tragic history of China, and the students’ courageous movement. I hope that democracy movements [in Hong Kong] will never come to an end.”

“It is an incredibly significant event which reflects the autocracy of the communist party. It also reminds me of the importance of the freedom and rights that we enjoy here in Hong Kong. I learned about the incident from TV documentaries, and from my history lessons at school.”

“Time flies. I cannot believe it was some 30 years ago now. It was a very heart-breaking incident which we will never forget. It is a great shame for the Chinese.”

“When the students in the mainland started the movement, I thought it was good and it even gave me some hope for China’s future. But when I heard about the crackdown, I felt helpless. At the same time, however, I wasn’t exactly surprised that the Communist Party would do something like that. Later, I kind of just accepted the reality.”

“The protestors were courageous and patriotic for standing up for what they believed in. The attack itself was plain barbaric and oppressive.”

“The purpose of the anniversary vigil is to show that June 4 is not a taboo subject in the city, and that people will not forget about what happened. The tradition should be kept alive to showcase freedom of speech in Hong Kong.”

“I was born in 1989. It’s impossible for me to separate myself from the incident... Ever since I was young, every June, my father would share some bits and pieces of what had happened in 1989 with me. He mentioned how anxious our entire family was at that time because of how the situation unfolded. He also talked about his disappointment towards the Chinese government after the crackdown. The candlelight vigil should continue. It not only recognises our identities as Hongkongers, but also allows the rest of the world to acknowledge Hong Kong as an international city, that we are in line with their values.”

“I don’t know why people go to the vigil every year. There is no use carrying on, the Chinese government won’t vindicate the protestors. Also, every new sovereign brings his own courtiers – it’s not the business of the current government.”

“At midnight on June 4, 1989, I was sitting in front of the TV with my parents and elder sister, watching the live coverage by Hong Kong journalists. I can still recall the chaotic scene shown on the TV although I was [only eight years old]: people were running and there were gunshot sounds. It fetl as if we were really there in Tiananmen Square. In my mind I was thinking ‘OH MY GOD.’”

“June 4 is one of the tragedies of Modern Chinese history that people should not forget, the same as the Cultural Revolution of 1966-76. [History] will repeat itself if the Communist Party doesn’t reflect and admit the mistakes they have made.”

The annual vigil in Hong Kong has been held every year since the crackdown.
Photo: AFP

“We should continue the candlelight vigil tradition as Hong Kong is the last city [in China] that can afford to do so. It is also important to attend the vigil because it is the last platform to voice our thoughts, which might be suppressed in the future.”

“It is likely that if you don’t say ‘no’ to what is wrong, people will assume that you’re fine with what has happened, or is happening. This is also why people must protest on June 9 and say no to the proposed extradition law.”

“Foreign countries took advantage of the undeveloped technology at the time, and presented riots as a massacre to induce public outrage.”

“I learned about the incident through a former reporter in the mainland. He told me assuredly that on that day in 1989, he received a call that urged the reporters at the scene to put down their cameras and just leave the area. Then, as they were leaving, all the lights at the square were turned off. Soon after that, they heard the sound of shootings...”

“Thirty years ago, I was watching closely as the events unfolded on TV. It was very shocking to everybody. Even though there weren’t a lot of announcements that called on people to protest [in Hong Kong], the next day, many people just took to the streets, and I was one of them. We were in distress and felt very upset for the students in Beijing. Thirty years later, however, I feel like my mindset has changed. The incident is admittedly a stain in China’s modern history; it’s a very sad event. But I think it can help people reflect on how to become better. I now believe that we can all learn something from it. Perhaps I also see things from new perspectives as I age; when I look back now, I feel like there is no absolute right or wrong.”

“Civilians died for daring to hope for a better country and better life in China. Part of me as a Chinese person died on June 4, 1989.”

“I learned about the incident from news, school and the Internet. I feel like people go to the vigil every year because they simply want the Chinese government to give a direct response to the incident. Another reason is that they want to pass on the torch so future generations can also know about what happened on June 4, 1989.”

“The June 4 incident played an indispensable role in shaping the economic and political ambience in Hong Kong today, even though it happened three decades ago.”

“If we want to pass on its underlying truth and implications to the next generation, it’s up to us, the parents, to interpret the incident to our children without bias.”

“Whether or not the June 4 vigil should continue depends why it’s held. For the purpose of commemoration, of course we should keep the tradition going…But at the same time, I don’t understand why we are not also commemorating the deaths of Hongkongers in tragedies such as the 2012 Lamma Island ferry collision or the 2010 Manila hostage crisis – aren’t those victims closer to our hearts?”

If we’re holding the vigil in the hope that the past will be vindicated, the lack of response from the People’s Republic of China in the past 30 years should be evidence that it’s not working. I believe that as long as the Communist Party of China is ruling, it is in vain to vindicate the 1989 protesters by holding the vigil once a year.”

“June 4 is China’s betrayal of the people who loved her the most; the country pulled the trigger on those so ready to take bullets for her. My body trembles whenever I ask myself ‘how could they have done it’, and my heart shatters at the mere thought of ‘what could have happened to China had [the martyrs] lived.’”

“Students gave up their lives to make their pleas, yet people with absolute power responded by having tanks run over their dreams for democracy.”

“I was at the protest at Central in 1989, with my parents. I remember being asked by a fellow protester whether I was Chinese or a Hongkonger. As a four-year-old, I didn’t know what that meant, nor how to answer. But it was a day on which people supported those who suffered in another corner of the world, without polarised political opinions of the blue or yellow ribbons. People were there simply because they believed in basic human rights, freedom of speech, and compassion, that life should be respected and no beings should be killed or tortured.”

“The incident, to myself, to Chinese people, to the government, is a historical burden. China has been developing rapidly over the past years. But this mistake impedes its growth, especially when people bring this up every year and talk about the wrongdoings of the regime.”

“I think it is futile to call for vindication at the annual vigil... Still, history should not be denied, and it is true that Hong Kong is the only place in China where people still enjoy the freedom and rights to hold an event in commemoration of those who died.”

“Whether you attend the candlelight vigil or not, the most important thing is to remember the reasons for the democracy movement in 1989, and what we can do now to change the present situation in Hong Kong.”

Remember the fallen: the 30th anniversary of the June 4 Tiananmen Square crackdown

Tiananmen Square crackdown and 1967 riots to be left out of HK secondary school Chinese history curriculum, starting in 2020