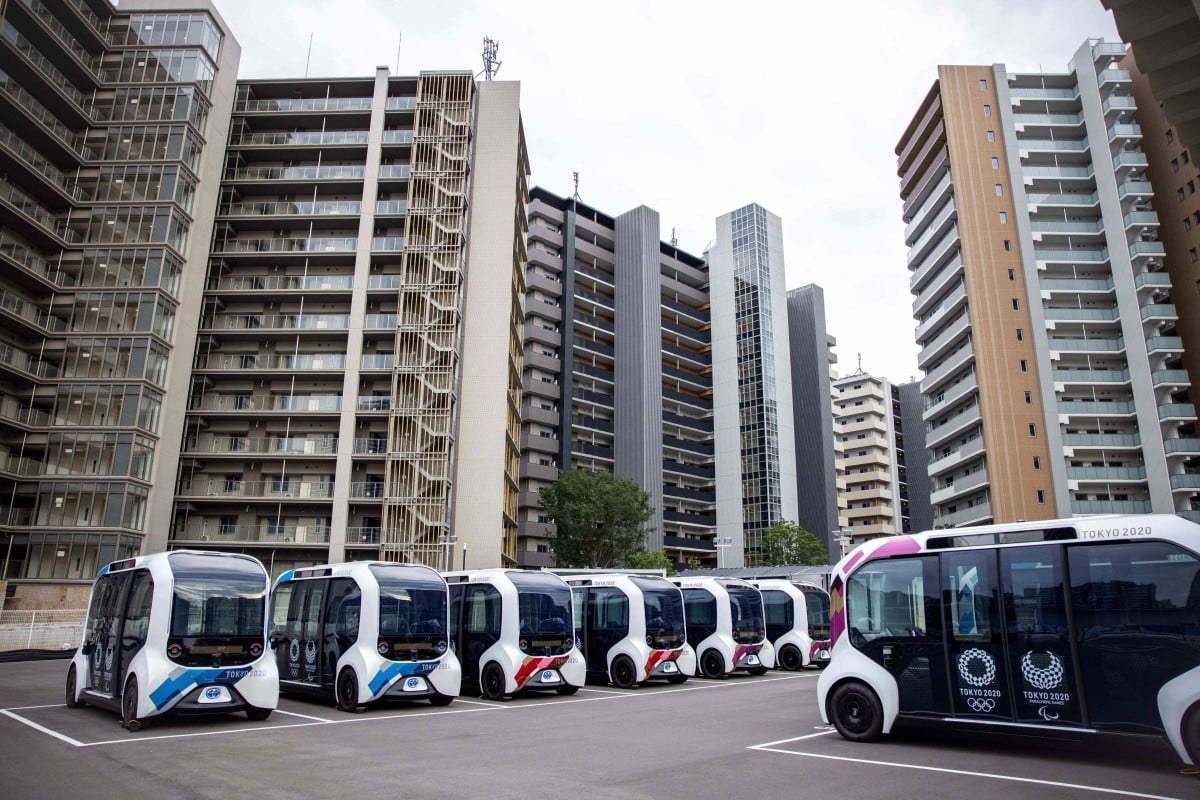 These autonomous electric vehicles will be used at the Tokyo 2020 Olympic and Paralympic Village, where athletes competing at the Games will stay, as strict coronavirus rules prevent them from leaving the compound except to train and compete. Photo: AFP

On Friday, the most troubled Olympics in modern history finally get under way in Tokyo. The Games are struggling to emerge from the clutches of Covid-19, after a one-year postponement following a build-up marred by scandal and controversy.

Friday’s opening ceremony will take place as daily cases have increased in the Japanese capital. Prime Minister Yoshihide Suga, who is determined to hold the Olympics, placed the city under a state of emergency on July 12. The emergency measures are to last until August 22, after the Olympics end on August 8.

But Tokyo hit another six-month high in new Covid-19 cases on Thursday, one day before the Olympics begin, as worries grow of a worsening of infections during the Games. Thursday’s 1,979 new cases are the highest since 2,044 were recorded on January 15.

Experts say virus infections among unvaccinated people younger than the age of 50 are rising sharply.

Japan’s vaccinations began late and slowly, but the pace picked up in May as the government pushed to accelerate the drive before the Olympics. However, the pace has since slowed due to a shortage of imported vaccines.

About 23 per cent of Japanese are fully vaccinated – way short of the level believed necessary to have any meaningful effect on reducing the risk in the general population.

Public opinion has consistently found a majority of Japanese are against the games, with opinion ranging from weary indifference to outright hostility.

The most recent poll from Japan’s Asahi newspaper found 55 per cent of respondents were against holding them this summer.

“I’m losing interest altogether. I feel like I can’t really wholeheartedly welcome the Olympics, and I just don’t really feel any joy in it,” Tokyo resident Seira Onuma said.

“I’m even not sure if I will watch the Games on TV.”

Should the Tokyo Olympics go ahead?

Fears that the global gathering of 11,000 athletes could trigger a colossal superspreader event have prompted organisers to clamp the Games in a biosecure straitjacket.

Pandemic restrictions mean that for the first time in Olympic history, no domestic or overseas spectators will be allowed to attend the Games .

Sightseeing trips are forbidden, meaning that for the most part, athletes will be prevented from straying outside their accommodation or competition venues.

Friday’s opening ceremony – traditionally a highlight of any Summer Games, with the parade of nations and lighting of the Olympic flame before several thousand athletes – will be drastically pared back.

Fewer than 1,000 dignitaries and officials will be present at the 68,000-seat Olympic Stadium for the extravaganza, which begins at 8pm local time (7pm Hong Kong time).

Japan’s Emperor Naruhito will be chief among the VIPs, along with a smattering of world leaders and senior figures including US First Lady Jill Biden and French President Emmanuel Macron, whose country will host the 2024 Olympics in Paris.

But in a sign of the antipathy towards the Olympics, several top sponsors including Toyota, Panasonic, Fujitsu and NEC will not be sending executives to the ceremony.

“It is turning into an Olympics that cannot get understanding (from the public),” Toyota’s operating officer Jun Nagata said.

Japan’s emperor meanwhile acknowledged the difficulties of holding the Games in a pandemic, describing it as a “far from easy task” in remarks to International Olympic Committee (IOC) President Thomas Bach.

IOC chief Bach, who for months has batted away calls to postpone or cancel the Games, insists the Olympics can be held safely.

“Over the past 15 months, we had to take many decisions on very uncertain grounds,” Bach said this week. “We had doubts every day. There were sleepless nights.

“We can finally see at the end of the dark tunnel. Cancellation was never an option for us. The IOC never abandons the athletes ... we did it for the athletes.”

Financial reasons for the Games to go on

There are also hefty financial incentives in play. Insiders estimate the IOC would have been on the hook for around US$1.5 billion in lost broadcasting revenues if the Games had been cancelled.

Olympic organisers meanwhile will be forgiven for breathing a sigh of relief as attention finally shifts to sporting action after a turbulent road to the Games.

The build-up has been dogged by scandals ranging from corruption during the bidding process to plagiarism allegations over the design of the Tokyo 2020 logo.

The controversies even rumbled up to the eve of the Games, when on Thursday the opening ceremony’s director was sacked for making a joke referencing the Holocaust in a 1998 video.