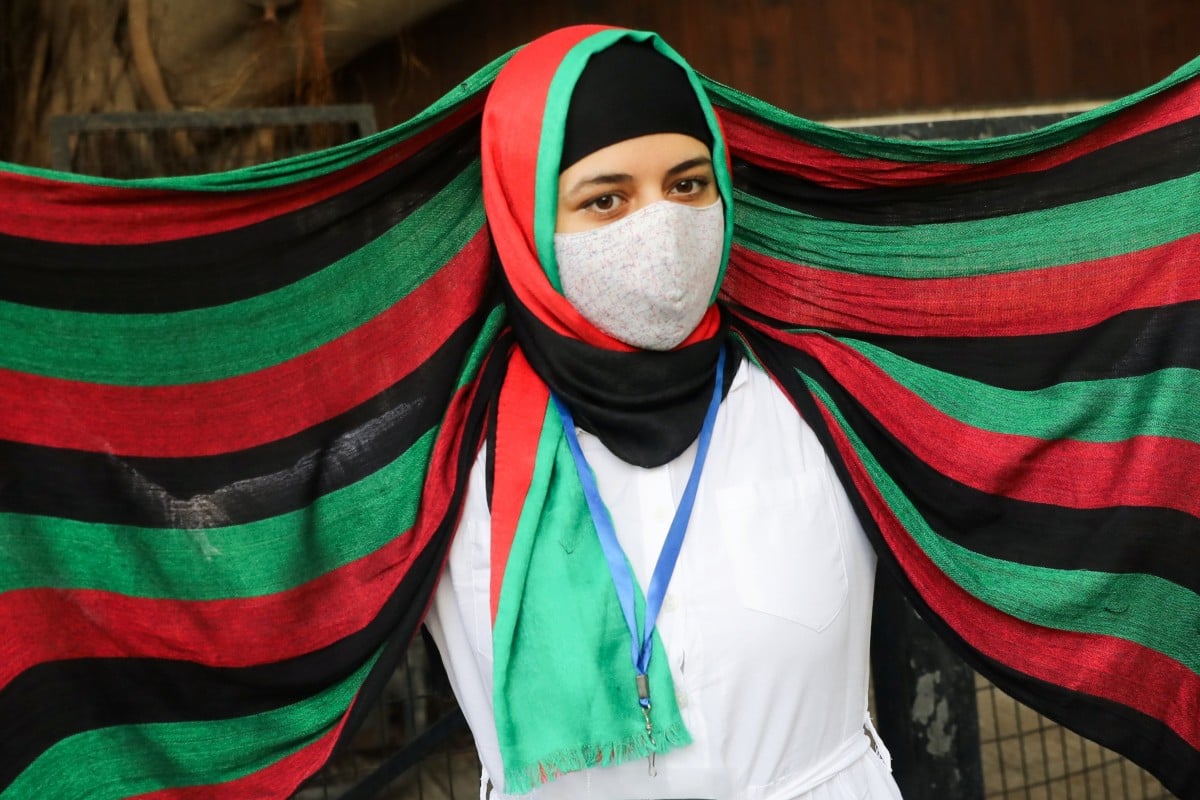 An Afghan woman wears a scarf with the colours of the national flag of Afghanistan during a protest outside the United Nations High Commissioner for Refugees (UNHCR) office in New Delhi, India, urging the international community to help Afghan refugees. Photo: Reuters

Afghanistan’s ethnic diversity has been at the centre of politics and conflict in the country for more than a century, and these divides are expected to play a role in the Taliban’s formation of a new government.

No single ethnic group has a decisive majority among Afghanistan’s 40 million people, and the divides have been a constant challenge to political stability.

Afghanistan was the world’s fourth most dangerous country in last year’s Peoples under Threat Index, compiled by Minority Rights Group International, which said all ethnic groups faced the risk of systematic violent repression and mass killings.

Here is a brief overview of the major ethnic groups in Afghanistan.

Afghans walk along fences as they arrive in Pakistan through the Pakistan-Afghanistan border crossing point in Chaman on August 23, 2021, following the Taliban’s military takeover of Afghanistan. Photo: AFP

The Pashtuns are Afghanistan’s biggest ethnic group, making up more than 42 per cent of the population.

The group -which is predominantly Sunni Muslim and speaks the Pashto language - has dominated Afghan politics since the 18th century.

Many Pashtun leaders over the years have stressed a “right to rule” Afghanistan, which has angered other ethnic groups.

The Taliban, in control of Afghanistan for a second time after their 1996-2001 regime, are a Pashtun-dominated group.

Even the two presidents under the previous US-backed governments - Hamid Karzai and Ashraf Ghani - were Pashtuns.

Traditionally based in the south and east of the country, the dominant position of the Pashtuns has often caused resentment among other groups, especially because of political, economic and cultural marginalisation.

Afghans residing in India take part in a demonstration outside the UN Refugee Agency office in New Delhi to protest against the Taliban’s military takeover of Afghanistan. Photo: AFP

The Tajiks are the second-biggest ethnic group, making up more than a quarter of the Afghan population.

The main language among Tajiks is a dialect of Farsi called Dari, also the lingua franca (common language) of Afghanistan.

The group is mainly distributed in the north and west of the country, with strongholds in the Panjshir Valley, the western city of Herat and some northern provinces.

A brief guide to the crisis in Yemen

The Panjshir Valley is famed for resisting occupation not only by the Soviet military in the 1980s but also by the first Taliban regime.

While not politically dominant, a number of prominent Tajik leaders have emerged in recent decades.

The revered mujahideen (guerilla fighters) leader Ahmad Shah Massoud - “The Lion of Panjshir” - who fought the Red Army (the Soviet Army) and the Taliban is at the top of that list among Afghans.

Burhanuddin Rabbani, a Tajik from a province in the north, served as Afghan president from 1992 to 1996 before Kabul fell to the Taliban.

Abdullah Abdullah, former chief executive and the main peace negotiator for the previous Afghan regime, is of mixed Pashtun-Tajik ethnicity but is widely considered the latter.

A group of Afghan nationals residing in South Korea, whose family members have worked with Koreans in their home country, call for the South Korean government to rescue them during a rally outside the Foreign Ministry in Seoul, South Korea. Photo: AP

The Hazara, believed to have origins in Central Asian and Turkic peoples, are around 10 per cent of the population and are mainly based in central Afghanistan.

They speak a Dari dialect and are predominantly Shia Muslim.

The group has faced violent oppression and discrimination in Afghanistan over both religion and ethnicity for more than a century.

A statue of Abdul Ali Mazari, who was a leader of the Hazara minority, is seen in Bamiyan valley, Afghanistan in 2011. Images circulated on social media on 18 August 2021 suggest that the statue was blown up, according to reporters citing local civilians. Mazari was killed by Taliban militants in 1995. Photo: EPA-EFE

They have also suffered massacres across various Afghan governments in recent decades, but especially under the Taliban - hardline Sunni Muslims who have usually labelled Shias heretics.

Other militants active in Afghanistan, such as the Islamic State groups, have also targeted the Hazara with deadly bomb attacks, not even sparing their schools and hospitals.

11 people die of hunger every minute

Afghan Uzbeks are also around 10 per cent of the population, mainly based in the north of the country, close to the border with Uzbekistan.

A Turkic people, they are mainly Sunni Muslims.

The most famous, and notorious, Afghan Uzbek is the warlord Abdul Rashid Dostum, who fought with the Soviets against the mujahideen before changing sides and effectively setting up his own stronghold centred on the northern city of Mazar-i-Sharif.

On August 14, Abdul Rashid Dostum, an Afghan Uzbek army commander, former northern warlord and vice president, crossed into Uzbekistan with a group of followers, which marked his surrender in the fight for control of the northern districts. His current whereabouts are unclear. Photo: AP

He was a leading figure in the Northern Alliance that helped end Taliban rule after the US invasion of 2001, and later joined the Ghani administration as a first vice-president.

He fled to Uzbekistan when Mazar-i-Sharif fell to the Taliban this month.

The Afghan constitution of 2004 officially recognised more than a dozen ethnicities. In addition to the four biggest groups, the nomadic Aimaq, the Turkmen and the Baloch were also listed.

Also included were the Nuristani people in the northeast of Afghanistan, who were forcibly converted to Islam in the 19th century.