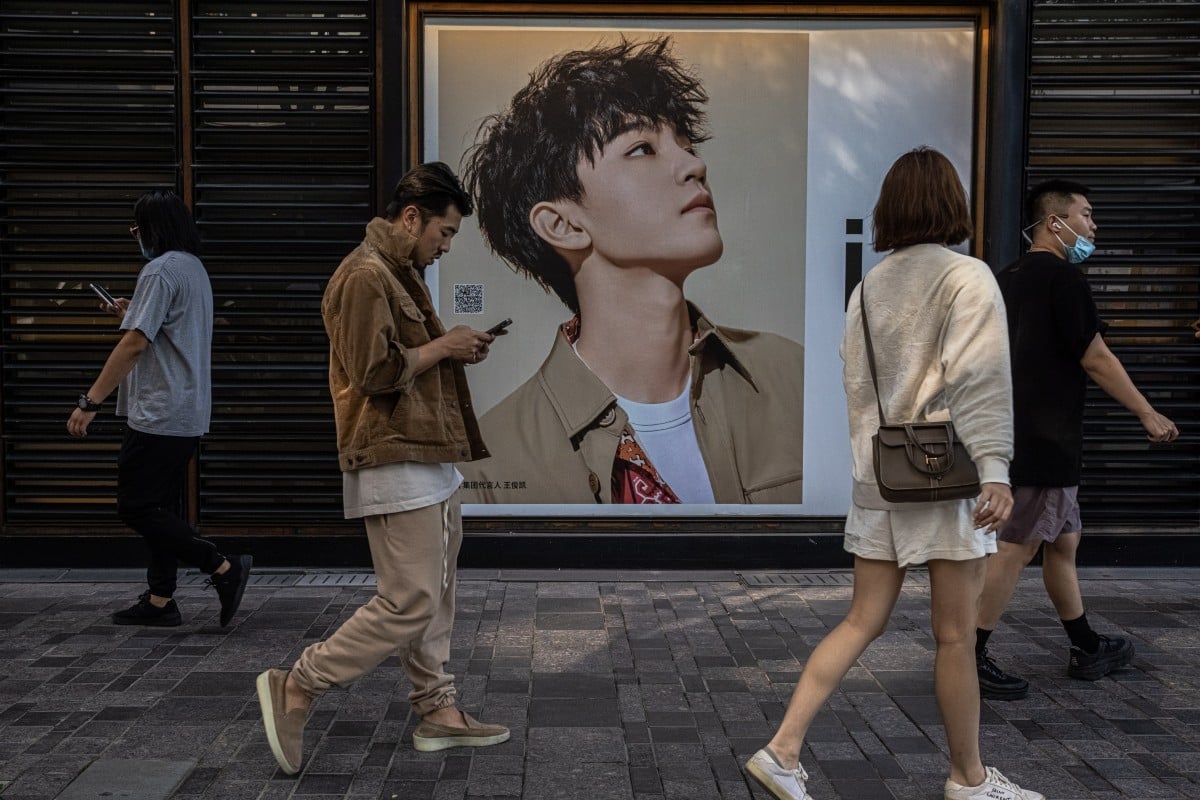 Television shows will no longer be allowed to encourage fans to shop or buy membership to vote for their idols. Photo: EPA-EFE

The crackdown began in June when the Cyberspace Administration of China posted a statement on its official website. It said that fans had been fighting and spreading rumours online, which “disrupted the pure and healthy online ecosystem”.

It continued to explain that fan culture had “harmed the mental and physical health of young people”.

On September 2, television companies and internet platforms were told to “strictly control the selection of programme actors and guests, by making sure they have a correct political stance, good conduct, high artistic level and strong social credit,” according to a statement from the National Radio and Television Administration (NRTA).

What is the reasoning behind China’s crackdown on ‘toxic’ fandom culture?

The NRTA also released the following eight-point plan, which calls for “further regulation of arts and entertainment shows and related personnel”:

News: China bans men it sees as not masculine enough from television

China’s top media regulator has announced a boycott of what it calls “sissy idols”, among other guidelines, during an ongoing “clean-up” of the entertainment industry.

Broadcasters must “resolutely put an end to sissy men and other abnormal aesthetics,” the National Radio and Television Administration said early this month. It used an insulting slang term for effeminate men – niang pao, translated literally as “girlie guns”.

This reflects concern that Chinese pop stars – influenced by the sleek, fashionable look of some South Korean and Japanese singers and actors – are failing to encourage China’s young men to be masculine enough.

The new guidelines come as authorities have been increasingly critical of the trend some refer to as “sissy men”. It includes pop idols that wear make-up or who do not conform to macho male stereotypes prevalent in traditional Chinese culture. Some in China also see the popularity of such idols – often referred to as “little fresh meat” – as a threat to traditional social values.

Authorities are concerned that Chinese pop stars are failing to encourage young men to be masculine enough. Photo: Getty Images

Under the section “boycotting being overly entertaining” of the eight-point plan, the notice states there needs to be more emphasis on “traditional Chinese culture, revolution culture, socialist culture”. It also says that a “correct beauty standard”, including boycotting “sissy idols” and vulgar internet celebrities, will be established.

While the document was hailed by some producers and livestreamers, others found some of the plan’s phrasing problematic.

“A person’s gender expression has no connection to their talent, character, and whether or not they are patriotic or contribute to society,” said Ah Qiang, a Guangzhou-based NGO worker who has been working with sexual minority groups for many years.

“This is discrimination against those with neutral or a more feminine gender expression. It’s a conflict between a backwards beauty standard and [individualism] in modern society.” Staff writer and Associated Press

Use this picture to answer the question prompt below

Online celebrity fan clubs have become a widespread phenomenon in China. According to a report published by iResearch Consulting Group in 2020, the market value related to the fan economy in China was estimated to be over 4 trillion yuan (HK$4.81 trillion) in 2019, and was projected to surpass 6 trillion yuan in 2023.

To further weed out what it characterised as “toxic fan culture”, the Cyberspace Administration of China announced a 10-point regulation late last month.

The Chinese government is reining in what they have deemed as “toxic” fan culture. Photo: CGTN

Under the new regulations, all celebrity ranking lists will be removed. Rankings of music, films and other works by celebrities can be kept if they do not name stars directly.

Celebrity agencies will face tighter regulations in regards to content release, commercial promotion and fan management. Agencies have been ordered to take a stronger role in monitoring fan groups to deal with accounts that start fights between fans.

Teenagers are banned from joining fan clubs. They are also restricted from voting online for idols and spending money on idol-boosting activities, which include buying products for which an idol is a spokesperson. Authorities said the move was meant to keep fan culture from disrupting their studies and daily life.

On August 6, Weibo announced the removal of the “Star Power Ranking List” – a virtual platform where fans shower money and time to show their love and support for stars. It said the list had been removed “to ensure the orderly development of the community and channel the rational chasing of stars by fans”.

Likewise, Douyin, TikTok’s sister app in China, and Kuaishou, a short video-sharing app backed by Tencent, have removed celebrity rankings from their platforms.

In late August, Gong Yu, director of the China Television Association and founder and CEO of streaming giant iQiyi, also announced it had cancelled its idol talent show and any online voting features for the next few years. Staff writers

Cyberspace Administration of China: China’s internet regulator and censor body. It is also involved in forming and implementing policies related to online censorship and cybersecurity in the country.

Fandom: A highly organised group of fans, who are willing to devote time and money to increase their idol’s popularity. Within fandoms, administrators organise groups of fans on different media platforms, such as Tencent and Weibo. These managers assign different tasks to fans every day to boost the celebrity’s ratings or exposure. Tasks can include sharing, liking and commenting on social media posts. Some extremely devoted fans are even known to spam social media, spread fake news to hijack public opinion, and use bots to increase traffic data related to their idols.

Idol selection show: A form of survival reality television shows. “Trainees” – aspiring idols – participate in a series of challenges to compete for a chance to debut. Every week, viewers vote for their favourite contestant. Those who do not receive enough votes are eliminated. At the end of the competition, the trainees who come out on top usually form an idol group.

National Radio and Television Administration: An agency under the State Council of the People’s Republic of China. It is in charge of state-owned companies such as China Central Television, China National Radio, China Radio International, as well as other film and television studios.