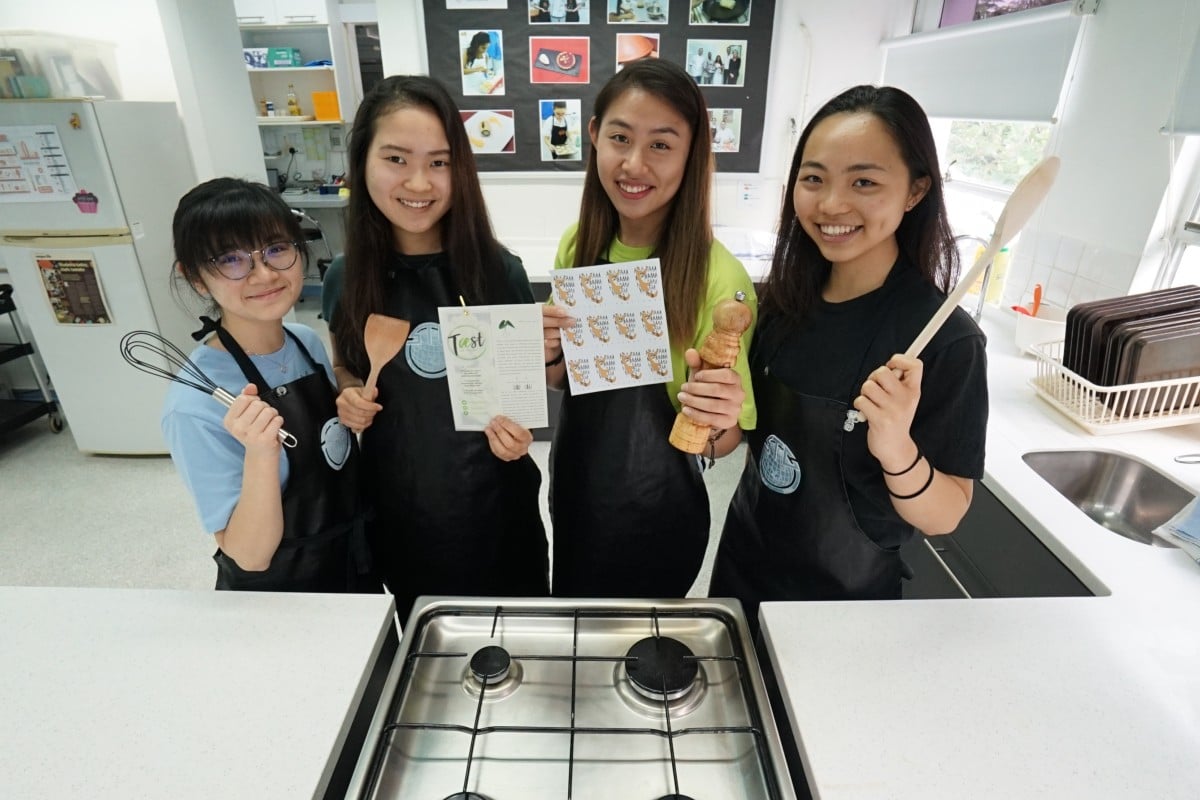 Taest is a project set up and run by 10 students from Sha Tin College. Its goal is to create a cookbook that promotes food sustainability and reduces food waste.

“Food is a big part of Hong Kong culture, but we seem to produce a lot of food waste. We are not very good at protecting the resources that we have in Hong Kong. We also import a lot of food from elsewhere,” explained Martha Chow, 17, one of the project’s two editors-in-chief. “That has a really big ecological impact and we want to help reduce it.”

Why Taest was set up

Many of the Taest team are avid foodies, but were worried by how much food waste was going on around them, particularly in the school cafeteria.

“Students don’t like to eat school food – they think it tastes bad, and the options are quite limited,” said Kaylin Hsieh, 17, who is responsible for the project’s publicity and promotion.

“Many students in our school are throwing away food because they don’t like it. Maybe encouraging them to cook and make something they enjoy eating would be a way to solve this issue,” Martha added.

Hasselback chicken made from a recipe in the Taest cookbook.
Photo courtesy of Taest.

They also thought the cookbook project was a good way to combine their love of food and their concern for the environment.

“It was something we thought of ourselves. Martha and I both like cooking and it’s something that we do,” explained co-editor-in-chief, Cheng Man-lam, 17.

“We’ve also taken part in the school’s Masterchef competition a few times. That’s why we decided to take this opportunity to take our hobby and make it into a cookbook,” she added.

Most Hongkongers support bringing your own box for takeaway food

How the cookbook promotes food sustainability

The recipes in the cookbook feature interesting ideas that make you think about where your food comes from, and how you can reduce food waste.

Many of the recipes were written by 12 young chefs from the school.

“We encourage our recipe writers to think about the ingredients which they choose and how they use those ingredients,” said Man-lam. “We want them to think of innovative ways to use ingredients.

Blueberry oatmeal made from a recipe in the Taest cookbook.
Photo courtesy of Taest.

“We hope that when people read our cookbook, they’ll use our recipes, or adapt them and start including sustainable cooking in their lives.” One example is the recipe for ridge gourd coulis with croutons, which uses the skin of the fruit rather than peeling and throwing it away.

“It’s quite an interesting concept, because usually when we cook, we produce a lot of waste as we only use certain parts of the ingredient rather than the entire ingredient,” Martha explained.

The Taest cookbook doesn’t just contain recipes, it also provides information on how to choose the ingredients that will have a smaller impact on the environment than others. It also suggests local food suppliers, and explains where to get locally-sourced food in Hong Kong.

Some of the challenges of organising the project

The hardest part for the project’s publicity team was figuring out how to promote their book online.

“We had to put everything together ourselves, and confirm what to add to the website. We have a big team so we also had to work together, and choose what we put in,” said Rachel Tong, 17, who works with Kaylin on the book’s publicity and promotion.

“We have to think about the reader’s first impressions – like how they will react and if they will understand what we are trying to say,” Kaylin asked.

Although working as a team was challenging, Rachel said she enjoyed it. “Everyone has different ideas and pulling them together to make our ‘baby’ is a really fun and cool process,” she said.

When the cookbook is going to come out

The team has been working on the project in between school work, since October. They want to have the book ready for launch this December.

Kaylin said she was both nervous and excited.

“We have put so much time and effort in working on it. We really don’t know what to expect from the audience. We can only predict but we don’t know what’s going to happen, and I think that is the most exciting part,” she said.