“Dinosaurs could not withstand massive changes to the climate”: climate activists glue themselves to dinosaur exhibit in Berlin 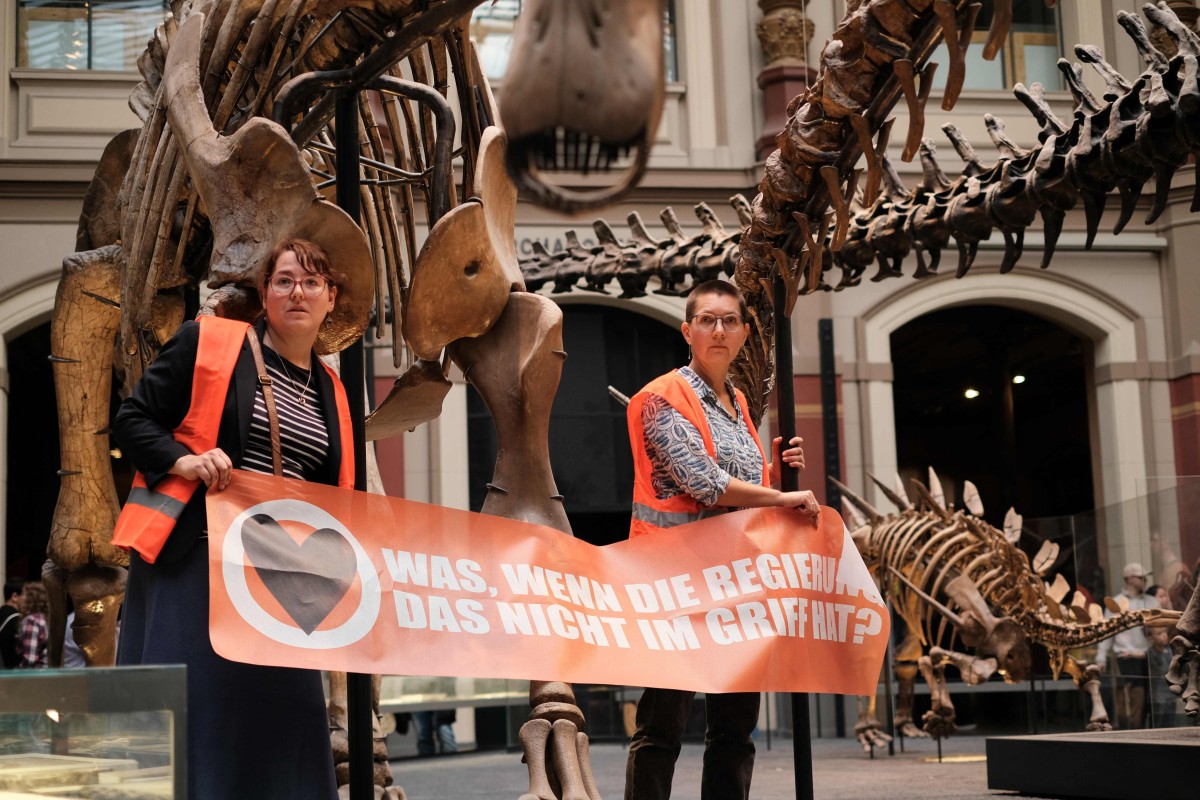 Two environmental activists holding a banner reading “What if the government does not have it under control” in Berlin’s Natural History Museum to protest the German government’s climate policies. Photo: AFP

Two environmental activists glued themselves to an exhibition of a dinosaur skeleton at Berlin’s Natural History Museum on Sunday to protest the German government’s climate policies.

It was the latest such stunt by climate campaigners at a museum, after famous artworks were targeted in different ways across Europe.

In Berlin, two women wearing orange vests stuck themselves to metal poles supporting a dinosaur skeleton that was over 60 million years old, holding a banner that read: “What if the government doesn’t have it under control?”

One of the women, Caris Connell, said she was scared of “forest fires, water shortages, famines, and war. “Dinosaurs died out, because they could not withstand massive changes to the climate. That is also threatening us,” added the 34-year-old.

The other activist, Solvig Schinkoethe, said as a mother of four, she feared the consequences of climate change. “Peaceful resistance is the way we have chosen to protect our children from the deadly ignorance of governments,” said the 42-year-old.

They called on the government in Berlin to take quick steps to cut emissions, such as by setting a speed limit on motorways and introducing more affordable public transport.

The museum said police brought the incident to an end in under an hour. There was property damage, and criminal charges have been filed, it said in a statement.

The activists were from the group Last Generation, which earlier this month splashed mashed potatoes on Claude Monet’s $111-million Les Meules (Haystacks) at the Museum Barberini in Potsdam, Germany.

In recent weeks, climate activists have also glued themselves to Johannes Vermeer’s Girl with a Pearl Earring at a Dutch museum, and thrown soup at Vincent van Gogh’s Sunflowers at the National Gallery in London.