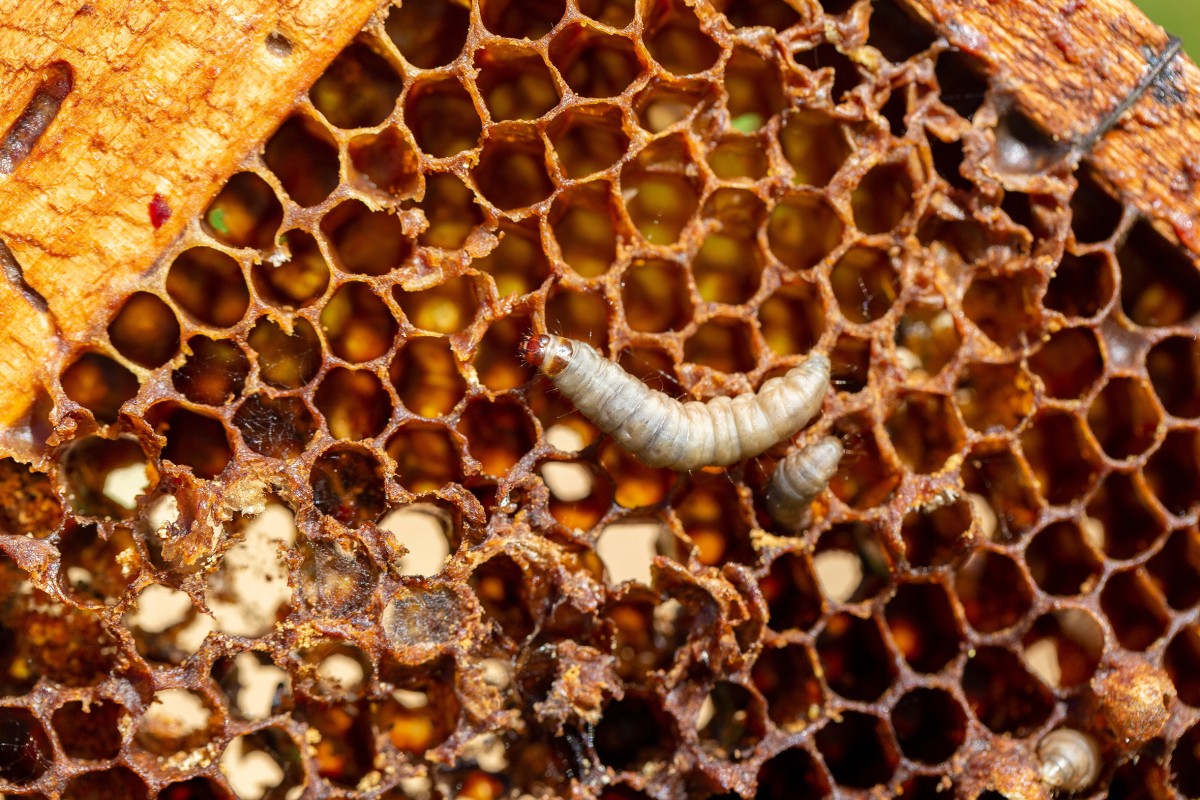 Honeycombs infested with wax worms were what led a scientist to discover the insect’s plastic-degrading abilities. Photo: Shutterstock

Enzymes found in the saliva of wax worms can degrade one of the most common forms of plastic waste. This is based on research published in October that could create new ways to deal with plastic pollution.

Each year, humans make some 400 million tonnes of plastic waste. Around a third of this plastic waste is polyethylene. This is a tough plastic because of its structure, which usually requires heating or radiation before it starts to break down.

Several studies have shown that microorganisms can release enzymes that start the degradation process on polyethylene, but until now, the process has taken months each time. But those contained in the saliva of the wax worm moth – Galleria mellonella – can act in only a few hours, the research showed (see graphic).

How scientists discovered the power of saliva

Researcher Federica Bertocchini is an avid beekeeper. She first stumbled across the small caterpillar’s unusual powers when storing honeycombs a few years ago.

“At the end of the season, usually beekeepers put some empty beehives in a storage room, to put them back in the field in the spring,” she explained.

“One year I did that, and I found my stored honeycombs plagued with wax worms. In fact, that is their habitat.”

Bertocchini cleaned the honeycombs and put the worms in a plastic bag. When she returned a short time later she found the bag “riddled with holes”.

“That raised the question: is it the result of munching, or is there a chemical modification? We checked that, doing proper lab experiments, and we found that the polyethylene had been oxidised,” she said.

Bertocchini, from Madrid’s Margarita Salas Centre for Biological Studies (CIB), and her colleagues analysed proteins in the wax worm saliva. They identified two enzymes that could break down polyethylene into small polymers in only a few hours at room temperature.

In the journal Nature Communications, they explained how another worm’s saliva created no degradation compared with the wax worm.

Bertocchini said her team was still trying to figure out precisely how the worms degraded the plastic. The study authors stressed that much more research was needed before the findings could be meaningfully used. But there were many possible applications.

“We can imagine a scenario where these enzymes are used in an aqueous solution, and litres of this solution are poured over piles of collected plastic in a waste management facility,” said Bertocchini.

“We can also imagine small amounts that can reach more remote locations, like villages or small islands, where waste facilities are not available.”

She said that in the future, the solution could be used at home for families to degrade their own plastic waste.

Each year, polyethylene makes up around a third of plastic waste that humans create. Photo: Shutterstock

Which other microorganisms can break down plastic?

Scientists have identified several types of bacteria that can “eat” plastic.

One of such is Ideonella sakaiensis. In 2016, a group of Japanese scientists discovered that it could break down a type of clear plastic called polyethylene terephthalate (PET) – this is what bottles are commonly made from.

The organism produced two enzymes that allowed it to feed on PET. However, these enzymes would not be fast enough to address the tens of millions of plastic waste that is thrown away every year.

Since then, scientists around the world have been finding and developing different organisms that can break down plastic, but at a much faster rate.