From journalists' perspectives: Memories of the 2011 Japan tsunami and earthquake 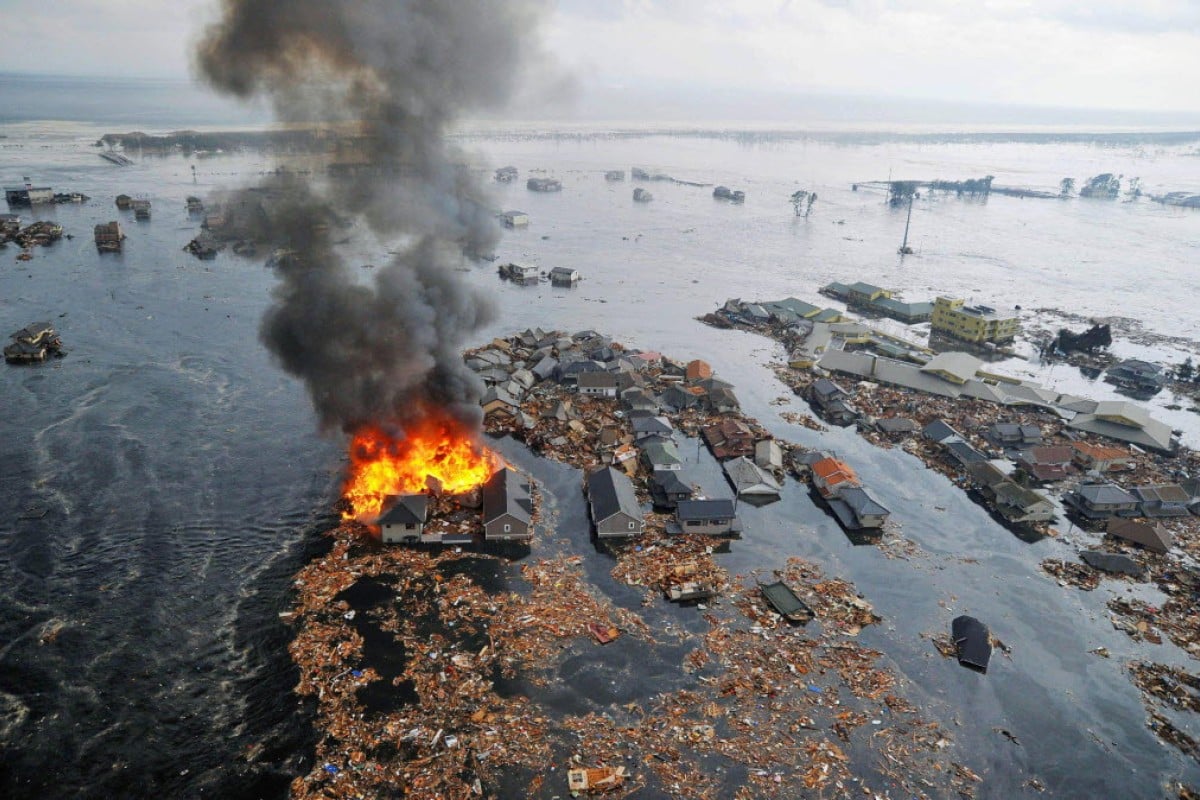 Houses in Natori, Miyagi Prefecture, northeastern Japan, that were swallowed by the tsunami on March 11, 2011.

As Japan’s “triple disaster” - quake, tsunami and nuclear crisis - unfolded after March 11, 2011, Associated Press journalists fanned out across the northern region of Tohoku to report and record what had happened in pictures, stories and video footage.   Here, some of them recall memories and scenes that haunt them to this day:

I was at my desk watching the prime minister getting questioned in Parliament on TV when an forbidding message from Japan’s disaster early-warning system flashed on the screen: A major earthquake was about to strike. Somebody in the newsroom shouted and everyone froze. About 10 seconds later, the building started shaking violently, making the blinds slam against the windows of our 7th-floor office. I could hear the building creak and groan as it rocked back and forth. Some staffers dove under their desks.

In a chat window to editors in Bangkok, I quickly messaged: “HUGE QUAKE.” I started typing an alert to send on the wire, but it was hard because my keyboard was moving so much. The shaking went on and on - definitely more than a minute, perhaps two. It felt like forever. Glancing up at the ceiling, I wondered briefly if I would die. My thoughts turned to my wife and boys. "Lord, help!" I prayed. Colleague Miles Edelsten, video camera on his shoulder, came to the window behind me, filming people pouring out of the nearby building onto a plaza below.

Finally, the shaking subsided - and everyone in the bureau jumped into action.

My strongest memory was a scene I photographed in Onagawa: Cars on top of a three-story apartment building. It looked like their escape had been cut off and that they had been lifted up by the tsunami more than 20 meters (65 feet) above the ground. I was struck by the enormous power and ferociousness of nature. It looked like a scene from hell as I imagined that there were probably many dead bodies in the debris all around me.

Dead fish on a hill

I still think about the tsunami some nights when I’m falling asleep. I remember standing on a hilltop looking across the flattened town of Minami-Sanriku as a line of green army trucks moved through the destruction. The hill was home to one of the town’s tsunami evacuation centers, and several cars parked there had been lifted up and pushed together in the corner of a lot. It was hard to imagine the water had reached this height. The first story of a villa perched on the hilltop, facing the ocean, had been taken out. Dead fish were scattered in a pile of broken wooden boards nearby.

Down by the bay, four-story buildings had been reduced to ghostly steel-and-concrete frames covered in debris and sea nets. The most chilling thing to me was realizing that Minami-Sanriku had long feared such a disaster, and tried to prepare. By the water’s edge, where the concrete slabs of a once-mighty seawall crumpled into the sea, tsunami evacuation routes painted into the broken road were still visible. Green arrows had pointed the way to safety - the ravaged hilltop - with the blue figure of a pedestrian running from curling blue waves.

The first two days after the quake struck, I was on a helicopter taking aerial shots. I saw huge columns of black smoke from a flattened town. A large cargo ship was on top of a building. There was no sign of life at all. I did not want to think about thousands of people who were there when the colossal tsunami hit. I just tried to focus on what I needed to do.

But an encounter I had later with an old lady who was looking for her nephew sticks in my mind. It was a cold day and the sky was covered with dark clouds. The tsunami wiped out much of her city of Otsuchi. As she carefully walked in the mud in her rubber boots, she struggled to recognise her nephew’s neighbourhood because there were nothing but piles of wreckage and mud.

“He was a serious and kind person,” she said with tears in her eyes. “After he became physically disabled from an injury, he was very kind to everyone.” She turned away to return to her makeshift home, an evacuation centre. I still remember her despondent, lonely figure treading slowly and carefully through the mud.

The devastation that was left behind.
Photo: AP

As reports of damage and radiation leakage at the Fukushima Dai-ichi nuclear plant started to spread, (reporter) Eric Talmadge and I were faced with a very unusual situation - working in a possibly radioactive area. Being kilometres away from any physical tsunami damage, trying to calculate risk and our movements was very hard with this silent, invisible problem surrounding us. The fear of being radiated was very much on our minds.

Standing in line day after day to be scanned for radiation levels was nerve-racking. The long lines at relief centres of displaced residents - mothers with crying children, fathers and the elderly - all waiting and hoping not to be the one detected by the alarm. Every few dozen people, a loud chirp went off, causing everyone to stop and look to see who it was.

People with higher radiation levels were taken for further testing. It had the collective effect on everyone that this could happen to any of us. You might have been high above the water levels but straight in the path of the radiation wind. These were victims marked not by broken bones and cut flesh but by anxiety from an invisible threat.

Coffins in a Trench

You never know what is going to touch you. For me, it was a group of families wearing pajamas and track suits on a snowy morning in Higashi-Matsushima, one of the hard-hit coastal cities. They were lined up along trenches dug by backhoe in a city dump. The soldiers filled the trenches one by one, lowering in plain wooden coffins numbered with magic marker. An official called out names into a bullhorn. The families watched silently. The town crematorium had been destroyed, and the bodies had to be buried before spring came. There were too many for proper rites, and the people had nothing to offer their dead. Everything would have to be dug up later.

A tiny room packed with reporters was my home, the makeshift "media center" at Tokyo Electric Power Co., which ran the Fukushima nuclear plant. It looked like a sloppy classroom. It was depressingly unnerving to witness how unprepared the utility was for what was unfolding. Announcements were sporadic, piecemeal and often erroneous. At one point, the company said reactor-water radiation levels had surged to 10 million times normal. Then they realised they had misread the machine; the number was actually 100,000 times normal. It was surreal.

Strange words like strontium, cesium and tellurium were used every day. A TEPCO official lectured to me about how plutonium was so heavy it was unlikely to be blown too far by any explosion and a piece of paper would be enough to protect me. You had to be there to believe all the confusion mixed with apologies for giving out mistaken information. It was clear to me that no one really knew what was happening. We had been thrust into uncertainty. Expectations that I’d taken for granted - clean water, safe food, even dying a natural death - had gone.

"All in one frame"

One month after the disaster struck, we slipped into the evacuation zone around the Fukushima Dai-ichi nuclear facility. We approached as near as we dared, just a few kilometres from the plant, and through my viewfinder I saw a scene straight from a science fiction movie: Men in white spacesuits carrying body bags across the gray ash-like wasteland left by the tsunami. Curtains flapping from windows of washed-up bungalows, beached fishing boats and a crumbled road filled the foreground. In the distance were the iron chimneys of the nuclear plant. The scene captured all aspects of the triple disaster, and as I stepped back from my camera I thought, "Wow, I’ve got it all in one frame."

A glimpse of feet pressing against the end of body bags reminded me that it wasn’t just art. So too did the frantic bleeps of the dosimeter we’d brought, though we knew short radiation exposure at this level was no real threat. Police in radiation suits only made a half-hearted attempt to tell us to leave.

A shopkeeper back to collect some valuables spoke to us in a wistful but matter-of-fact way. "I can’t come back here," he said before driving away. But he put his rubbish in the bin before leaving, which told me some day he thought he would.

“The town that lived"

About two months after the tsunami, I stumbled upon a coastal village in the disaster zone that should have been obliterated, as communities to its north and south were. But there it was, intact. I came to call Fudai in Iwate prefecture "the town that lived."

It owed its survival to a former 10-term mayor whose memories of a 1933 tsunami fuelled a lifelong obsession to protect his town from the sea. In 1967, Fudai erected a 15.5-metre-high (51-foot-high) seawall to shield neighbourhoods behind its fishing port. Mayor Kotaku Wamura insisted on an equally tall floodgate for a nearby cove where most of the homes were. He faced opposition and ridicule but never relented.

When the 2011 tsunami struck 14 years after Wamura died, the walls and floodgates, the tallest such barriers in the region, kept the town virtually unscathed. The only person lost had been out in his boat.

When I visited Fudai, villagers grateful to Wamura told me he was ultimately teaching them a larger lesson - the importance of conviction and never giving up on what you know is right.