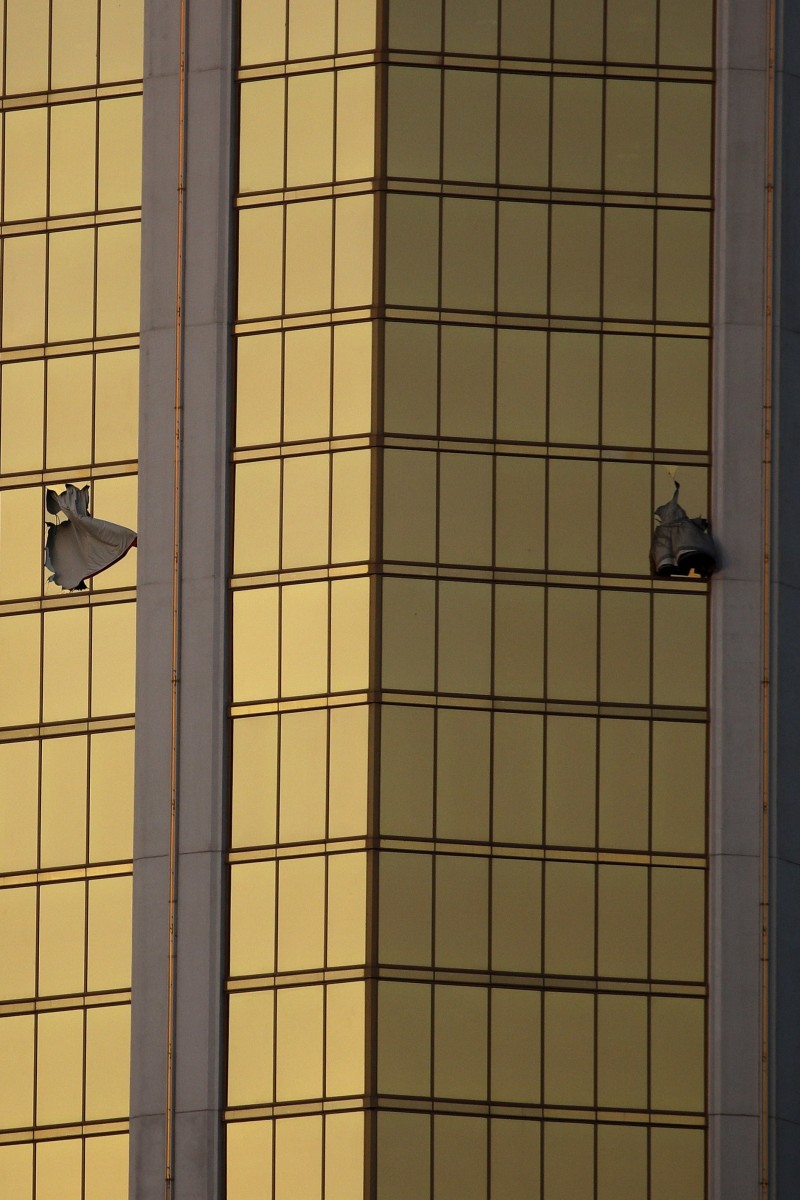 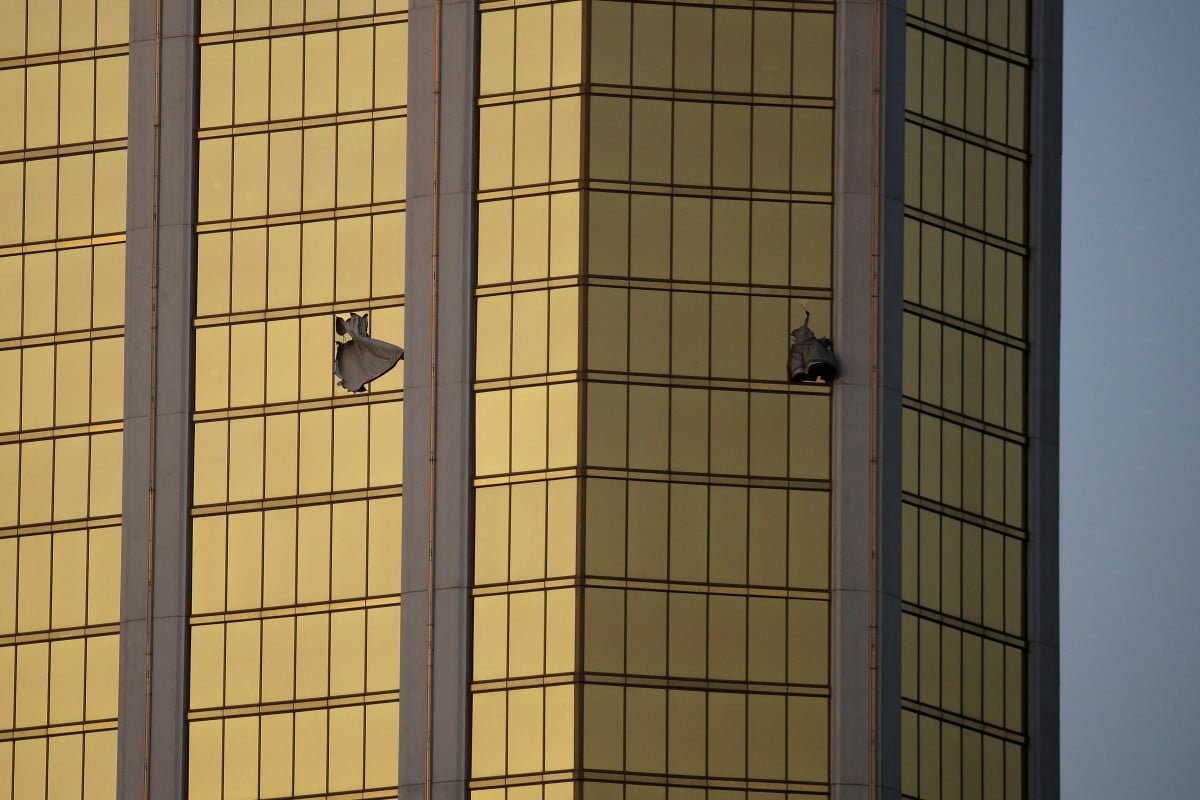 The search for the shooter took almost an hour.

The journey to the room at the end of the 32nd floor began at the switchboards of the Mandalay Bay Resort and Casino, a tropical fantasy in the Nevada desert.

As the noises began, dozens of confused guests pressed zero on their room phones almost all at once. The first callers asked about what sounded like a long burst of fireworks. Others wondered: Was it something else? The hotel operators realised that for callers on some floors, the popping was louder than for guests phoning in from others.

Outside the hotel entrance, Las Vegas Metropolitan Police officers were pinned down along South Las Vegas Boulevard, searching for the origin of what they knew was a barrage of gunshots. Someone had been firing into a crowd of country music fans at a venue across the street. Flashes had been seen halfway up the hotel’s north tower - a clue that then disappeared.

“Haven’t seen any flashes,” an officer said over the radio at 10:22pm Sunday. “There is a strobe light from one of those windows.”

A timeline of the Las Vegas shooting that killed 59 people

Almost exactly an hour after those observations, a SWAT (Special Weapons And Tactics) team burst into Stephen Paddock’s room and found the 64-year-old retired accountant dead; he had shot himself in the mouth with a handgun after spraying the concert crowd with bullets, killing 59 people and wounding more than 500 more.

The raid ended a search that drew on the geometry of Paddock’s frantic attack and the evidence gathered by the hotel’s operators, who narrowed down his location based on the calls coming from frightened guests.

Police believed at one point that there might have been as many as three attackers, then “confirmed” at least two. The volume of Paddock’s fire made hard to believe that one man was behind it. But in the end it was just Paddock, his motive still a mystery, a man who had taken extraordinary steps to monitor the progress of the raid on his room - a raid he knew would be coming.

Two people close to the investigation said Paddock set up remote video cameras, which streamed images through a tablet so he could see down the hall behind him as he fired into the audience below. Police found one camera on a room-service cart parked in the hallway awaiting pickup.

Probably alerted by the images of police approaching his suite at the end of a long hallway, Paddock fired numerous rounds through his door, hitting a hotel security guard who was clearing guest rooms one by one.

The guard, whose name has not been released, was wounded in the leg by pieces of metal kicked up from a rebounding bullet, which did not hit him directly. The police radio crackled soon after, “Mandalay security says shooter is on 32nd floor, they have security officer on that floor who was shot.”

Questions since the shooting, the worst in modern U.S. history, have focused in part on the adequacy of hotel security. Paddock managed over several days to assemble an 23 firearms in his room, many of them rifles, apparently bringing them up in 10 suitcases. Police and hotel security took more than an hour to find Paddock after he began firing.

But there is much about this city’s bright skyline that appears designed specifically for someone who does not want to be found. The sheer sizes of the Strip’s most popular hotels is chief among those features.

With three wings and more than 3,200 rooms, the Mandalay Bay stands as a primary example of the city’s architecture of anonymity, the relatively tiny black holes Paddock punched through the reflective gold-glass evidence of the security staff’s needle-in-a-haystack endeavour.

The search for his room began amid 11 minutes of sustained gunfire that scattered the 22,000 people at the Route 91 Harvest festival in an open-air concert ground across the street from the 40-storey-plus Mandalay Bay.

Inside his room on the 32nd floor, Sonny Morgan, in town from Georgia for a conference, dozed in front of the Sunday Night Football game. “I woke up to the sounds of gunshots,” Morgan recalled in an interview with WXIA-TV in Atlanta. “Initially, I had kind of thought that it may have been some fireworks . . . and then it just kept going and going and going.”

He called reception and was told to lock himself inside his room.

Then, after the furious initial barrage, the shooter paused.

For about three minutes, Paddock stopped firing, leaving officers who were trying to track the trajectory of the shooting with little to go on. An officer commented just after 10:20pm, “Been a while since we heard shots.”

A little more than a minute later, Paddock opened up again. “We are taking fire here!” one officer said, according to the radio transcript. “Advise officers do not go up on the boulevard.”

One officer spotted what he described as a “strobe light” coming from midway up the hotel’s north tower.

At the time, Mandalay hotel security and the Las Vegas police were sorting through officer observations about the trajectory of the shots and what they were learning from the guest calls coming into the call center. Police officials say they concluded that the shooter was firing from a room between the 29th and 32nd floors.

Security guards and police officers began clearing those floors, believing at the time that as many as three shooters might have been involved.

At about 10:27pm, as officers outside began setting up an emergency medical centre at the nearby Tropicana Hotel amid continuing gunfire, the Mandalay security officer made his way down the hall on the 32nd floor toward the room at the end.

Paddock, according to investigators and the radio transcript, gave himself away by firing through the door, but police were still convinced he was not alone.

“Have confirmed that there are two shooters with fully automated weapons,” an officer said, according to the transcript, about a minute after the hotel guard was wounded.

From that moment on, though, the room at the end of the hall went quiet.

Inside the hotel, the police moved toward Paddock, who had stopped firing.

“Moving up to the 32nd floor,” an officer said on the radio about a half-hour into the attack.

A minute later, from another officer, “Can confirm that there is no gunfire?”

“We’ve been here for the past [unclear] minutes and haven’t heard gunshots for oh, probably 15 minutes,” came the response.

Two minutes later, “We are covering the stairwell on 32.”

For the next half-hour, the SWAT team prepared for the raid. Morgan, the conference attendee, recalled in his interview with the Atlanta TV station, “I could hear the police making their way up the hallway, and they were basically breaking down the doors - opening the doors aggressively."

At about 11:25pm, the floor cleared except for the room at the end of the hall, a senior officer announced over the radio, “We are gonna set off outside the suspect’s door. We are gonna pop this and see if we get any kind of response from this guy.”

The raid did not last long. SWAT team members found Paddock on the floor, already dead.

Video from the hallway shows a room-service cart, probably the one in which Paddock placed a camera. Briefing reporters here Tuesday, Sheriff Joe Lombardo said room service did come to Paddock’s room. But he did not disclose at what time.

Lombardo praised the hotel security response, saying, “We would not have engaged this individual in the time lapse that we did without their assistance.”