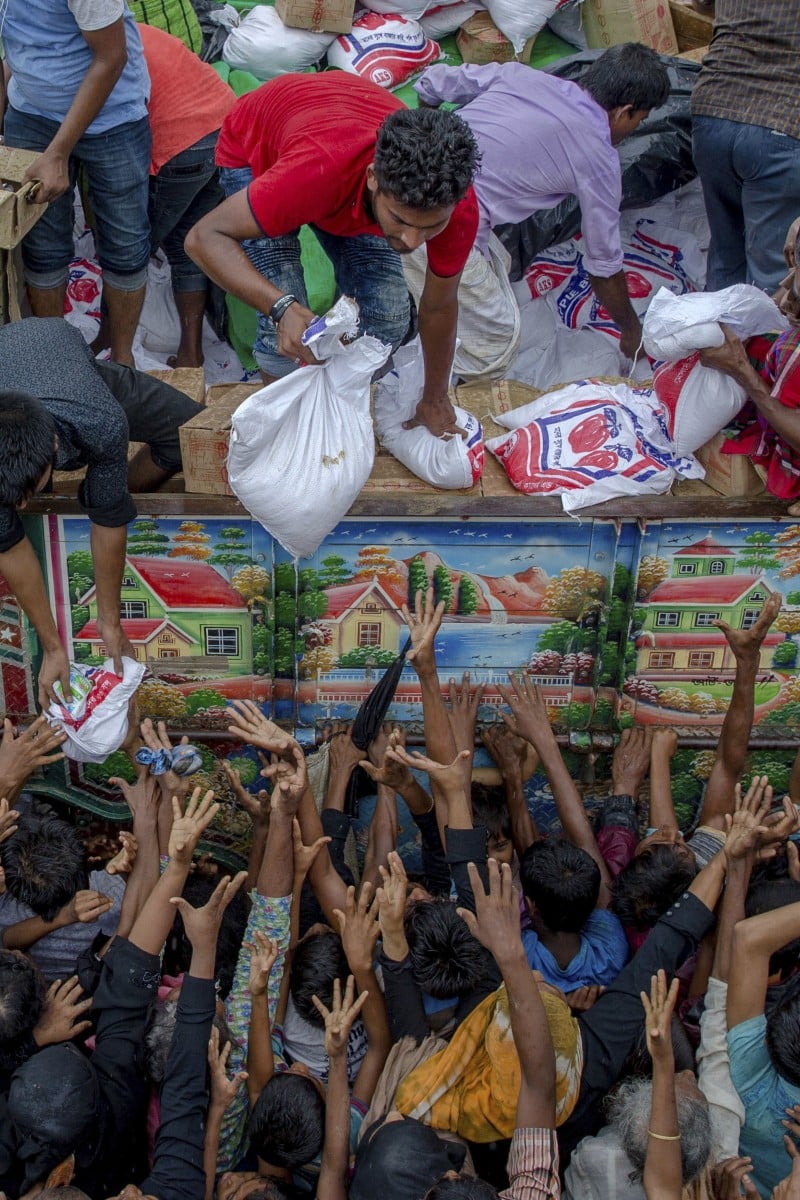 Food as a weapon: Hunger being used to target Rohingya in Myanmar 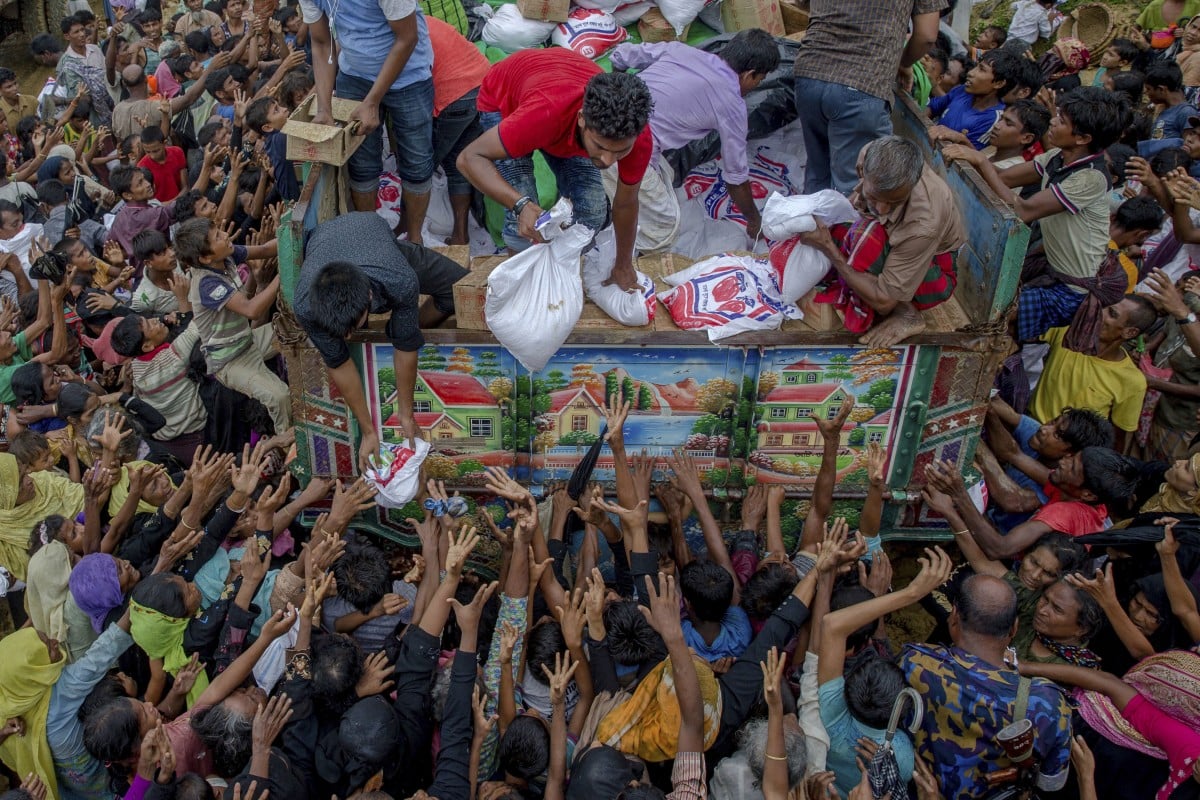 Rohingya refugees reach out for food from aid agencies in camps set up in Bangladesh.

Rohingya refugee Abdul Goni says the Myanmar government was starving his family one stage at a time.

First, soldiers stopped the Rohingya Muslim from walking three hours to the forest for the firewood he sold to feed his family. Then Buddhist neighbors and seven soldiers took his only cow, which he rented out to fertilise rice fields. Next, he says, they killed his uncle and tied his corpse up on a wire for trying to stop the theft of his buffalos.

By the time Goni saw bodies floating down the local river of fellow Rohingya killed for illegal fishing, he knew his family would die if they didn’t leave. On bad days, they ate the flesh of banana plant stalks for food. On the worst days, his children ate nothing.

“I felt so sorry that I couldn’t give them enough food,” the 25 year-old says, tears running down his face, in a refugee camp in Bangladesh, just across the border from Myanmar. “Everything just got worse and worse. ... Day by day, the pressure was increasing all around us. They used to tell us, ‘This isn’t your land. We’ll starve you out.’”

First, massacres, sexual crimes and the destruction of whole villages by the Myanmar military in the western Rakhine state forced nearly 700,000 Rohingya Muslims to flee to Bangladesh, in retaliation for Rohingya militant attacks on August 25 which killed at least 14 members of Myanmar security forces.

Now, the food supply appears to be another weapon that’s being used against the dwindling numbers of Rohingya in Myanmar.

Families with children are hit especially hard by the restrictions that limit ability to harvest food.
Photo: Associated Press

The accounts of hunger could not be independently confirmed, as Myanmar’s government does not allow reporters into the northern part of Rakhine state, where most of the Rohingya lived. However, more than a dozen interviews with the most recent refugees show growing desperation, in what United Nations (UN) officials have said may be genocide. The UN and human rights groups such as Amnesty International have also warned of increasing hunger among the Rohingya in conflict areas.

Repeated calls to Myanmar’s military weren’t answered, but the Myanmar government denies ethnic cleansing and says it is battling terrorists. Social Welfare Minister Win Myat Aye says the government has been distributing food aid to as many people as possible. “There are many ways that we have been reaching out to villagers frequently,” he says. “And that’s why it’s not possible that there are people who are completely cut off from food or facing hunger.”

The Rohingya Muslims, who have been hated by Myanmar’s Buddhist majority for decades, are locked down in their villages - sometimes even in their homes - and prevented from farming, fishing, foraging, trade and work, the refugees and aid groups say. In other words, they can no longer do what they need to do to eat. While restrictions on freedom of movement and access to food have long been in place, they have tightened dramatically in recent weeks.

“It was worse than a jail,” says Goni, who finally left Hpa Yon Chaung village in Buthidaung township on January 5. “People at least get food twice a day in jail. We were always surrounded, always under stress, always watched.”

The hunger the Rohingya faced at home is evident when they come to the Bangladesh camps, where new refugees, especially children and women, suffer from “unbelievable” levels of malnutrition, according to Dr. Ismail Mehr, who recently helped to treat refugees in the camps.

A child's arm is measured and checked for malnutrition as he arrives in a refugee camps.
Photo: Associated Press

The government’s restrictions on access to northern Rakhine make it almost impossible to tell how many people are without food, how widespread the problem is or whether people are dying. The International Committee of the Red Cross, based in Yangon, says that since the end of August it has distributed food to more than 180,000 people in northern Rakhine state.

Activists, aid groups and researchers say Myanmar squeezed the Rohingya by severely hampering many of the humanitarian operations that were crucial for their survival. Food aid was further disrupted by violence in 2016 and the bloodshed after Rohingya insurgents staged an unprecedented wave of 30 attacks on security posts across Rakhine state in August.

"Either they die, or we die" - the harsh reality of life for the Rohingya in Myanmar

Buddhists in Rakhine state began blocking food aid when they noticed that the Muslims were getting more than they were, according to Thomas MacManus, a specialist in international state crimes at Queen Mary University of London who has researched the Rohingya since 2012. Tightened curfews meant people couldn’t harvest shrimp or rice, tend to their cattle, gather firewood or fish. Since August, an almost 24-hour-a-day curfew means no one is leaving their villages, he says.

“What they’re trying to do is design a situation where life just doesn’t become livable anymore,” he says. “You just block off an area and they can’t get material or food. It is a time-honoured way of doing genocide, and one of the easiest ways because you can do it slowly and without too much attention.”

In this war on food, rice paddies are a major battlefield.