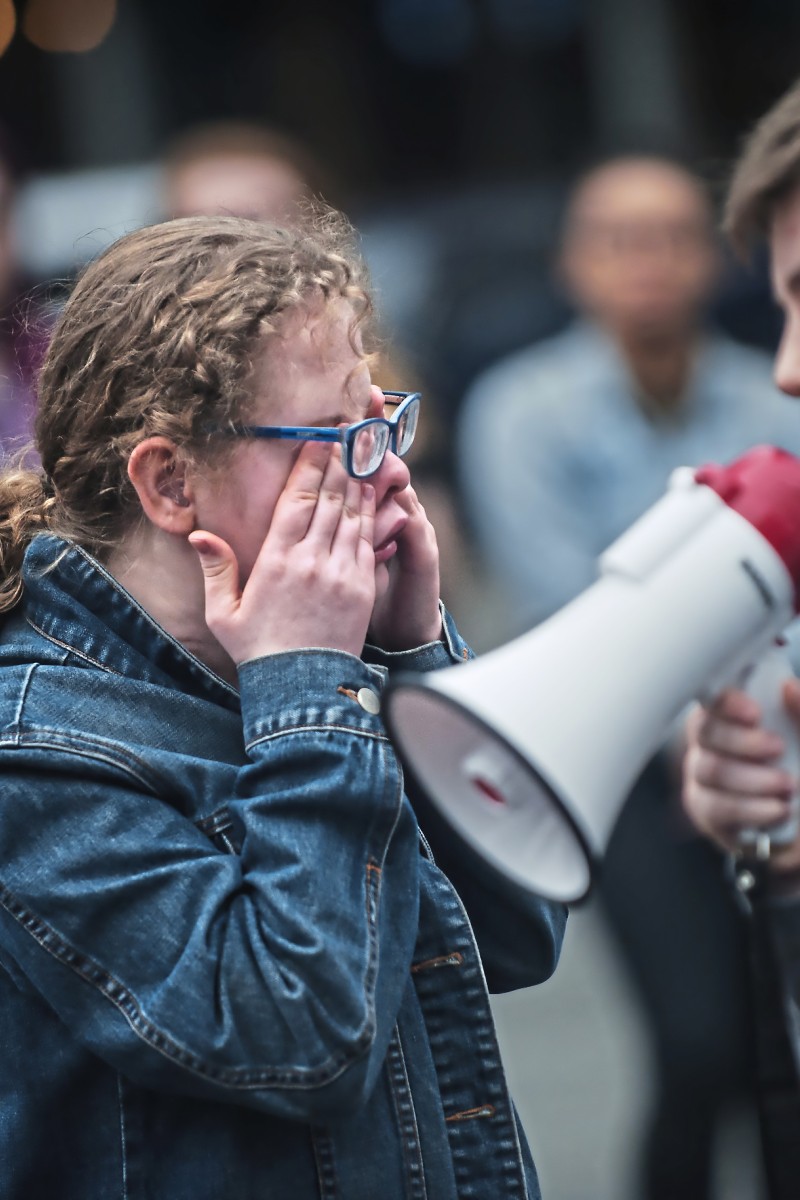 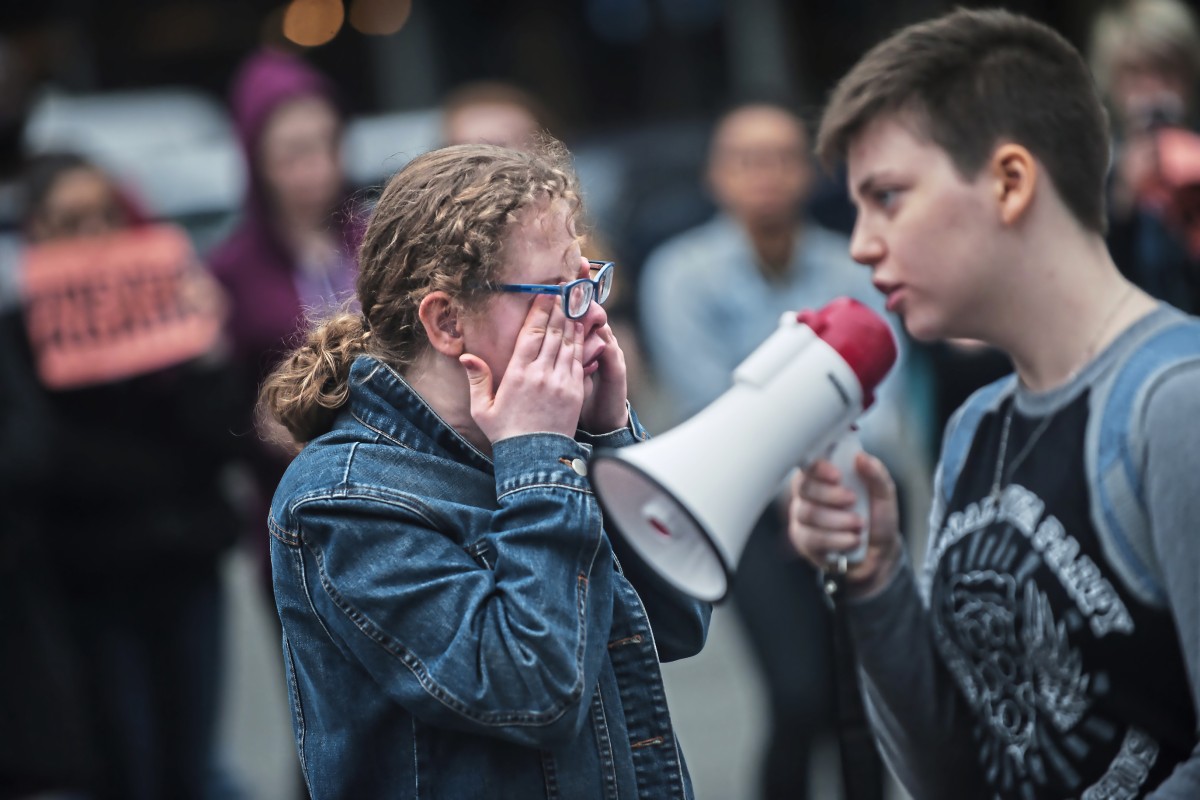 Student Taylor Fraasch wipes her tears as she prepares to speak during a walk-out in solidarity with other high schools across the US to show support for Parkland, Florida students.

Up until last week, most adults had never really considered what to call the group of American kids growing up behind the millennials.

Those born in the 2000s, who grew up alongside Facebook and Twitter, Snapchat and Instagram, have inspired plenty of commentary about the damaging effects of social media and selfies, but little reflection about what they might bring to the table. As with the two generations before them, they were not expected to change the nation in the way the now near-mythical boomers did.

Then a gunman walked into a Parkland, Florida, high school on Valentine’s Day, killing 17, injuring at least a dozen and terrorising hundreds more.

It’s hard to remember another moment when a changing of the guard was captured as quickly and dramatically, on screen and in real time, as we’re seeing now in the wake of the Marjory Stoneman Douglas High school shooting.

With a fearlessness born out of terror and loss, a generation maligned for being too soft and spilling all on social media was ready when a real cause came along.

Determined not to let another mass shooting fade away in a cloud of thoughts and prayers, these students clearly and cogently refuted the usual politicised narratives pumped out of DC after each mass shooting, first on television mere hours after the attack and then directly on Twitter: #We Call BS! quickly rolled into #WeAreTheChange.

They called out the NRA directly on CNN and Fox, and demanded adults reframe gun control as an issue of safety rather than a red-versus-blue-politics argument as usual. They appeared on late-night talk shows, and were accused by alt-right agitators of being fictional crisis actors hired by gun-hating leftists.

But this group who grew up navigating spin hasn’t taken the bait.

“People are saying that it’s not time to talk about gun control, and we can respect that,” Cameron Kasky, a junior at the high school, said on ABC’s This Week. “Here’s the time: March 24,” Kasky continued. “In every single city, we are going to be marching together as students begging for our lives. This isn’t about the GOP. This isn’t about the Democrats. This is about the adults. We feel neglected. At this point, you’re either with us or you’re against us.”

Politicians who haven’t budged from the standard “thoughts and prayers” stance since Columbine were caught off guard. By Wednesday’s meeting at the White House, it was clear they’d been rattled. Trump’s numbered crib notes, which he carried into the televised discussion, went viral after being captured by photojournalists. Point No. 5 read, “I hear you.”

US President Donald Trump's cheat sheet on what to say during a television debate about gun control.
Photo: Associated Press

Christened by gunfire and united by tragedy, Generation Z’s determination and ire didn’t just arrive with the media exposure of this particular school shooting, the latest in multiple such shootings of 2018. This generation has grown up with “active shooter” school drills and “code reds”. They were entering grade school when their first-grade peers were massacred at Sandy Hook Elementary.

No wonder so many of today’s fictional young people of television and film are fearless avengers who battle evil in smarter and more effective ways than their parents, protecting the adults who are supposed to protect them: Stranger Things, Supergirl, Marvel’s Runaways, Black Lightning.

As Parkland students marched toward their state capitol building on Wednesday, they looked like a high school debate team, not superheroes. An AR-15 rifle was used by the Parkland shooter and they were there to urge lawmakers to impose tighter gun restrictions, even though legislation regarding the ban of military-style firearms had been struck down the day before.

Some of the students wore jeans and carried backpacks. Others wore ill-fitting dress shirts and slacks that they appeared to have outgrown since the last formal event they had attended. Their public speaking event, however, was anything but the usual academic exercise associated with generations of high schoolers before them.

“When did politics and money from the NRA become more important than our lives?” asked Dimitri Hoth, a senior who described to the press and lawmakers the horror of surviving the attack.

The mild-mannered student, who recalled that his biggest concern in the hours before the attack was trying to get out of an after-school rehearsal, proclaimed: “NRA, we’re not afraid of you. You won’t silence us. Never again.”

Parkland survivor Dimitri Hoth is not afraid of the NRA.
Photo: Associated Press

It echoed this nation’s last big student uprising nearly a half-century ago, which also revolved around too many young people being shot at for no good reason. Perhaps the renewed interest in the Pentagon Papers and Vietnam War in films such as The Post is no coincidence.

If millennials and Gen X helped usher in the changes that led to pot legalisation, gay marriage laws and AIDS awareness, the teenagers of Gen Z might help break the logjam that has prevented changes in gun laws that the majority of Americans have wanted for so long.

The middle-aged who scoff at young people for their need of “safe spaces” might now think twice given that they actually do need safe spaces to hide from monsters who storm schools, colleges, movie theaters, churches and concert venues with weapons of war.

What could be more nonpartisan than saving kids lives, asked student David Hogg on Wednesday to a reporter.

The media persisted in the usual manner. Fox’s Outnumbered host Harris Faulkner asked Hogg what he had to say about Trump doing more to address gun violence issues than any other president before him.

“I don’t know, actually,” he answered, then steered the interview back toward common-sense solutions for gun control.

The FBI made horrific mistakes, she said, how do you respond to that?

Hogg again brought it back to action rather than blame.

The Fox host complimented Hogg for being well-spoken, “You are a blessed young man. I know a lot of people will say that they are praying for you. Please know that we are. And that we mean it. And God bless you.”

Hogg wasn’t about to let that go, “Yeah, but please take action as well.”