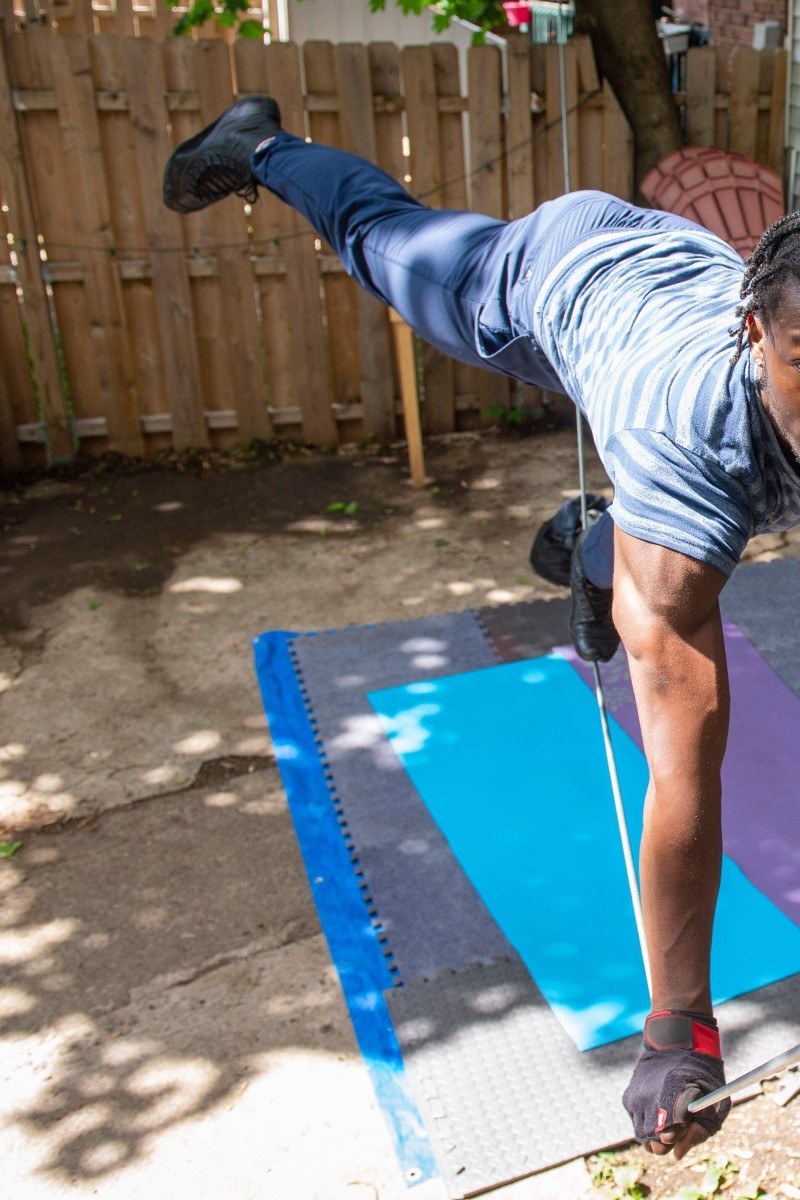 Antino Pansa, 20, a student and circus artist specialising in slackline, trains in his backyard in Montreal, Canada. Students soon to graduate from Montreal's esteemed National Circus School expect months of uncertainty but have tried, as best they can, to keep up their skills during a three-month pandemic lockdown. (Photo by Sebastien St-Jean / AFP)

Students soon to graduate from Montreal’s esteemed National Circus School expect months of uncertainty caused by the coronavirus pandemic, which has closed shows around the world and thrust their career prospects into doubt.

Head upside down, feet pointed to the sky, Antino Pansa balances on a slack wire strung in the courtyard of his apartment building, a few feet off the ground.

The makeshift installation allows the 20-year-old circus student to stay in shape despite the school’s closure in early March, due to the Covid-19.

“Several months without training is a lot,” Pansa tells AFP. “My only solution was to install a wire between two trees.”

“It creates a lot of constraints: I can’t do all my tricks on it,” he says, complaining of too many trees, a nearby staircase and other physical obstacles.

Pansa had expected to join a circus troupe in Switzerland for a six-month gig upon graduating at the end of June, but the offer was postponed.

In the meantime he has been forced to take a job as a security guard.

Montreal, home of Cirque du Soleil, has reinvented the circus once more - this time with a high-tech vibe

The pandemic has similarly upset career plans of 60 other students at this internationally renowned school.

At the end of three years of study, each normally puts on a show in front of headhunters from around the world scouting new circus talent.

But the pandemic has forced the cancellation of the performances.

“It’s unfortunate that we had to cancel, it’s a big loss, because it serves as a launching pad for graduates to enter the labour force,” said school director Eric Langlois.

Joaquim Verrier puts on a brave face, but says: “It is also very demoralising to say that the culture and entertainment industry is at a standstill.”

A look back at the Ringling Bros circus

Going from 15 hours of training per week at school to three or four hours in his apartment, the cigar box juggler says it is “very difficult to stay motivated,” but he considers himself “lucky” at least to be able to continue practicing.

Others cannot and worry about it. “I worked so much, so much, it’s hard to get to my level,” says tightrope walker Joel Malkoff.

The 25-year-old American, who used to train every day, is alarmed by the idea that he may not be able to practice his discipline again on a professional level: “That’s what scares me.”

Antino Pansa balances on a slack wire strung in the front courtyard of his apartment building, a few feet off the ground. The makeshift installation allows the 20-year-old circus student to stay in shape despite the school's closure in early March, due to the coronavirus pandemic. (Photo by Sebastien St-Jean / AFP)

Cirque du Soleil, Canada’s cultural flagship on the brink of bankruptcy, had to cancel 44 productions worldwide and lay off 4,679 acrobats and technicians, amounting to 95 per cent of its workforce.

While 95 per cent of its graduates normally find work at circus companies, in cabarets or aboard cruise ships, its director says nobody is hiring at the moment and the sector is not expected to bounce back for another 18 to 24 months.

This year’s graduating class of 21 students is facing a total loss, Langlois said.

According to an April survey of 561 circus workers and organisations, 66 per cent expect to have to retrain in another field.

At 23, Verrier brushes aside the idea of letting go of his passion.

“I trained for five years to become a circus artist and I would find it a shame not to be one,” he said, refusing to let the pandemic “stop me from following my dream.”