News you might have missed: Former Trump official Steve Bannon arrested; robbery at the Ninja Museum

Dannie Higginbotham
Dannie Higginbotham is the Web Editor for Young Post. She has previously lived and worked in South Korea, Ecuador and the United States, and has a Master's degree in International and Public Affairs from the University of Hong Kong. She specialises in topics related to health and wellness, relationships, international relations and US politics and history.
expand
Comment
Copied 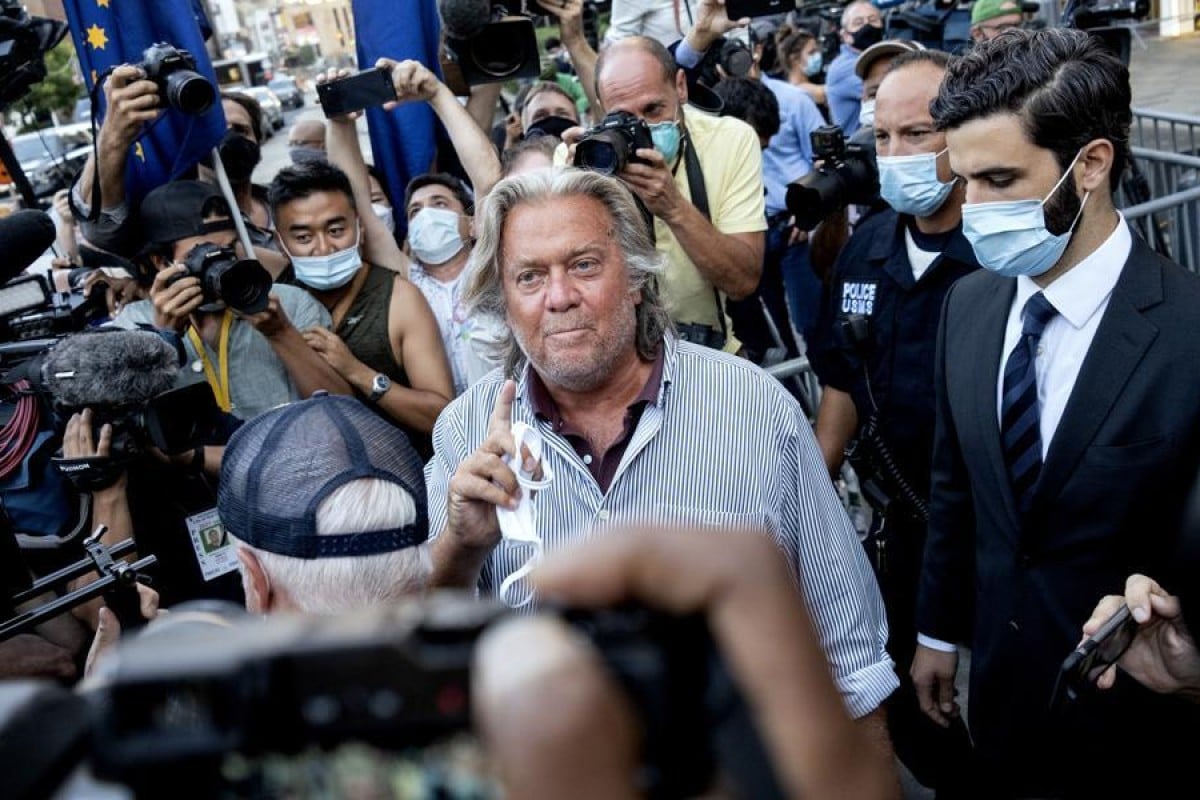 President Donald Trump's former chief strategist Steve Bannon leaves federal court after pleading not guilty to charges that he ripped off donors to an online fundraising scheme to build a wall on the US border with Mexico. Photo: AP

Former Trump advisor Steve Bannon was recently arrested for defrauding donors as part of a fundraising campaign allegedly aimed at building the border wall with Mexico.

He was arrested on the yacht of Chinese dissident Guo Wengui by federal agents, the Coast Guard (a branch of the US military that focuses on security of the nation’s coast) and, strangely enough, officials from the United States Postal Inspection Service, the post office's crime prevention force, which we've never heard of before but now desperately need to see a TV show about.

Bannon was arrested along with three other people for reportedly starting a crowdfunding campaign called We Build The Wall, which raised more than USD$25 million, and using hundreds of thousands of dollars of the donations for their own personal expenses.

One of the men arrested spent the money on things like cosmetic surgery, a luxury car, and payments on a boat.

Bannon served in the Trump administration from the time he was inaugurated in January 2017 until August of the same year.

If only there were ninjas to stop it

Thieves successfully carried out a heist at the Ira-ryu Ninja Museum in central Japan, making off with more than a million yen (HKD$73,457).

Police officers were called to the scene around 1:30am on Monday, shortly after an alarm was set off, and found that an office door had been forced open with what appeared to be a crowbar. The safe, containing money from the admissions fees for more than 1,000 visitors, had been stolen.

The Ninja Museum allows visitors to learn about and throw ninja weapons and watch ninja shows and is a popular tourist attraction in the area.

It has not been reported if the thieves themselves were ninjas, but it would make sense.

A Russian opposition leader and outspoken critic of Vladmir Putin is in a coma after falling ill from a suspected poisoning.

Alexey Navalny began feeling unwell on a flight to Moscow from a city in Siberia, causing the plane to make an emergency landing.

His spokesperson says they assume Navalny was poisoned with something mixed into the black tea he had at an airport cafe before take off, as it was the only thing he had that morning. However, he hasn’t yet been officially diagnosed.

French President Emmanuel Macron said his country was prepared to offer assistance to Navalny and his family in terms of health, asylum and protection, and a German NGO announced it would send a plane into Russia in an attempt to evacuate the activist.

It’s not the first time this has happened to a Russian activist; one of the most prominent cases was in 2006, when a former Russian spy was poisoned by Russian agents with the highly radioactive polonium-210.

The US state of Florida has announced it will release 750 million genetically modified mosquitoes into the wild, with the aim to reduce the number of mosquitoes that carry diseases like dengue or the Zika virus.

The mosquitoes are of the Aedes aegypti variety. Normally, this type can carry diseases which can be deadly for humans. However, only the females bite people, because they need the blood to produce eggs. The genetically modified mosquitoes are all males and carry a protein that will kill off any female offspring before they reach breeding/biting age. The males in this species only feed on nectar, so there would be less danger to humans.

Environmental groups are wary of the move and warn against the consequences, calling it a ‘Jurassic Park experiment’, but the company who produced them says they have released millions of the mosquitoes over the years and there is no potential for risk.

We're getting itchy just thinking about this.

Donald Trump keeps using Queen songs on social media – and the band isn’t happy about it.

Earlier this week, Trump’s campaign used the 1977 hit ‘We Will Rock You’ in a video on Trump’s Triller account. Despite Queen’s protests, the video is still live and has nearly one million views.

The band’s management says it has “repeatedly taken issue with the Trump campaign” and said the president has a history of using their songs against their will, such as when Trump walked on stage to ‘We are the Champions’ during the 2016 Republican National Convention.