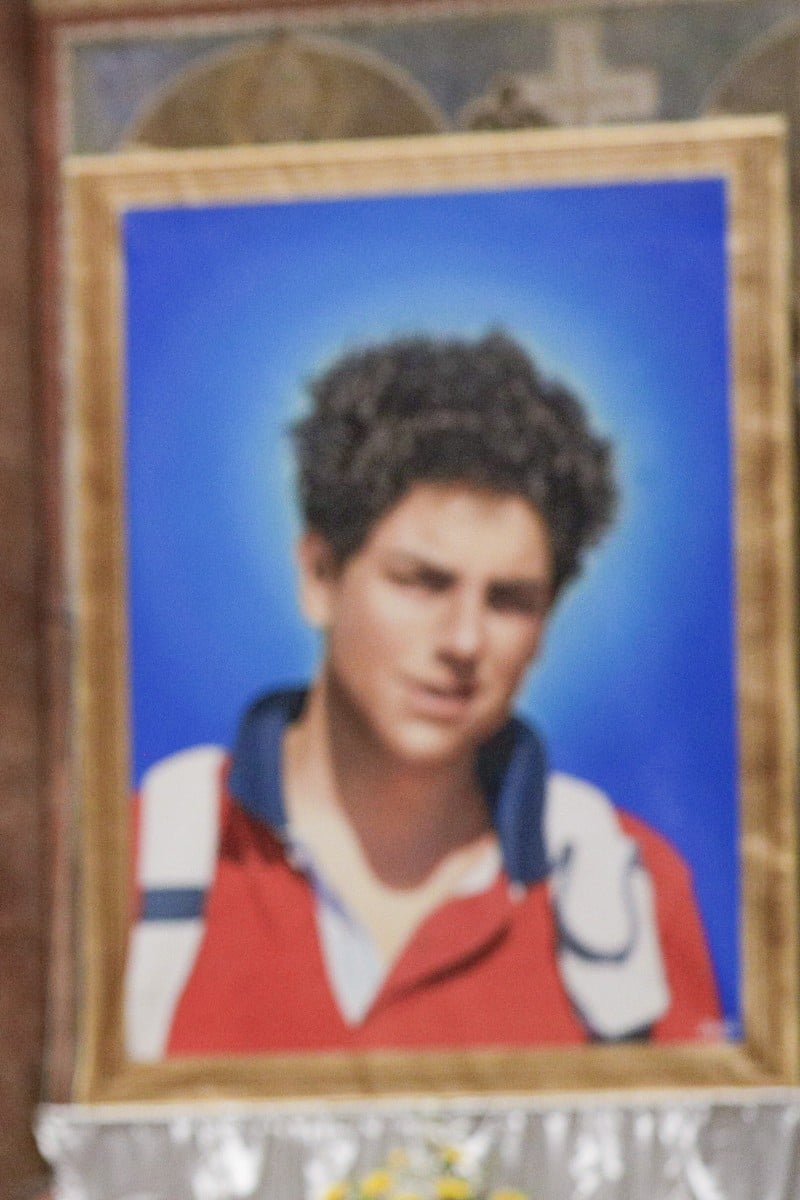 Millenial teen Carlo Acutis on the road to becoming a saint 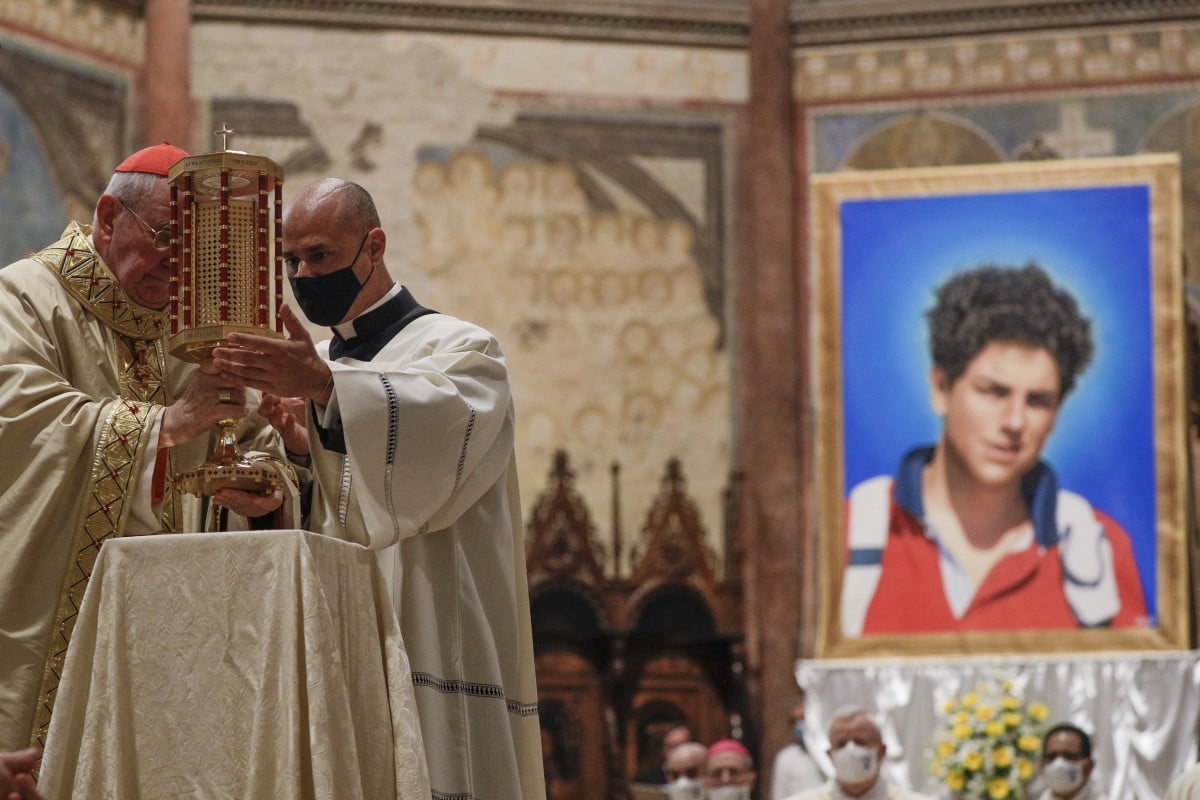 Carlo Acutis was beatified, the first step towards being recognised as a saint. Photo: AP

A 15-year-old Italian computer whiz who died of leukaemia in 2006 moved a step closer to possible sainthood Saturday with his beatification in the town of Assisi, where he is buried.

Carlo Acutis is the youngest contemporary person to be beatified, the first step towards being named a saint, when the Catholic Church officially recognises a person is in heaven, and that they can act for people praying to them.This is the path taken by two Portuguese shepherd children living in the early 1900s who were proclaimed Catholic saints in 2017.

At the beatification ceremony in the Basilica of Saint Francis of Assisi, a portrait of Carlo was slowly unveiled, revealing a smiling teen in a red polo shirt, his curly dark hair illuminated by a halo of light.

Cardinal Agostino Vallini kissed each of the boy’s mask-wearing parents, Andrea Acutis and Antonia Salzano, after reading the proclamation decreed by Pope Francis.

Already touted as the “patron saint of the internet,” Carlo created a website to catalogue miracles and took care of websites for some local Catholic organisations.

While still in primary school, Carlo taught himself to code using a university computer science textbook, and then learned how to edit videos and create animation.

15-year-old Carlo Acutis, an Italian boy who died in 2006 of leukemia, lies in state ahead of being beatified by Cardinal Agostino Vallini, in Assisi, Italy, Saturday, Oct. 10, 2020. (AP Photo/Gregorio Borgia)

“Carlo used the internet in service of the Gospel, to reach as many people as possible,” the cardinal said during his speech, adding that the teen saw the web “as a place to use with responsibility, without becoming enslaved”.

“He was considered a computer genius ... But what did he do? He didn’t use these media to chat, have fun,” Salzano, his mother, said in an interview with Vatican News.

Instead, “his zeal for the Lord” drove him to make a website on miracles, she said.

Pope Francis referred to the millenial teen last year, in a warning to youngsters that social networks could foment hate.

“[Carlo]) saw that many young people, wanting to be different, really end up being like everyone else, running after whatever the powerful set before them with the mechanisms of consumerism and distraction,” Francis said.

“As a result, Carlo said, ‘everyone is born as an original, but many people end up dying as photocopies’. Don’t let that happen to you!” he said.

Social media bullying pushes many teenagers off the platforms

When he wasn’t writing computer programmes or playing football, Carlo was known in his neighbourhood for his kindness to those living on society’s margins.

“With his savings, he bought sleeping bags for homeless people and in the evening he brought them hot drinks,” his mother said. “He said it was better to have one less pair of shoes if it meant being able to do one more good work.”

People attend the beatification ceremony of 15-year-old Carlo Acutis, an Italian boy who died in 2006 of leukemia, in front of the St. Francis Basilica, in Assisi, Italy, Saturday, Oct. 10, 2020. (AP Photo/Gregorio Borgia)

“When he died, at the funeral, the church was full of poor people. Everyone else wondered what they were doing there. Well, Carlo used to help them in secret,” said Nicola Gori, who represented Carlo’s beatification case.

Carlo was born in London on May 3, 1991, to Italian parents and moved to Milan as a child. Already as a small child, he showed a strong religious devotion that surprised his parents who were not interested in religion.

His mother told the Corriere della Sera newspaper that from age of three he would ask to visit churches they passed in Milan, and by time he was seven had asked to receive the sacrament of Holy Communion, winning an exception to the customary age requirement.

His curiosity prompted her to study theology in order to answer his questions, renewing her own faith.

An image of 15-year-old Carlo Acutis, an Italian boy who died in 2006 of leukemia, is seen during his beatification ceremony celebrated by Cardinal Agostino Vallini in the St. Francis Basilica, in Assisi, Italy, Saturday, Oct. 10, 2020. (AP Photo/Gregorio Borgia) He was put on the road to sainthood after Pope Francis approved a miracle attributed to Carlo: The healing of a seven-year-old Brazilian boy from a rare pancreatic disorder after coming into contact with a Carlo relic, a piece of one of his T-shirts.

“I was sure he was already a saint while alive. He healed a woman from cancer, praying to the Madonna of Pompeii,” his mother told Corriere.

Another verified miracle is necessary for sainthood, although Pope Francis has waived that on rare occasions.

Carlo was buried in Assisi at his own requests, having become an admirer of St Francis of Assisi for his dedication to the poor. The Italian town was one of his favourite travel destinations. His body, clad in a tracksuit and sneakers, has been on display for veneration in a sanctuary in the town, and his heart will be displayed in a reliquary in the St Francis Basilica.

Acutis told his mother that he would give her many signs of his presence after death.

“Before he left us, I told him: ‘If in heaven you find our four-legged friends, look for Billy, my childhood dog that he never knew’,” the mother said. One day she got a call from an aunt who was unaware of the mother-son pact, saying “I saw Carlo in a dream tonight. He was holding Billy in his arms.”