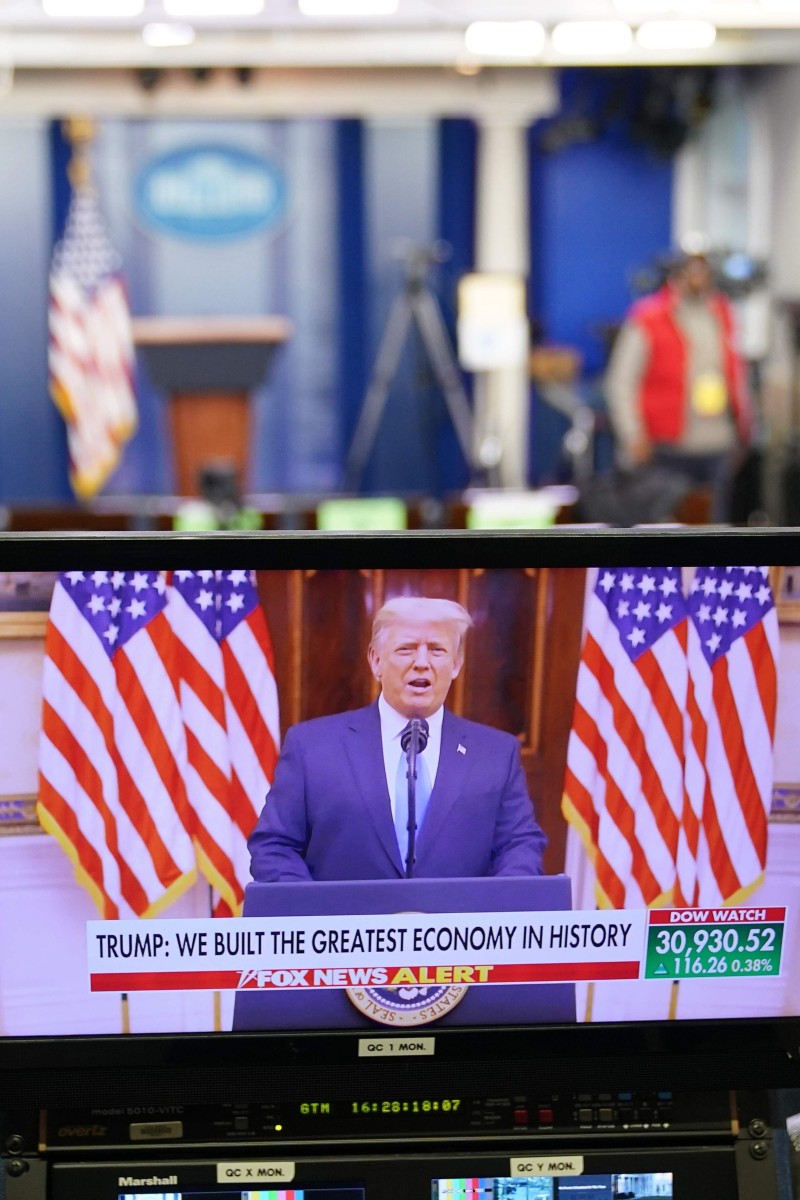 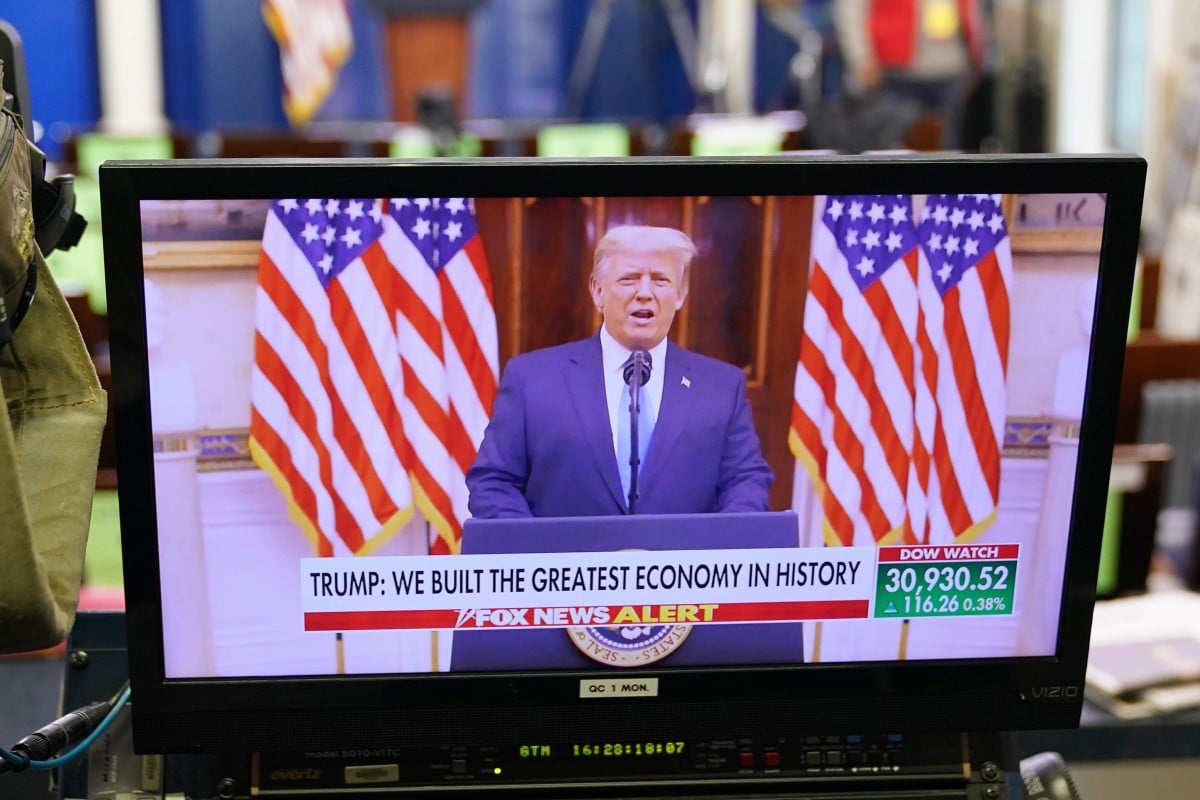 In his farewell speech, US President Donald Trump made several claims that exaggerated or twisted the truth. Photo: AFP

On his final day in the job, President Donald Trump gave a farewell speech. In it, he claimed credit for things he didn’t do and twisted his record on jobs, taxes, the pandemic and much more.

Among other falsehoods, in noting Americans were “horrified” by the storming of the Capitol this month, he brushed past the encouragement he had given to the mob in advance and his praise of the attackers as “very special” people while they were still ransacking the seat of power.

A look at some of his statements from the Tuesday speech:

TRUMP: “Another administration would have taken three, four, five, maybe even up to 10 years to develop a vaccine. We did in nine months.”

THE FACTS: Actually, the administration didn’t develop any vaccines. Pharmaceutical companies did. And one of the two US companies that have come out with vaccines now in use did not take development money from the government.

Trump’s contention that a vaccine would have taken years under a different administration stretches credulity. Covid-19 vaccines were indeed remarkably fast, but other countries have been developing them, too. A vaccine for the coronavirus is not a singular achievement of the United States, much less the Trump administration.

US drugmaker Pfizer developed its vaccine in partnership with Germany’s BioNTech, eschewing federal money for development, though benefitting from an advance commitment from Washington to buy large quantities if the vaccine succeeded. A vaccine by Moderna, from the US, is also in widespread use.

But Britain’s AstraZeneca-Oxford vaccine is being administered in several countries and vaccines from China and Russia are also in limited use. More than a dozen potential vaccines are in late stages of testing worldwide.

THE FACTS: No, he did not get the Choice programme passed. President Barack Obama did. Trump expanded it.

Veterans Affairs is the government department that provides health care services to eligible military veterans. The programme allows veterans to get medical care outside the Veterans Affairs system under certain conditions. Trump has tried to take credit for Obama’s achievement scores of times.

TRUMP: “We passed the largest package of tax cuts and reforms in American history.”

THE FACTS: His tax cuts are not close to the biggest in US history.

It’s a US$1.5 trillion tax cut over 10 years. As a share of the total economy, a tax cut of that size ranks 12th, according to the Committee for a Responsible Federal Budget.

5 of the biggest moments ever in US election history

President Ronald Reagan’s 1981 cut is the biggest, followed by the 1945 roll-back of taxes that financed then second world war.

Post-Reagan tax cuts also stand among the historically significant: President George W. Bush’s cuts in the early 2000s and Obama’s renewal of them a decade later.

TRUMP: “We also built the greatest economy in the history of the world.”

THE FACTS: No, the numbers show it wasn’t the greatest in US history. And he is the first president since Herbert Hoover in the Depression to leave office with fewer jobs than when he started.

Did the US have the most jobs on record before the pandemic? Sure, the population had grown.

The 3.5 per cent unemployment rate before the recession was at a half-century low, but the percentage of people working or searching for jobs was still below a 2000 peak.

Nobel Prize-winning economist Paul Romer looked at Trump’s economic growth record. Growth under Trump averaged 2.48 per cent annually before the pandemic, only slightly better than the 2.41 per cent gains achieved during Obama’s second term. By contrast, the economic expansion that began in 1982 during Reagan’s presidency averaged 4.2 per cent a year.

THE FACTS: Not an ignition. Job creation actually slowed in 2017, Trump’s first year in office, to about 2 million, compared with nearly 2.5 million in 2016, Obama’s last year in office.

The low unemployment rates refer to a pre-pandemic economy that is no more. The pandemic has cost the US economy 10 million jobs and has made Trump the first president since Herbert Hoover to oversee a net loss of jobs.

The great tradition of handwritten notes, from the outgoing US president to the new boss

The US has about 2.8 million fewer jobs now than when Trump was inaugurated, and lost 140,000 just in December. And the job losses have fallen disproportionately on Black Americans, Hispanics and women.

TRUMP: “We rebuilt the American manufacturing base, opened up thousands of new factories, and brought back the beautiful phrase ‘Made in the USA’.”

THE FACTS: That’s a stretch. There are now 60,000 fewer manufacturing jobs in the US than when Trump took office. Despite gains before the pandemic, the manufacturing base had not exactly been “rebuilt”.

Before the coronavirus, nearly 500,000 manufacturing jobs were added under Trump, somewhat better than the nearly 400,000 gained during Obama’s second term.

Still, even before the pandemic, the US had 4.3 million fewer factory jobs than it did in 2001, the year China joined the World Trade Organisation and a flood of cheaper imports from that country entered the US.

TRUMP: “All Americans were horrified by the assault on our Capitol. Political violence is an attack on everything we cherish as Americans. It can never be tolerated.”

THE FACTS: That may sum up the reaction of most Americans but it ignores his own part in stirring the anger of his supporters before they staged the violent melee.

For months, Trump falsely claimed the November election was stolen, then invited supporters to Washington and sent them off to the Capitol with the exhortation to “fight like hell”.

With the uprising still under way and the velocity of the attack apparent from video and reports from the scene, Trump released a video telling them “to go home now”, while repeating “this was a fraudulent election” and adding: “We love you. You’re very special.”

The House impeached Trump, accusing him of inciting an insurrection. Senate Republican leader Mitch McConnell, a Trump political ally for four years, said on Tuesday the Trump supporters were “fed lies” and ”provoked by the president and other powerful people”.

TRUMP: “We imposed historic and monumental tariffs on China. ... Our trade relationship was rapidly changing, billions and billions of dollars were pouring into the US, but the virus forced us to go in a different direction.”

THE FACTS: That’s a familiar assertion, false to the core.

Tariff money coming into the government’s coffers is mainly from US businesses and consumers, not from China. Tariffs are primarily if not entirely a tax paid domestically.

TRUMP: “We obliterated the ISIS caliphate.”

THE FACTS: His suggestion of a 100 per cent defeat is misleading, as the Islamic State (IS) group still poses a threat.

IS was defeated in Iraq in 2017, then lost the last of its land holdings in Syria in March 2019, marking the end of the extremists’ self-declared caliphate.

Still, extremist sleeper cells have continued to launch attacks in Iraq and Syria in recent weeks and are believed to be responsible for targeted killings against local officials and members of the Syrian Democratic Forces.

The continued attacks are a sign that the militant group is taking advantage of governments otherwise focused on the pandemic and the ensuing slide into economic chaos. The virus is compounding long-time concerns among security and UN experts that the group will stage a comeback.