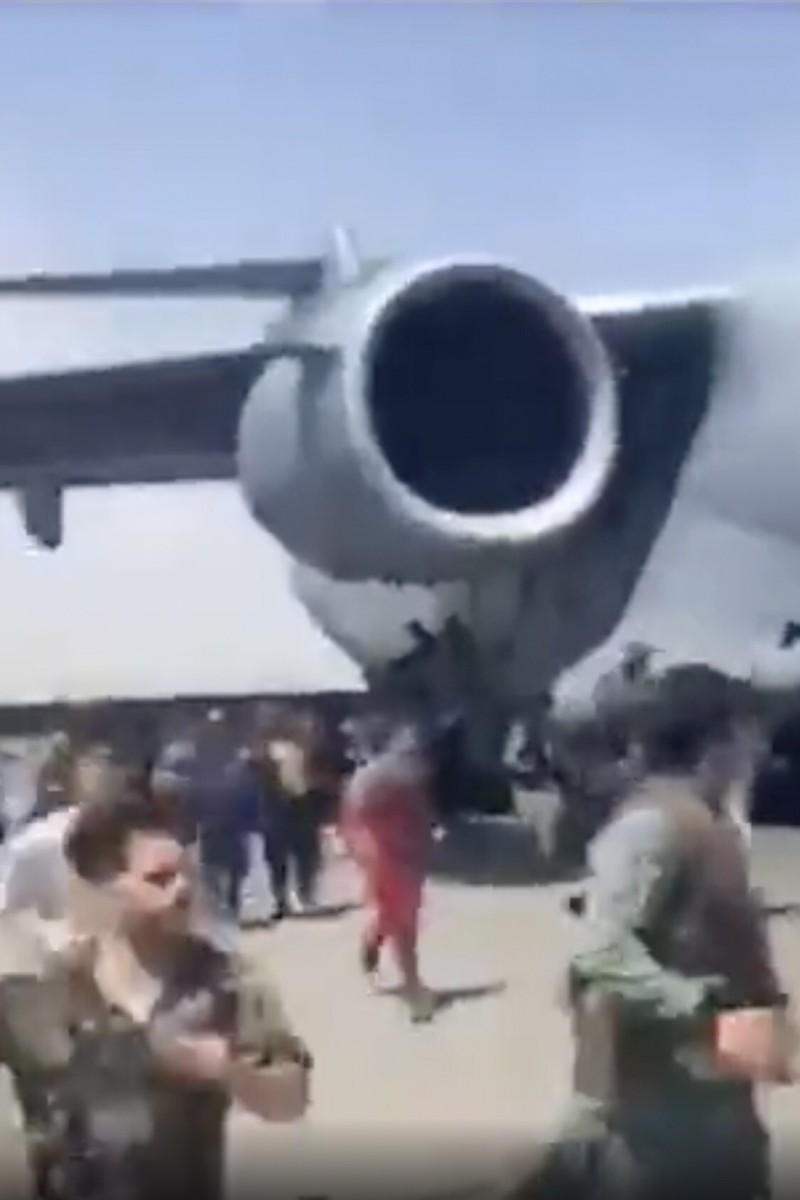 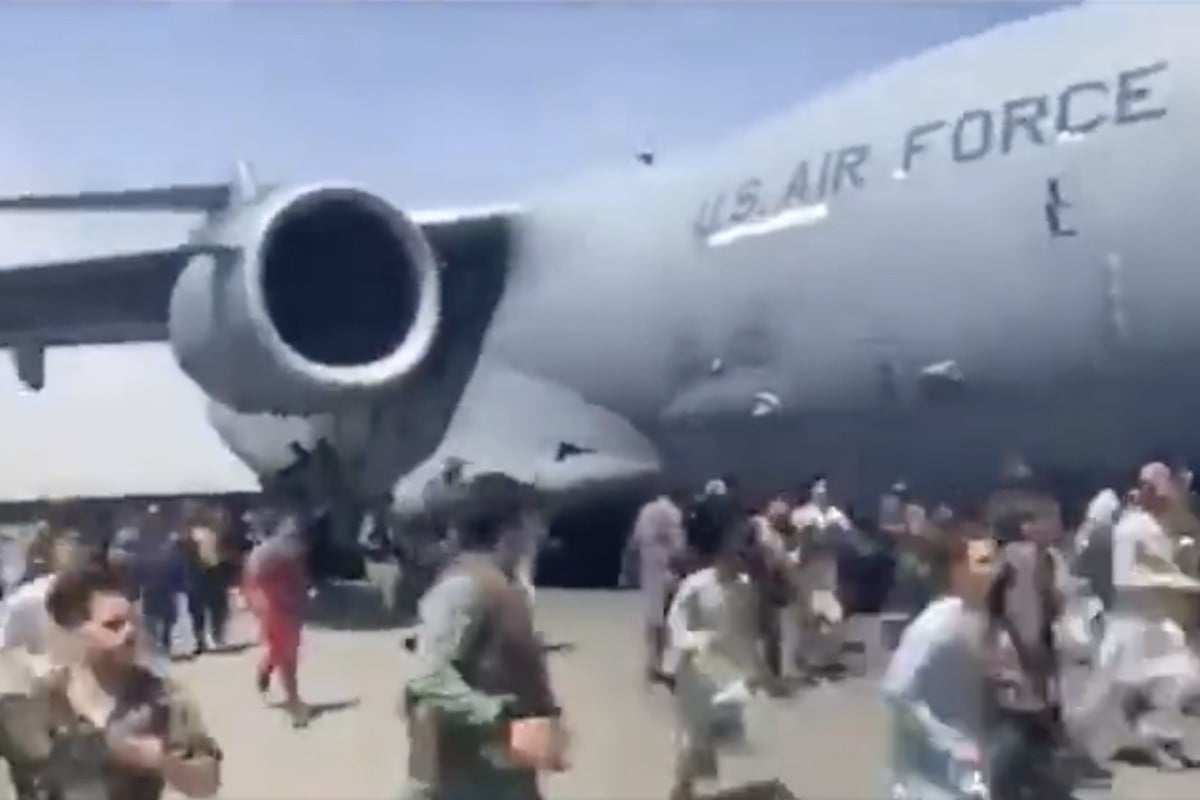 Hundreds of people run alongside a US Air Force C-17 transport plane as it moves down the runway of the international airport in Kabul, Afghanistan, on Monday. Photo: Verified UGC via AP

Thousands of Afghans rushed onto the tarmac of Kabul’s international airport Monday, so desperate to escape the Taliban capture of their country that they held onto an American military jet as it took off and plunged to death in chaos that killed at least seven people, US officials said.

The crowds of people rushing the airport came as the Taliban enforced their rule over the wider capital after a lightning advance across the country, removing the Western-backed government in just over a week. While there were no major reports of abuses, many stayed home and remained fearful as the Taliban’s advance saw prisons emptied and armories looted.

The Taliban swept into Kabul on Sunday after President Ashraf Ghani fled the country, bringing an end to a two-decade campaign in which the US and its allies had tried to transform Afghanistan. The country’s Western-trained security forces collapsed or fled, ahead of the planned withdrawal of the last American troops at the end of the month.

Residents raced to Kabul’s international airport, where the “civilian side” was closed until further notice, according to Afghanistan’s Civil Aviation Authority. The US military and other Western forces continued to organise evacuations, mainly for their personnel.

Videos circulating on social media showed hundreds of people running across the tarmac as US troops fired warning shots in the air. One showed a crowd pushing and shoving its way up a staircase, trying to board a plane, with some people hanging off the railings.

In another video, hundreds of people could be seen running alongside a US Air Force C-17 transport plane as it moved down a runway. Some clung to the side of the jet just before takeoff. Another video showed several falling through the air as the airplane rapidly gained altitude over the city.

A brief guide of what’s going on in Yemen

Senior military officials, who spoke on condition of anonymity to discuss the ongoing operation, said that the chaos left seven dead, including several people who fell from the flight.

The storming of the airport, seen from space by passing satellites, raised questions about how much longer aircraft would be able to safely take off and land.

Shafi Arifi, who had a ticket to travel to Uzbekistan on Sunday, was unable to board his plane because it was packed with people who had raced across the tarmac and climbed aboard, with no police or airport staff in sight.

Crowds of people are seen on the tarmac at Kabul’s airport in Afghanistan August 16, 2021. Photo: SATELLITE IMAGE 2021 MAXAR TECHNOLOGIES/Handout via REUTERS.

“There was no room for us to stand,” said the 24-year-old. “Children were crying, women were shouting, young and old men were so angry and upset, no one could hear each other. There was no oxygen to breathe.”

After a woman fainted and was carried off the plane, Arifi gave up and went back home.

Afghans are also trying to leave through land border crossings, all of which are now controlled by the Taliban. Rakhmatula Kuyash, 30, was one of the few people with a visa allowing him to cross into Uzbekistan on Sunday. He said his children and relatives had to stay behind.

Taliban fighters stand guard along a roadside near Zanbaq Square in Kabul on August 16, 2021, after a stunningly swift end to Afghanistan’s 20-year war, as thousands of people mobbed the city’s airport trying to flee the group’s feared hardline brand of Islamist rule. Photo: AFP via Getty Images/TNS

“I’m lost and I don’t know what to do. I left everything behind,” he said.

A senior US official said “it’s heartbreaking” to see what’s happening in Kabul, but that President Joe Biden “stands by” his decision to pull out because he didn’t want the war there - already the longest in US history - to enter a third decade.