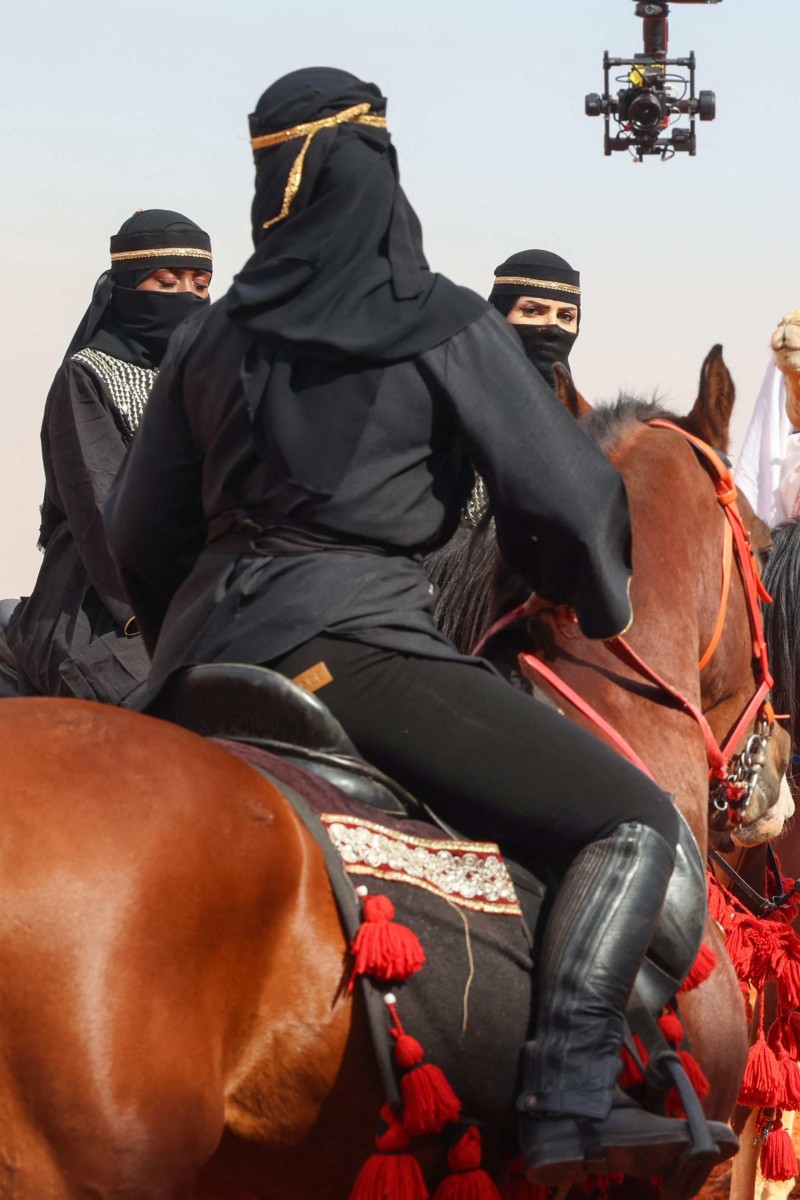 The sixth King Abdulaziz Camel Festival has introduced a round for women camel owners, allowing them for the first time, to showcase their animals in the annual camel beauty contest. Photo: AFP

Saudi women, in a first for the conservative kingdom, have paraded their camels in a beauty pageant for the prized “ships of the desert”.

“I hope today to reach a certain social standing, inshallah (God willing),” said Lamia al-Rashidi, 27, who took part in the weekend contest in the Rumah desert northeast of the capital Riyadh.

The event, part of the prestigious King Abdelaziz Festival, was previously a men-only affair.

“I’ve been interested in camels ever since I was little,” said Rashidi, whose family owns 40 camels.

“Once this event was opened to women, I decided to participate,” said the young woman, wearing a black face covering and with a colourful shawl over her shoulders.

The top five in the field of about 40 participants in the women’s event went home with total prize money of one million riyals (about US$260,000).

Saudi camel owner Lamiaa al-Rashidi is one of 32 women participating in camel competitions for the first time. Photo: AFP

The camels’ beauty is judged on several criteria, but the shape and size of the lips, neck and hump are the main attributes.

In December, several participants were disqualified because their animals had undergone Botox injections.

In a parade at the event on the red sand track of Rumah, women in black on horseback rode ahead of men in white robes on camels as male musicians, some with swords, danced to the beat of drums.

The oil-rich Gulf state adheres to a rigid interpretation of Islam, but since the rise to power of Crown Prince Mohammed bin Salman in 2017, some restrictions on women have been lifted as the country opens up with sweeping reforms.

Saudi Arabia is seeking to diversify its economy away from oil, investing heavily in the tourism, entertainment and sports sectors.

The shift has enabled women to get behind the wheel and take part in mixed-gender settings, even as a rigorous crackdown on dissent remains in place.

“Women have always been an integral part of Bedouin society. They owned and looked after camels,” said Mohammed al-Harbi, a manager of the festival.

Women’s participation was in keeping with “the historical heritage” of Saudi Arabia, he told Agence France-Presse.

Munira al-Mishkhas, another participant, chimed in: “Camels have been a part of us for a long time, but staging a contest for us (women) is a big step forward.”

The camels are judged mainly on the shape and size of their lips, neck and hump. Photo: AFP

Her proud father, a 35-year-old camel dealer who said he owns more than 200 beasts, was very pleased with the entrance of women.

“This will increase enthusiasm for the festival and increase the value of the camels,” said Enad bin Sultan, clad in traditional costume and red-and-white keffiyeh headdress.

The 40-day festival, which kicked off last month, is an annual Bedouin event that lures breeders from across the Gulf with total prize money of up to US$66 million.