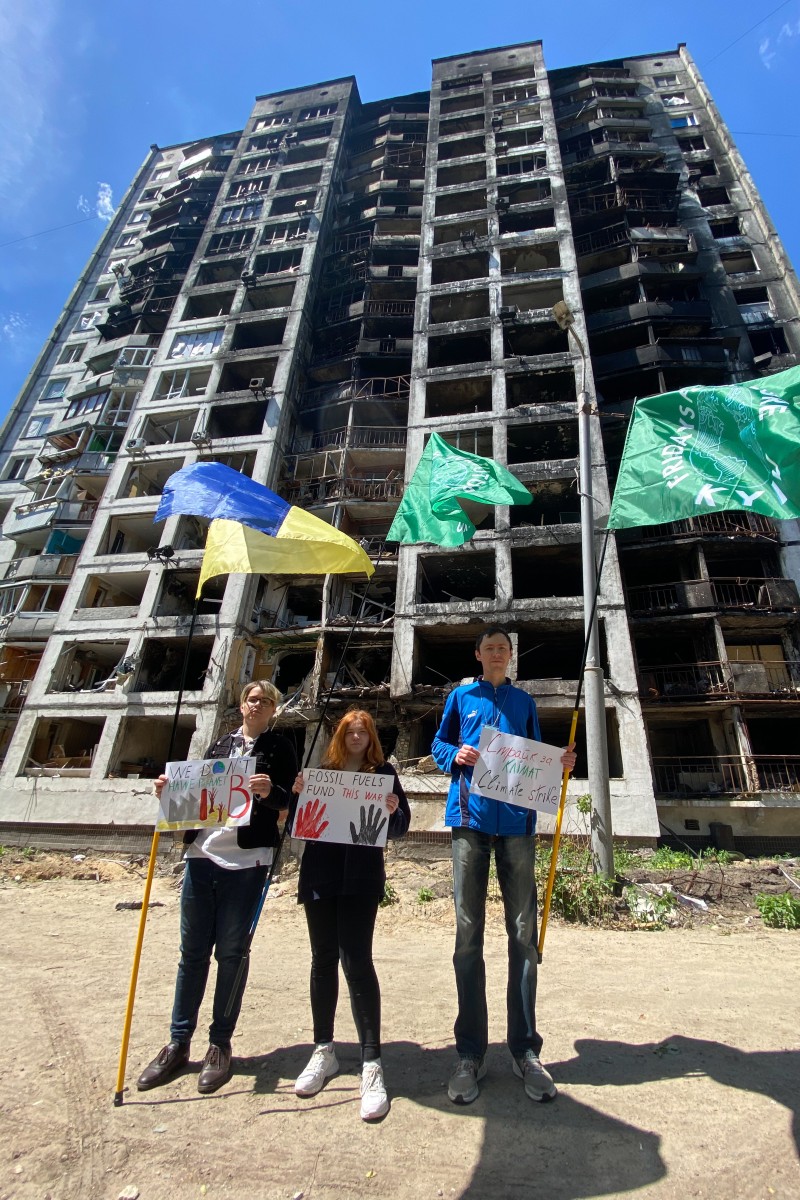 Peace on Earth: climate activists from Fridays for Future Ukraine on why fossil fuel reliance is tied to the war 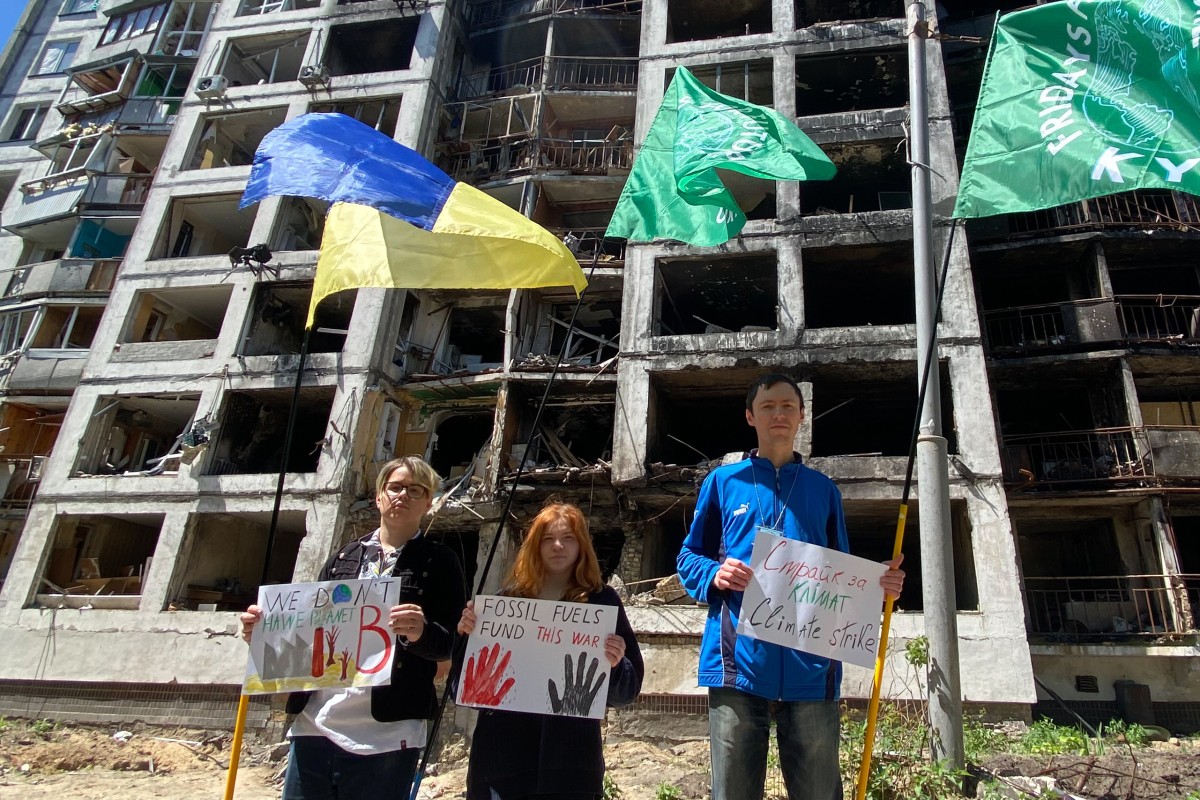 On April 28, climate activist Ihor Sumliennyi was sure he would enjoy a peaceful evening in his home in Kyiv, Ukraine’s capital city. After all, Russian troops had recently retreated from the area, and UN Secretary General Antonio Guterres was visiting.

Nevertheless, the piercing explosion of a cruise missile, fired from hundreds of kilometres away, disrupted his plans.

Within a few seconds, the 31-year-old and his family ran to the hallway where they usually hide during these perilous moments that have become commonplace amid Russia’s invasion of Ukraine. That night, they sought refuge at a bomb shelter as a nearby residential building had been hit by a bomb.

“It was really scary, but my home and my family were safe,” he said. “I’m in Ukraine because somebody has to stay here and tell the truth to the world. Somebody has to fight for our peace and our future. Even now, I hear rocket alarms outside.”

After 100 days of fighting, what’s happening with the Russian invasion of Ukraine?

For months, Sumliennyi, who is the regional coordinator of Fridays for Future Ukraine, has been on a mission to collect the debris left behind by weapons used in his country. He would show them to foreign activists and journalists so they could have a closer look at the war.

Over a video call with Young Post, the activist showed items from his grim collection, such as the broken parts of projectiles and cartridge cases from fired bullets.

“Through showing the debris to others, I believe that more people will get to understand how evil the war has been because it is not something [others] can easily envision in everyday life,” he added.

Ever since Russia’s invasion on February 24, thousands around the world have marched in solidarity with Ukraine through Fridays for Future, a youth-led climate movement, putting pressure on world leaders to end the war in Ukraine and the economy’s reliance on fossil fuels.

Sumliennyi explained how the climate crisis and the Russian invasion were connected.

“Russia uses money from selling gas, oil and coal to buy such weapons,” he said. “Our main goal is to urge people to stop financing this war.”

“Also it is to fight for a fast transition to renewable energy [and] fight against climate crises. I want all our countries to stop using fossil fuels by 2050,” he added. “[I] just want people to stop this war against our nature and start to live in harmony with our planet.”

The Ukrainian activist’s duties include coordinating with other Fridays for Future activists to organise climate strikes across Ukraine, and keeping in touch with foreign journalists to discuss the war.

With the continuing threat of Russian air attacks, Sumliennyi said bomb alarms would still go off two to three times a day. Twice a week, he takes refuge in the underground railway system or stays in a bomb shelter.

“Whoever wants to can take some sweets [and] cookies for little children. There is some food we can also take from volunteers,” he said, adding that people would often prepare bread, canned food, fresh fruits and home-cooked meals to share at the shelters.

Such is life for those who remain in Ukraine, and Sumliennyi said at least 10 Fridays for Future activists were still living in different parts of the country, with eight members of the group fleeing elsewhere to advocate for their home at an international level.

Among the ones who have left is Ilyess El Kortbi, who is a co-founder and board secretary of Fridays for Future Ukraine.

On the first day of the war, the 25-year-old was on a train heading to Kyiv for a peace-building youth conference when he learned about Russia’s invasion.

At a metro station in Kyiv, the Moroccan-Ukrainian activist recalled seeing an old man who was tuning into a live stream in which Russian President Vladimir Putin claimed that no civilians would be touched by the invasion.

“But when I arrived at my hotel in Kyiv, I heard the first air attack sirens,” El Kortbi recalled. “Later, in the national news I got to know that it was a Russian missile ... [heading towards] a civilian building.”

After leaving Kyiv on March 3, the activist sought refuge in the German city of Berlin. He took to Twitter to call for a global protest to end the war.

On March 25, the Fridays for Future movement called for demonstrations from Indonesia to Europe and the United States, with some linking their environmental message to calls for an end to the war in Ukraine.

Some 300 protests were planned in Germany, and El Kortbi spoke at a rally in Berlin.

“March 25 changed my life again, and now, I continue what I do ... because there is no peace when we still use fossil fuels,” he said.

Jule Pehnt, a climate justice activist based in Germany, was among the thousands at the protest in Berlin.

The 17-year-old spokeswoman for Fridays for Future Germany emphasised the importance of calling for world peace while also addressing climate issues.

“Fridays for Future was clear from the beginning that we will show solidarity with Ukrainians and take to the streets against this war,” she said.

“Not only because we stand against every violation of human rights, but also because we could see how years of politics and economics focusing on fossil fuels and profits have led to this war.”

As El Kortbi continues his advocacy in Germany, he is working with other Fridays for Future members to coordinate climate actions and speak up about the connections between the war and fossil fuels.

“I feel the duty to act and be loud – because at least I can help my friends,” he explained.

“I feel like I am now living with only one goal. It is doing anything possible for peace in my homeland.”

(of a sound) extremely high or loud.

A low-flying missile which is guided to its target by an on-board computer.

To seek a place providing safety or shelter.

An object propelled through the air, especially one thrown as a weapon.

The process or a period of changing from one state or condition to another.

a device for making a loud warning noise

broken or torn pieces of something larger