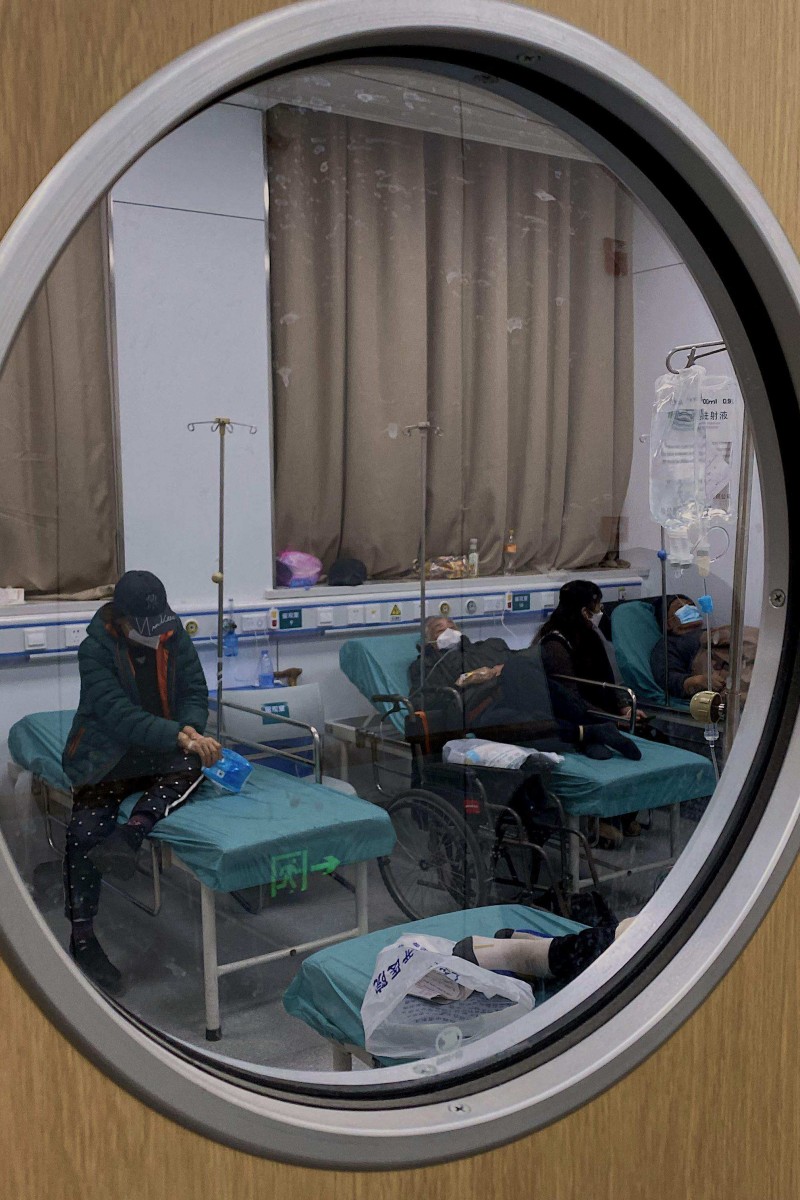 Cities across China have struggled with surging Covid-19 infections, resulting in a shortage of pharmaceuticals and overflowing hospital wards and crematoriums after Beijing suddenly dismantled its zero-Covid lockdown and testing regime. Photo: AFP

Beijing’s sudden pivot away from containing Covid-19 has caused jitters around the world, with the United States saying it may restrict travel from China following its decision to end mandatory quarantine for overseas arrivals.

Late on Monday, China scrapped quarantine for inbound travellers from January 8 onwards, dismantling the last remaining piece of its stringent zero-Covid policy and ending some of the world’s harshest border restrictions.

The move was greeted with jubilation by Chinese citizens, who rushed to book international flights, triggering a surge in ticket prices.

Hospitals and crematoriums across China continue to be overwhelmed by an influx of mostly elderly people.

Medical staff are “pretty much all” expected to continue working despite testing positive for the virus, one doctor said.

Medical workers attend to patients at a makeshift fever clinic inside a gymnasium amid a coronavirus outbreak in Fuzhou, Fujian province, China on December 28, 2022. Photo: cnsphoto via Reuters

Other countries have expressed concerns about the potential for new variants to emerge as China battles the world’s biggest surge in infections.

US officials said late Tuesday they were considering Covid entry restrictions on travellers from China, after countries including Japan and India introduced PCR testing on arrival for Chinese passengers.

“There are mounting concerns in the international community on the ongoing Covid-19 surges in China and the lack of transparent data, including viral genomic sequence data, being reported from the PRC,” the US officials said, referring to the People’s Republic of China.

The United States is “considering taking similar steps” to countries such as Japan and Malaysia, they added.

Taiwan, a self-ruled island that China claims as its own, said Wednesday that it would also screen travellers from the mainland for the virus.

China’s loosening of measures effectively brought the curtain down on a zero-Covid regime of mass testing, lockdowns and long quarantines that has stalled its economy and triggered large-scale nationwide protests.

People burn offerings for the deceased near a funeral home during a surge of Covid-19 cases in Chengdu, Sichuan province, China on December 28, 2022. Photo: Reuters

All passengers arriving in China have had to undergo mandatory centralised quarantine since March 2020. The period of isolation fell from three weeks to one week in June, and to five days last month.

The end of that rule in January will also see Covid-19 downgraded to a Class B infectious disease, allowing authorities to adopt looser controls.

Chinese immigration authorities said on Tuesday they will resume issuing passports for tourism purposes from January 8, after years of strict exit controls.

The winter surge comes ahead of major public holidays next month in which hundreds of millions of people are expected to travel to their hometowns to reunite with relatives.

Chinese authorities have said the scale of the outbreak is now “impossible” to track and narrowed the criteria for defining Covid deaths.

The US-developed treatment was briefly available on e-commerce platform JD.com and delivery platform Meituan in the past few days before both ran out of stock.