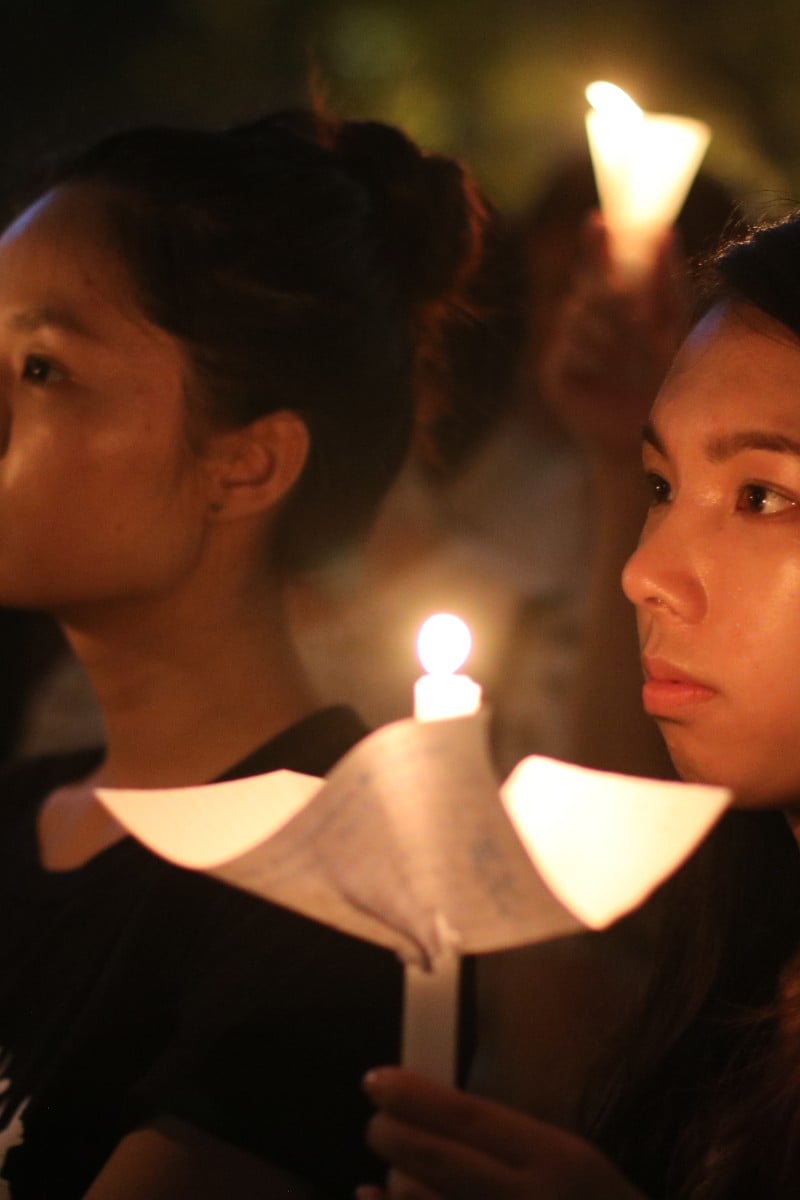 June 4 vigil in Hong Kong attracts more than 180,000 to mark 30 years since the Tiananmen Square crackdown 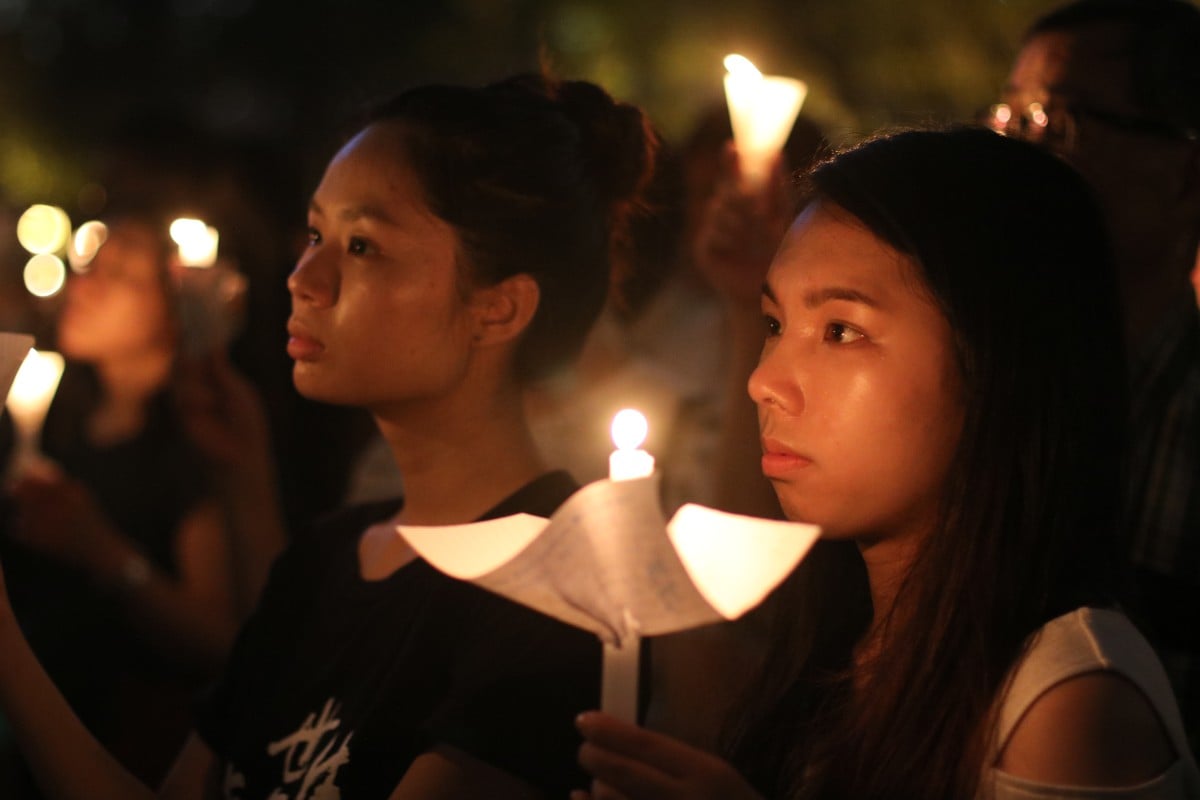 The candle light vigil is an annual event in Hong Kong to commemorate the deaths of those who fought for democracy in Beijing in 1989.

More than 180,000 people gathered at the candlelight vigil in Victoria Park to mark the 30th anniversary of Tiananmen Square crackdown tonight, say organisers. If confirmed, tonight’s attendance would exceed the record set in 2012 and 2014.

It has been 30 years since the military crackdown on students protesting for democracy on Tiananmen Square in Beijing ended in bloodshed. Today, the tragedy is only commemorated in Hong Kong and Taiwan, as the central government continues to cleanse any mention of the event from the media.

The Hong Kong vigil officially began at about 8.00pm as participants raised their candles whilst the Chinese patriotic song Blood-stained Glory played. Twenty minutes later, all six football pitches at the park were fully packed. Latecomers were advised to go to the grass field on the side instead. Generally the football pitches combined can hold more than 100,000 people.

Samuel Ng Chun-yi, a 12-year-old student at Ying Wa Primary School was there with his mother. He told Young Post, “This memory should be preserved and passed down to the next generation. The Chinese government likes to use lies to cover up the truth.” His mother added that this was the second time Samuel had attended the vigil. She wanted him to know the pain and suffering that had taken place at Tiananmen.

Tonight was the first time two mainland students, who have recently moved to Hong Kong, attended the vigil. Both of them feared it would also be their last opportunity.

“I’ve always known about the incident, but I didn’t have any chance to attend events similar to the vigil [back when I was still living on the mainland,” said Sherry Lau, 18. “Since I can join the vigil in Hong Kong this year, and knowing that the city’s new extradition law is likely to pass soon, I fear that similar gatherings will no longer be permitted here in the future. I really want to help fight for democracy while I still can,” added the student from Delia Memorial School (Hip Wo).

Her schoolmate Jay Jiang, 17, shared similar sentiments. “Seeing that Hong Kong is slowly losing its autonomy, I am also worried that this is the last year the vigil will be allowed in the city. That’s why I felt I had to be here tonight.”

Victoria Park was covered in a sea of lights to mark the 30th anniversary sine the Tiananmen Square crackdown.
Photo: Joanne Ma/SCMP

Many people said they had been motivated to attend this year because of the looming extradition bill, which, if passed, would see suspects sent to the mainland to face trial for crimes. Given the huge differences between the Hong Kong legal system and the mainland legal system, many fear the central government will use the new law to silence critics in Hong Kong, which has so far enjoyed freedom of speech and press, rights not extended on the mainland.

Jay admitted she didn’t think the students at Tiananmen would be vindicated any time soon, but it was important for her to stand up for the victims, many of whom were just innocent bystanders watching the protests when the military began firing live ammunition into the crowds.

“I think more people should know more about the June 4 incident, and that it should never be forgotten,” added Sherry, who said the mysterious disappearance of the Tienanmen Mothers recently was also a reason why she wanted to attend the vigil.

Ahead of today’s anniversary, activists in the mainland were arrested, and the government tightened internet security, so that foreigners were unable to post to their usual social media platforms.

Other than the conventional song choices, the vigil this year featured two pieces of work by mainland singer Li Zhi, whose lyrics are highly critical of the central government. A music video, broadcast at the start of the event showed Li’s song The Square.

Along with images of former Hong Kong leaders downplaying June 4 and Hong Kong people taking to the streets for democracy, Li sings “You will be educated into a bad person, an animal that won’t save the dying ones”.

At 8.45pm, Liane Lee, an eyewitness to the crackdown 30 years ago shared her personal experiences on stage. She recalled most of the students then were determined to stay at the Square, because some had already sacrificed their lives for democracy, they simply could not give up.

“There were people urging Hong Kong students to get into ambulances [to flee the Square] but we insisted on staying. A doctor held my hand and said, “Listen to me, you have to get in the ambulance and leave. Tell everyone how our government treated us.”

She added, “For all these years, I dare not forget a single detail of that day.”

Later, veteran journalist Mak Ying-ting also shared that she had seen soldiers firing on civilians on that fateful night. She said the central government was dismissing the truth, as she criticised Defence Minister Wei Fenghe for saying recently that the crackdown was merely “political turmoil”.  While the words were an official softening of the government’s tone on the protestors, Mak felt it detracted from the horror of the event.

“Was it right to open fire on civilians?” she asked on stage, and was met with a resounding “NO” from the audience. She also accused central authorities of trying to rewrite history by under-reporting the number of people who died.

In between the sharing on stage, the crowd chanted slogans such as “never forget June 4”, “free those who fight for democracy”, “allow justice to prevail for those who have sacrificed” and “end the totalitarian government of China”.

The vigil ended at 10pm, overflowing MTR stations meant they faced a delay on their way home. Meanwhile, a few hundred marched to the liaison office, calling on the central government to “admit the atrocities committed”. “Shame on political crackdown! Release all political prisoners and human rights lawyers!” they demanded.

Hongkongers stand in solidarity 30 years since the Tiananmen Square crackdown