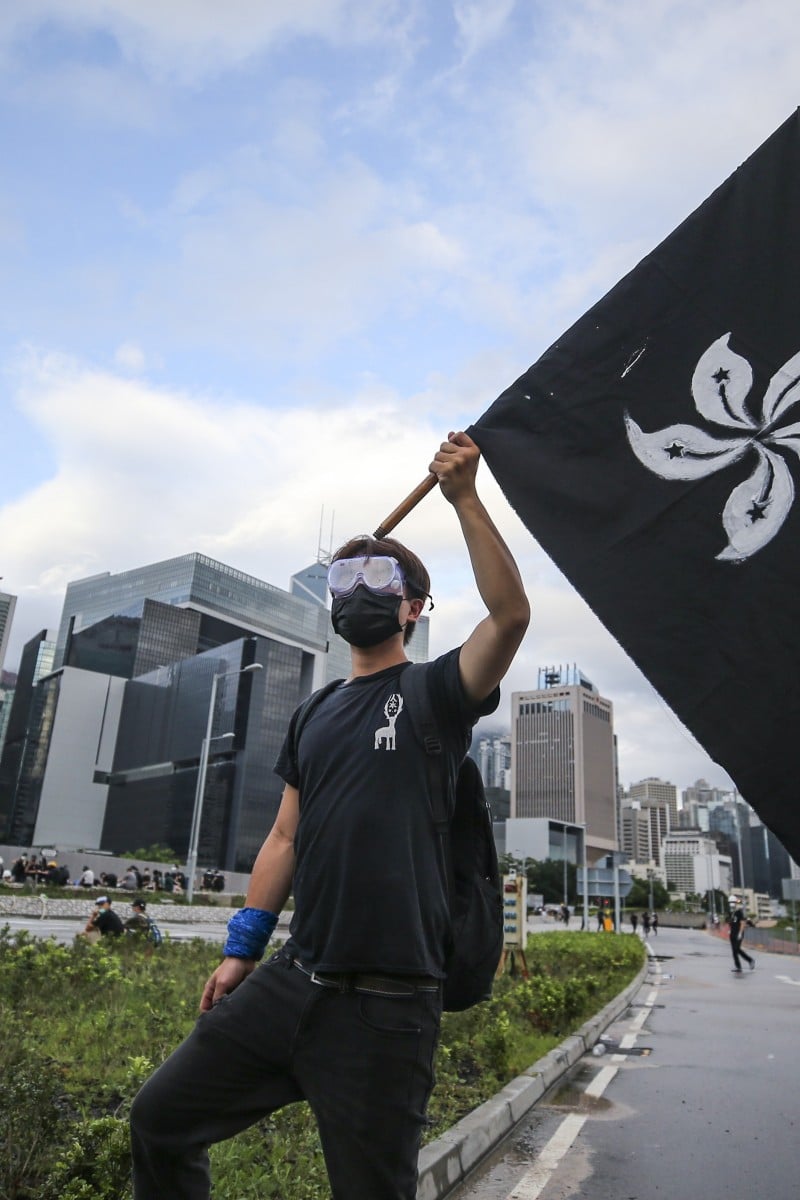 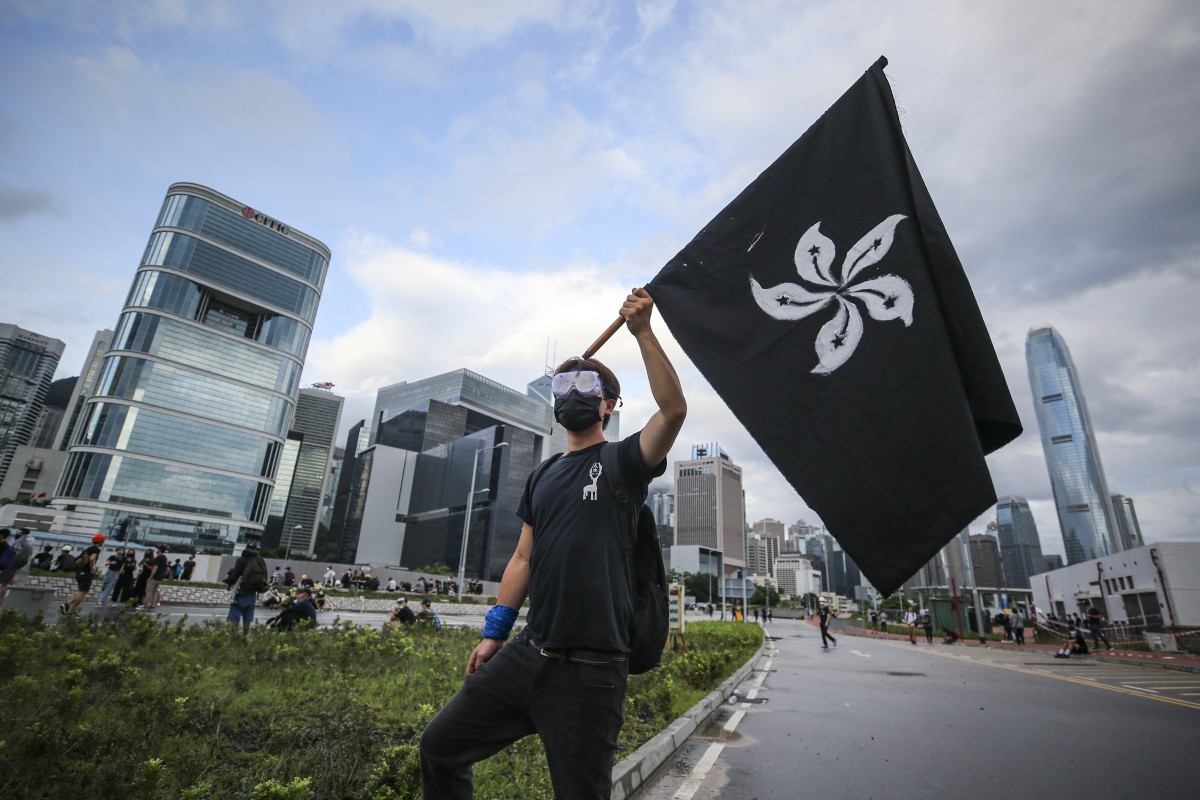 Protesters carrying umbrellas march against the extradition bill outside the Legislative Council Complex in Tamar on the 22nd anniversary of Hong Kong's handover from Britain to China. 01JUL19 SCMP / Winson Wong

Organisers of this year’s July 1 march, the Civil Human Rights Front, say that 550,000 protesters attended the rally yesterday, while police estimated the turnout at 190,000.

The peaceful march proceeded from Victoria Park in Causeway Bay around 3.30pm, and was originally scheduled to end at government headquarters in Admiralty. However, the ending point of the march was diverted to Chater Garden to avoid a smaller group of protesters who were besieging the Legislative Council building.

In line with the recent anti-extradition bill protests, three of which were organised by the Front earlier this month, the rally this year was themed “No Extradition to China” and “Carrie Lam Step Down”. The now-suspended bill, would have allowed Hong Kong to send suspended criminals to jurisdictions which they don’t have an extradition agreement with, including mainland China.

Hong Kong extradition law: What happened at Legco on July 1 when protesters stormed the complex?

As suggested by the organisers, most protesters were dressed in black despite the sweltering heat. Many chanted slogans such as “Free Hong Kong”, “Democracynow”, and “Carrie Lam, down, down, down”. Some were holding protest signs with messages including “Stand up for Hong Kong” and “Have faith in the youth. Have faith in the people [of Hong Kong]”.

A few brought national flags of other countries, such as the United States and Britain, and held them up during the rally.

Ahead of the chaos, we spoke to some of the younger protesters to find out why they were participating. A Lingnan University student surnamed Au told Young Post that he joined the July 1 march because he was dissatisfied with the Hong Kong government’s failure to take into account the will of the people. He said he joined the first anti-extradition bill protests on June 9, where the Front estimated a turnout of 1 million people.

This years march was one of the biggest since the handover.
Photo: Martin Chan/SCMP

“Although the extradition treaty is a common agreement between a number of countries, [our] opposition to the bill shows how little trust we have in the Hong Kong government,” the 19-year-old said.

“When we have a government that does not respond to or care about the voice of so many Hongkongers, the future of Hong Kong in 30 years will be unimaginable, especially if people are still unwilling to step up to address the issue,” he added.

Despite his presence at the July 1 march, he admitted having doubts about the effectiveness of peaceful protests, given that the government has not listened to the demands of Hongkongers despite the massive turnout of the anti-extradition bill protests on June 9 and 16.

“My family is against the bill, but ... they are unwilling to take part in the protests to voice their opinions,” he added. “I tried to explain to them that if everyone acts in that way, no one will be willing to step up and in the end we won’t be able to achieve what we want.”

Au also believes that Hongkongers’ fight for freedom and democracy will continue for a long time, perhaps even for “decades”. “I hope that when my future children are my age, they will be willing to step up and speak out against the government. But what I wish for the most is that Hong Kong will eventually become a democratic city.”

We also spoke to three 16-year-olds from Pentecostal School who were taking part in the rally to demonstrate against the anti-extradition bill.

“In the previous two demonstrations [on June 9 and June 16], we expressed our wish to have the bill withdrawn, only to be ignored by Carrie Lam completely,” said one of the students, surnamed Fung. “Passing the law will threaten our human rights, freedom of speech and religion. That’s why we keep showing up at rallies to protest against the bill.”

Police and citizen tensions have been rising over the past weeks.
Photo: K. Y. Cheng/SCMP

His classmate, surnamed Fong, agreed. “I fear if we don’t speak up today, the ‘One Country, Two Systems’ principle will be undermined [before it officially expires],” he said, while referring to the fact that part of the Central Harbourfront had recently been given to the People’s Liberation Army (PLA).

To support his fellow protesters, Fung went to Legco rather than his school for an exam on June 12.

“I was really shocked to see the police’s brutal treatment of the press and the protesters, most of whom were just demonstrating peacefully,” he said. He added that his school was very understanding about the cause of his absence, and even arranged a make-up test for him.

“I hope that other student organisations will have the chance to communicate with the government or Carrie Lam,” said another student surnamed Chiu. He was also disheartened by the police’s use of force. “I saw some Hong Kong police being really violent towards the protesters, such as releasing tear gas bombs and using pepper spray. They also used rubber bag bullets against protesters who were posing no danger at all.”