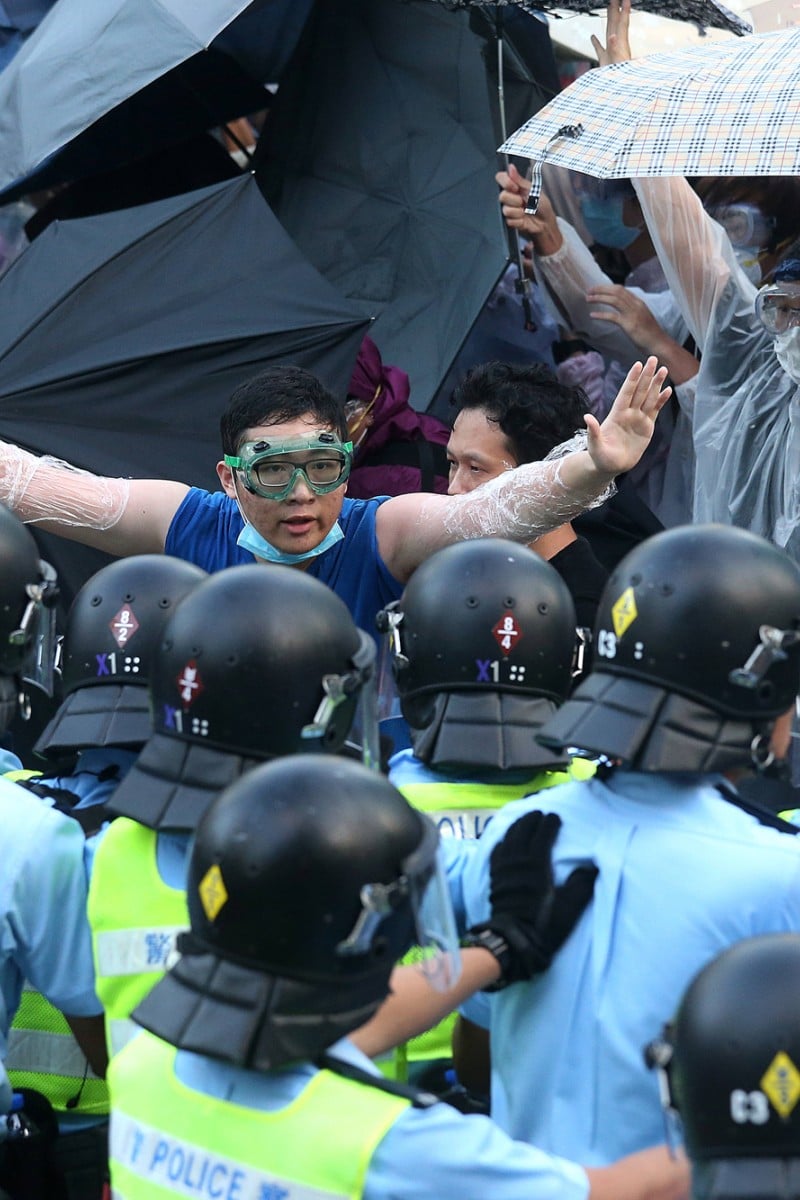 Young Post's American reporter Ariel Conant has lived in Hong Kong for more three years. And while she's seen protests in this city, the scale of Occupy Central on Sunday night was like nothing she'd seen before. Reporting live on the ground in Admiralty, she saw violence, compassion, and determination; all through the painful haze of a teargas attack. 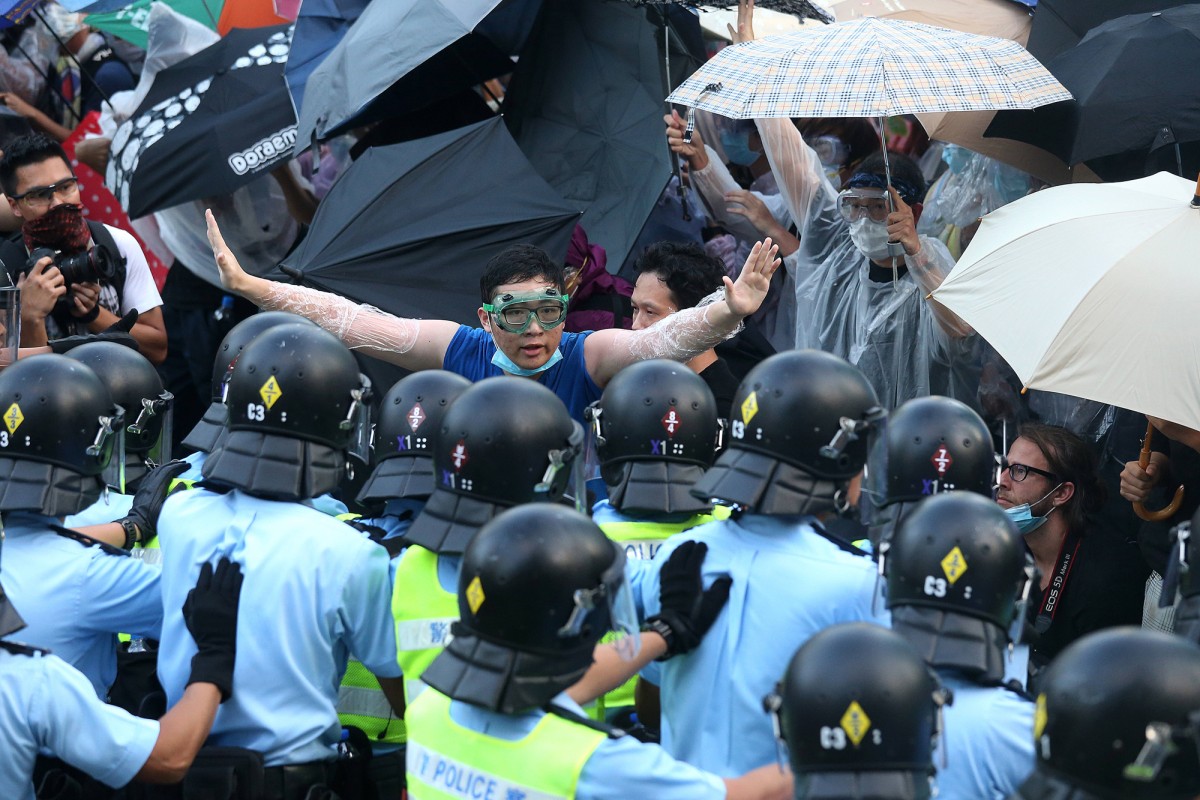 Protesters and police officers on Connaught Road Central in Admiralty.

One thing that always struck me about living in Hong Kong was how safe it is here. There's very little crime, almost no violence, and the citizens are well-behaved even when protesting. And Hongkongers protest a lot. Almost every weekend there seems to be a rally or protest or march, but they're always organised and peaceful, and everything gets cleaned up without a fuss, and the police are there merely as a formality.

But that was not the Hong Kong I saw last night.

I headed to Admiralty - an area close to the financial district of Hong Kong - at around 6.30pm yesterday to take my shift for Young Post coverage of the protests. I had been at the protests on Saturday afternoon at Tamar Park, which is a short walk from Admiralty. But since Occupy Central was announced at 1.38am early Sunday, the crowd of protesters had swelled to uncountable numbers. As I boarded the MTR in Sheung Wan, hoping Admiralty was still open, I got a text.

Teargas had been used on the protesters.

I had a scarf to protect my face, and a large waterbottle. I was sure I would be fine. I was surprised the police had used teargas. I hadn't heard of that happening before in Hong Kong.

The Admiralty MTR was still open when I got there, packed with protesters taking a break, dressed in raincoats with plastic food wrap around their faces to protect against teargas. I made my way out of Exit A and up to street level. Blue-uniform police, with no riot gear, were guarding entrances and the barricades, but made no efforts to stop people from climbing over to join the massive crowd. I climbed over, and made my way through the sea of protesters.

I ended up under the footbridge that spans Connaught Road and continues over Civic Square, where the student boycott protesters had been stationed just the day before. Now Civic Square was empty, and all the protesters were confined to the six lanes of Connaught Road. Along the edge of this normally busy highway, armed police with gas masks and riot shields faced off with angry protesters who shouted slogans through megaphones at them.

Suddenly, the crowd broke. People started scattering as a force of heavily armed police in green fatigues came rushing through the busy road. They forcefully thrusted aside or knocked down any protesters standing in their way, and cut through the crowd of unarmed protesters, mostly students. Once they reached the point under the bridge before Civic Square, they started firing teargas.

I had never experienced teargas. I wrapped my scarf tightly around my face, and tried to snap photos as protesters ran by me, coughing and stumbling blindly. Then the gas hit me. It burned my face and eyes, and I suddenly couldn't breathe. I turned and started to run, trying to find a gasp of clear air. I saw protesters doubled over, coughing and vomiting from the smoke. But everyone was helping everyone else. As I ran, at least three people thrust water bottles into my hands, and everyone who fell was immediately picked up by their fellow protesters and helped to safety. Once I had caught my breath (and taken a post-teargas selfie), I headed back to see what the police were doing.

The green-fatigued riot force had cleared the area in the eastbound lane of Connaught Road directly under the bridge. Protesters were stumbling back, arms raised high in the air to show their surrender, and that they were unarmed and had peaceful intentions. I kept my arms high, but moved to the front and to the side, trying to keep my press badge as visible as possible. I was at the front of the line, trying to get a good picture of the police facing off against the protesters when the police fired the next round of teargas.

I wasn't sure what it was at first, as I hadn't been as close to the previous one. When they first fired, I thought it was a flare. The cannister shot past my left leg in a hot blaze of light, and hit the pavement not five feet (1.5m) from where I was standing. When I saw the smoke starting to flow out, I knew I was in trouble. I clutched my scarf as tightly as I could around my face, squeezed my eyes closed, turned and ran as fast as I could.

As I ran, protesters grabbed my arms, poured water on my face, and helped me along. But I was coughing too hard. I fell over and vomited from the diaphragm spasms the gas was causing. But I wasn't down for long. A few protesters pulled me up and got me to a safe spot, thrusting water into my hands and splashing it onto my face. My skin was burning, and I still couldn't see, but we were far enough away now that we could safely sit and recover. Everyone was taking care of each other as best they could.

Before long, we all started to drift back down the road, back into the throng of protesters. The police were still holding their ground in the cleared area under the bridge, but no more teargas was used. They were surrounded on three sides by protesters, and over the course of the night, the crowd only continued to increase. It was endless. Even once I had managed to get onto the overhead footbridge at Admiralty Centre to get an aerial view, I couldn't see an end to the crowd in either direction.

Later on, things settled down more. The green-fatigued police retreated from the section of Connaught Road they had cleared, which protesters immediately filled. People started sitting in groups, settling in for the night. While there were reports of more teargas and violence near Statue Square in neighbouring Central, things at Admiralty had calmed considerably.

In my years of living in Hong Kong, I have never seen anything like last night, nor did I ever think it would be possible. This wasn't the Hong Kong I knew. These were peaceful, student protesters. No one in the crowd was armed with anything more dangerous than a bottle of water or umbrella. Watching that canister shoot past my leg, and feeling my lungs burning was an experience I never thought I'd have, and would never want to repeat. But the camaraderie in the crowd, and the support everyone gave to each other gave me hope that the Hong Kong I know is still there.