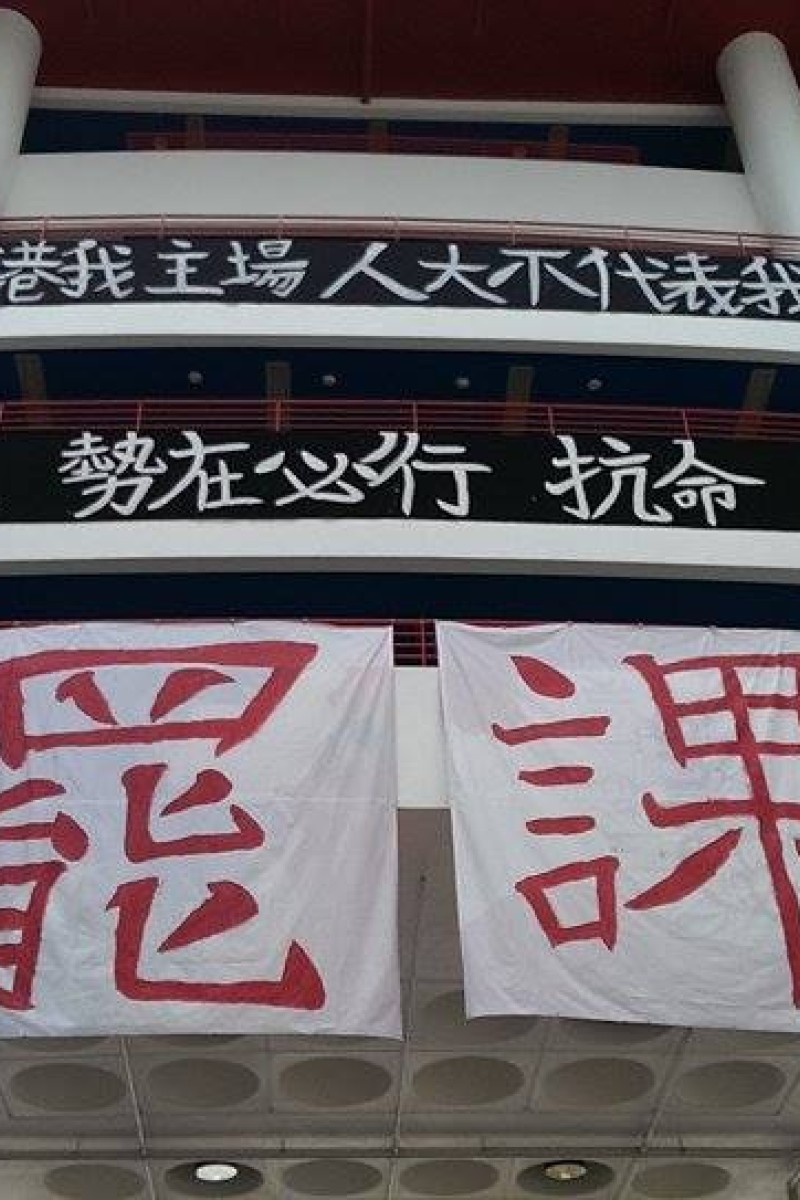 Not every student agrees with Occupy Central and the actions of those who participated in the protests over the weekend. 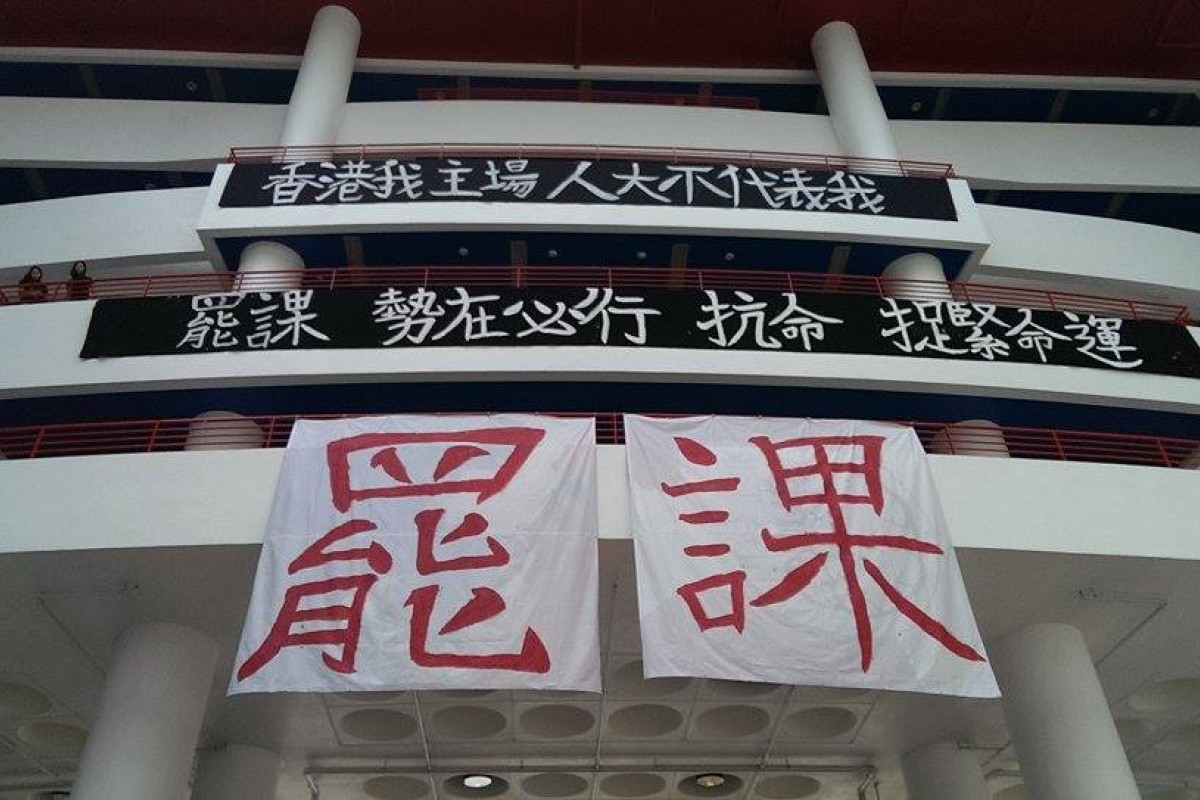 Banners for class boycott displayed in the atrium of The Hong Kong University of Science and Technology.

If last week's class boycotts and this weekend's Occupy Central is any indication, Hong Kong students are more politically outspoken than ever before. While the position of those who were part of the protests in Admiralty, Central, Causeway Bay and Mong Kok is quite clear, there are countless other students whose view differ from that of their peers who are standing their ground by continuing boycotting classes this week. Some are in full support of those occupying various areas of Hong Kong, while others cannot reconcile their values with the actions of their peers.

Kate Ng, 19, a second year politics student at The University of Hong Kong has been following the events closely, and says the police force deployed to contain the situation was unjust and excessive.

"One Police Tactical Unit (PTU) was equipped with 80 teargas bullets of teargas. There was one moment when the police fired five teargas bullets into the crowd at Edinburg Place in Central within five minutes," Ng said. "And if you were beaten and injured by police wielding batons, you can’t go to the hospital because your injury assessment report will actually become a piece of evidence that you engaged in 'illegal civic disobedience'. Hong Kong people did not set the city on fire, they did not occupy any administrative buildings, and they did not kill anyone in the protests. Yet they were treated so violently."

Ng will not be participating in the class boycotts, but will speak in front of her class about the violence used against peaceful protesters yesterday.

"Some may say I am wrong to still go to class under such turmoil in Hong Kong, but I truly believe everyone has their role in contributing to the movement."

Similarly, Sharon Lee, 18, a first year student at HKU and Harry Cheng, 18, of The Hong Kong University of Science and Technology feel the police overstepped the line.

"Although I was not a supporter of Occupy Central when it was first proposed, I think that the actions of the Hong Kong government and the violence of the police force have made it impossible for citizens to not be furious," said Lee. "Our protectors are attacking innocent, unarmed and righteous citizens with weapons. And from the response of citizens occupying Mong Kok, Causeway Bay and other places, I think it is clear Hong Kong people are determined to start a revolution."

"The police using tear gas and rubber bullet against students, unarmed citizen and even patients was truly unacceptable," Cheng said, "(What I saw of) Occupy Central yesterday was wholeheartedly disappointing and heartbreaking."

Talk in schools on what happened yesterday also varied from buzzing discussions to near silence.

"Occupy Central is all people discussed in class today," said Joy Pamnani, a form five student at PLK Ngan Po Ling College. "I support the protesteers' fight for genuine universal suffrage as long as violence is minimised. And we can see that violence had been kept to a minimum as no one was killed. Protestors even left a sign saying sorry to the police apologising for inconvenience caused; is that politeness or what?"

Meanwhile, Nastassja Chan, 17, of Shatin College said, "nothing much has been said about protesters in our school." She adds that "even though I do sympathise with the protesters for fighting for what they want, unlike many others, I'm not hating and bashing on the policemen."

Nastassja is mindful that the media is often one-sided, and while there are many videos showing police using teargas, pepper spray or physical violence, there is a lack of videos showing violence protesters used against the police, too.

"In the end, the police is following orders because that is their job," said Nastassja, "the situation had become so chaotic they had to use violence in return. I believe that violence is never the answer, but why are we blaming everything on the police?"

She adds that she has friends whose parents are on the police force, and that her friends' fathers had been called to work at midnight. Some even ended up in hospital.

"Every argument has two sides," Nastassja stresses, "and personally, I think that some of the actions of the protestors are a bit too drastic. In the end, I just hope both sides will gain an understanding and stop the protest. Because unless one side stops what they're going first, the battle will just go on."

A morning assembly in City University of Hong Kong, with many students choosing to skip class
Photo: Kum Cheuk Yu

Others, like Olivia Lam, 16, of Li Po Chun United World College also feels both sides have responsibilities to own up to. And her school was buzzing with conversation.

"I always thought of our school to be isolated from rest of the Hong Kong, so I was very surprised yesterday when our classmates, including overseas students, all had strong opinions (about Occupy Central) and there were hot debates going on everywhere on the campus these last few days."

Further, while she feels for them, Olivia feels the protesters are doing more harm than good.

"I disagree with the Occupy Central movement. I believe the side effects of the movement will hamper the rally for democracy in Hong Kong," Olivia said. "The more aggressive the protesters get, the less possible it is for Central Government to grant them their wish. However, I also empathise with the protesters. I agree that we are under increasing influence from Beijing, but what can we do? "Sovereignty is not given, it is taken." You will never see a leader willingly give up its power to other people.

"Moreover, the police shouldn't have used tear gas on protesters," Olivia stressed. "If no one paid them attention, there won't have been more and more people joining Occupy Central. To sum up, I am not supporting anyone. We're now in a deadlock. Neither Hong Kong citizens nor the Hong Kong or central governments can come up with a solution to the crisis we're facing now."

Indeed, not everyone is entire for or against the movement, and not everyone is planning on being a part of it. But it does seem most students intend on playing a role in some way.

"Nobody at our school is on a strike," said Theros Wong, 17, of Li Po Chun United World College. "But we do have students who are going to Central after school on a voluntary basis."

Theros also said that while none of his peers are going on strike, they are encouraged to wear black during school breaks to show their stance against the use of violence on students.

With all the buzz, whether for or against Occupy Central, it's no surprise news of the weekend's events also reached across the border onto mainland China.

"Occupy Central, as of yesterday, has been an extremely common topic of conversation," revealed Karis Tao, 14, of Chinese International School Hangzhou. "And although we are not in Hong Kong, most of us are from Hong Kong and we have been following the city's events closely. Our community is planning to take action and come up with a way that we can all help, and we all send well wishes to everyone in Hong Kong. I believe that the protest was purely peaceful yet everything is now blown into chaos and we're all just wishing that there'll be no bloodshed and each person in Hong Kong will stay safe and well."