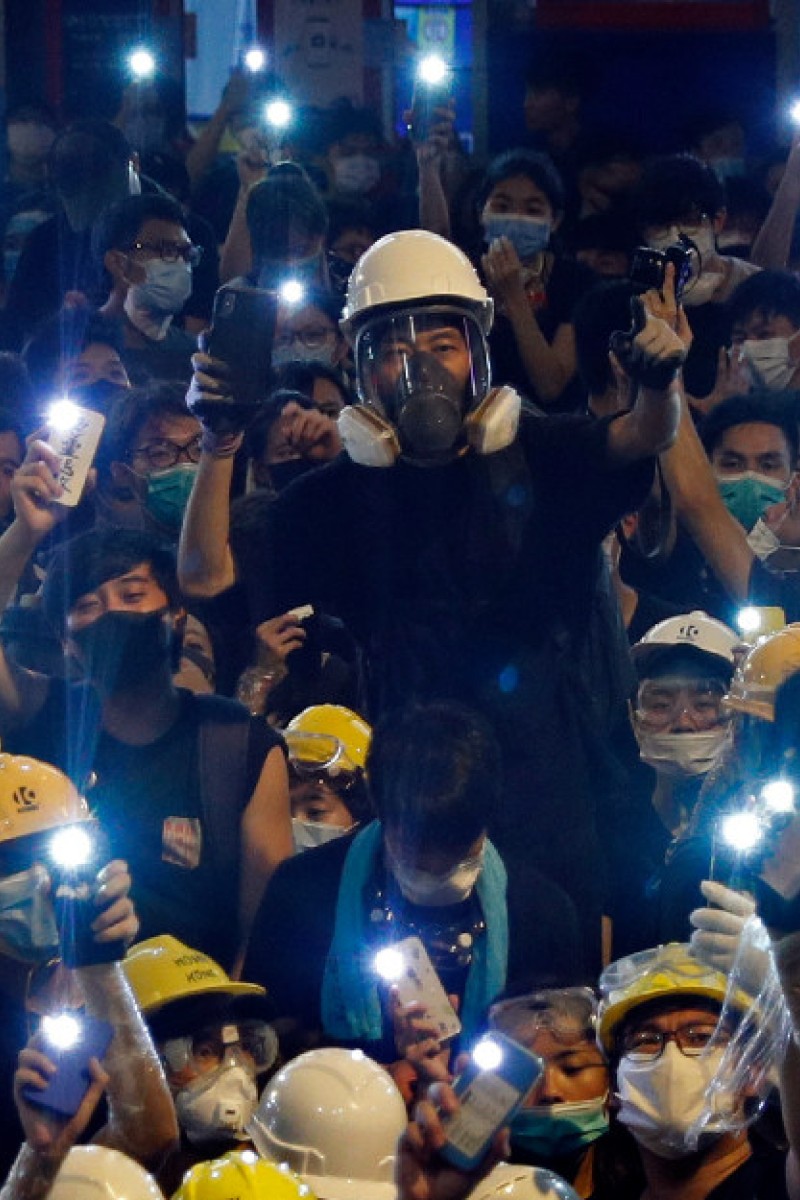 Hong Kong protests explained: A guide to the key words you see in the news

A glossary of the common terms related to the demonstrations, from extradition law and tear gas to rioting As the protests enter their third month, it may be helpful to have a guide to key terms you keep reading in the news.

There have been so many news articles about the protests over the last few months, and it may be difficult to keep up with some of the terms they mention. What exactly is rioting? What's martial law? We've compiled a glossary of some of the most commonly-mentioned words in relation to the anti-government protests.

To legally take someone into your care. Currently, police can detain (keep) a person for 48 hours without charging them with a crime. After that, they must request permission from a court judge to keep the person for longer.

The temporary release of an accused person awaiting trial. This usually involves paying an amount of money and guaranteeing their appearance in court. Limits may also be placed on the person’s freedom, such as the surrender of travel documents (like a passport) and the requirement to report to the police station at regular intervals.

Also called a bean bag round, this consists of a small fabric “pillow” filled with a lead shot. When it is fired, it spreads out and distributes the impact over a space of about six square centimeters. It is fired from a normal shotgun that has usually been modified to have yellow, green or orange markings that show it is not filled with normal bullets.

The act of refusing to buy a product or take part in something as part of a protest.

In Hong Kong, school strikes (or class boycotts) have been taking place in opposition to the extradition bill, with students joining in protest actions such as forming human chains.

The refusal to obey certain laws or fulfill certain obligations as a form of political protest. Generally, it refers to peaceful resistance and not violent protest.

The front is an alliance of various non-government organisations and political groups which mainly provides a platform for communication. They regularly hold marches, such as the 1 July pro-democracy marches every year, and the more recent million person marches against the extradition bill.

To reveal the private information of an individual, such as their address and phone number.

According to the Privacy Commissioner for Personal Data, there have been over 600 cases of cyberbullying and leaked personal data in Hong Kong since June. Police have also said the private data of over 1,800 officers and their families have been published online.

To confer on the Chief Executive in Council power to make regulations on occasions of emergency or public danger.  - Cap. 241 Emergency Regulations Ordinance

Also called a state of emergency or martial law, this set of laws allows the Chief Executive to make laws without putting them to the Legislative Council, and the government could then arrest and detain people, censor media and amend or suspend any laws already in operation.

Rumors of emergency law being put into action have caused a great deal of concern in society, with many business leaders saying it would have a huge impact on the economic environment of Hong Kong.

Extradition is the transfer of a person accused or guilty of a crime in one country to another country. As Hong Kong is not an independent country, the correct term for the act would be ‘rendition’.

The core demands of the protesters. At the moment, the government has pledged to formally withdraw the bill after three months of increasingly violent stree protests.

In protests, ‘gear’ refers to protective equipment for protesters, such as airtight goggles and filtration masks for tear gas and helmets.

Without permission from the police, a gathering of three or more people can be considered an illegal assembly if they intend or are likely to cause a breach of the peace.

Also known as a court order, it is a legal order that forces or forbids a party from doing or not doing something.

In Hong Kong, injunctions have been used to force protesters off roads during the Umbrella Movement/Occupy Central, and to stop protest activities at the Airport and in the MTR.

The anti-extradition bill movement has so far been leaderless, with protesters insisting that no single person or group that can represent all people. Instead, an agreement has formed based on five demands, with no one person stepping forward as a negotiator.

Letter of no objection

While Hong Kong citizens have the right and freedom to assemble, demonstrate and hold processions, the right is limited by the maintenance of public safety and order. As such, to hold a legal gathering, the police must be informed of the intention to hold such meetings, and they must not object to such meetings.

The ‘Lono’ is thus written proof that the police have allowed the gathering or procession to go ahead legally.

A local forum, similar to Reddit, frequented by protesters. Some use it to plan activities and spread pro-protest messages.

While pepper balls are fired from a gun, pepper spray is sprayed from a can. Both contain a powdered chemical that irriates the eyes and nose.

There is a set of police general orders governing police conduct, some of which are available to the public. Sections available include guidance on police arrest procedures and complaints against police. However, the force has been criticised for refusing to disclose the guidelines on the use of force.

Under this ordinance, 10 or more people gathering in any public place is enough to count as a public gathering, while a procession specifies an “organisation for a common purpose”.

To consolidate and amend the law relating to the maintenance of public order, the control of organisations, meetings, processions, places, vessels and aircraft, unlawful assemblies and riots and matters incidental thereto or connected therewith. - Cap. 245, Public order ordinance

Many of the crimes and procedures cited in recent events stem from this chapter in Hong Kong law, including the exact definition and precise exemptions of the law, and things like what counts as an offensive weapon.

If any member of the gathering actually causes a breach of the peace, it means the assembly is a riot and the people involved are “riotously assembled”

While they can be fired from normal guns, rubber bullets differ from normal ones in the sense that they are made from or coated in rubber and are not meant to be lethal. They are generally used in crowd control situations. Though they are not as deadly as real bullets, they can still cause serious harm – and even cause people to lose an eye.

This jail in Sheung Shui, close to the Chinese border, is generally used to house illegal immigrants, but has recently been used to house protesters. This has attracted criticism, as many say it is unnecessarily far from the places of arrest and causes difficulties for families and lawyers who wish to find the detained person.

A riot control weapon, intended to be non-lethal, which is fired from a grenade launcher and meant to confuse or temporarily disable its target. It is bullet-shaped, with a foam rubber nose and a plastic body. If shot at a distance shorter than 10 metres, injuries to a targeted person could be fatal.

Tear gas is a chemical weapon that stimulates the eyes to produce tears and can cause severe eye and respiratory pain and skin irritation. It has been a common sight at protests in Hong Kong over the last three months. It’s important to dump water on any areas of the body affected by tear gas, as well as to dispose of any clothing that was exposed to it.

A messenger app with relatively secure encryption used by protesters to communicate and coordinate protests and non-cooperative movements.

Triads is a term for organised crime societies in Chinese populations similar to the mafia or mobsters. The Yuen Long attacks on 21 July were believed to have been committed by triad members.

A major complaint against the police by legislators and protesters has been the lack of identification marks on police. In theory, officers should identify themselves before making arrests and wear their warrant cards. However, riot control officers and regular officers have been photographed hiding their badges and registration numbers. The police have explained the numbers may have fallen off, and that they need to protect the personal information of officers.