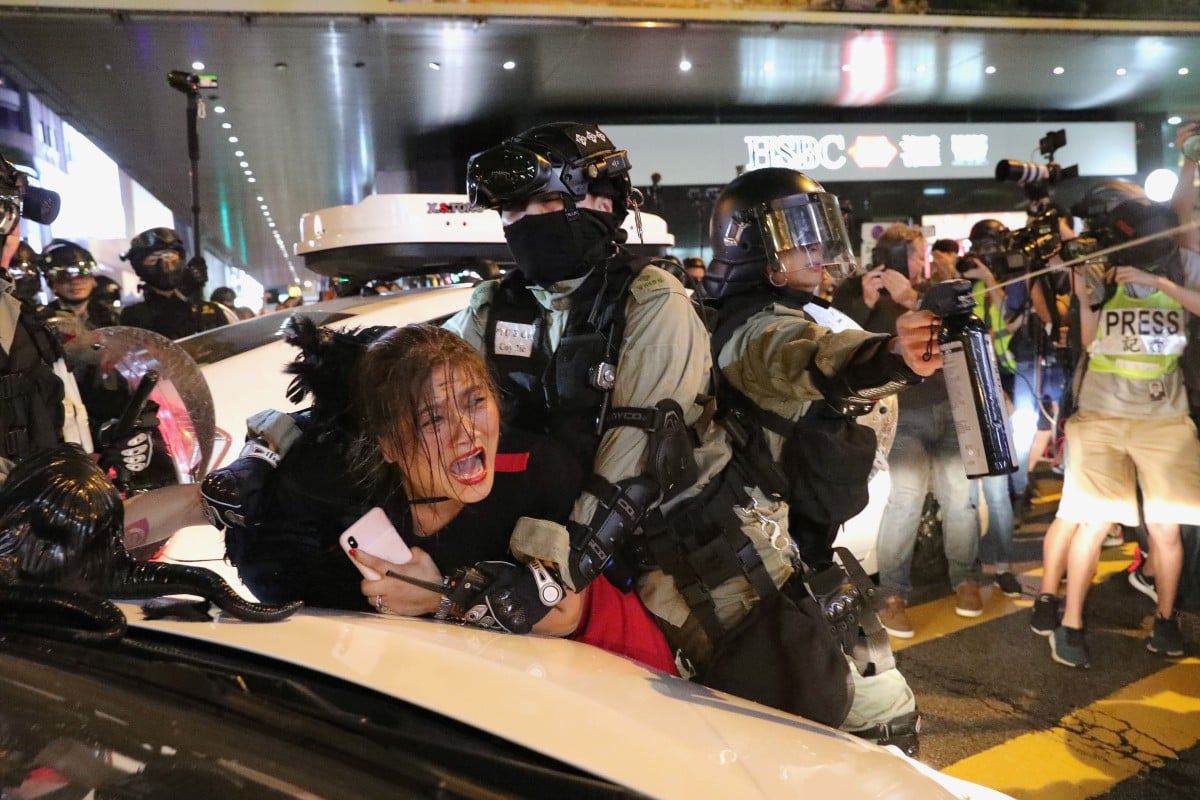 A party-goer is arrested near Lan Kwai Fong in Central on Halloween.

Halloween wasn't as festive as usual in Hong Kong this year as police fired tear gas to disperse protesters in Mong Kok and Central who had gathered against alleged brutality by the force and against the ban on masks.

After roads in Central were occupied by more than 1,000 protesters, the force fired multiple rounds of tear gas on Pedder Street. Further up the road in the clubbing district of Lan Kwai Fong, police used pepper spray on a crowd of mostly reporters while two women were arrested.

A police source also confirmed an assistant clerical officer from the chief secretary’s office was arrested for unlawful assembly, wearing a mask and assaulting a police officer in Mong Kok.

The actions were just one of many throughout the evening that began in Mong Kok. Protesters surrounded Mong Kok Police Station and stood outside Prince Edward MTR station from late afternoon. At around 7pm police dispensed tear gas and pepper spray as protesters hurled water bottles at police wagons and threw bricks prised from the pavements to obstruct traffic.

They also vandalised traffic lights and exits of Mong Kok MTR station, forcing the station to close, before starting a fire on Nathan Road at about 9pm.

Students at HKU and HKDI take part in on-campus demonstrations

On Hong Kong Island, about 100 people, most with their faces covered, started to gather at Victoria Park in Causeway Bay at 7pm for an unauthorised march to Lan Kwai Fong to protest against a government ban on wearing masks at public assemblies.

Marchers wore all kinds of disguises, ranging from Halloween masks to paper cutouts of political figures and fictional characters.

Office worker Kenny Chum, in his 30s, wore a mask of US President Donald Trump. He said he wanted to use this festive occasion to protest against the anti-mask law and police’s use of force.

“I feel it’s a day where it’s fine to wear face mask, like all Halloweens in the past,” he said.

“Police are overly sensitive and have made things feel tense. It’s supposed to be a day for fun.”

Loo Lo, 25, said she always celebrated Halloween but there was a political side to this year. She dressed as the Joker, a character she said symbolised the fight against the government and the anti-mask law.

“We could all be the Joker and we are connected, to fight the same cause,” she said.

Peter Law, 26, wore a mask featured in V for Vendetta. The engineer said he had not celebrated Halloween in previous years, but this year wanted to express his dissatisfaction over the anti-mask law. He insisted he was not taking part in a public assembly, but to celebrate the festival.

“If police arrest people celebrating, then I have nothing to say. It only proves Hong Kong is a police state.”

In Lan Kwai Fong, most bars were opened as usual, but even those on the main road were not full or busy.

Police blocked the junction between D’Aguilar Street and Wellington Street at 8pm, causing a stand-off between officers and hundreds of residents.

Waqas, a bartender at a bar called Chocolate, said the police presence had made business worse.

“If police weren’t here, at least some of our regular guests would have come for a drink,” he said.

Sahil Md, 33, an employee at two bars at Win Wah Lane, said police blocking the entrances meant no businesses for them.

At midnight, a police source said at least 30 people were arrested in Central and Mong Kok.