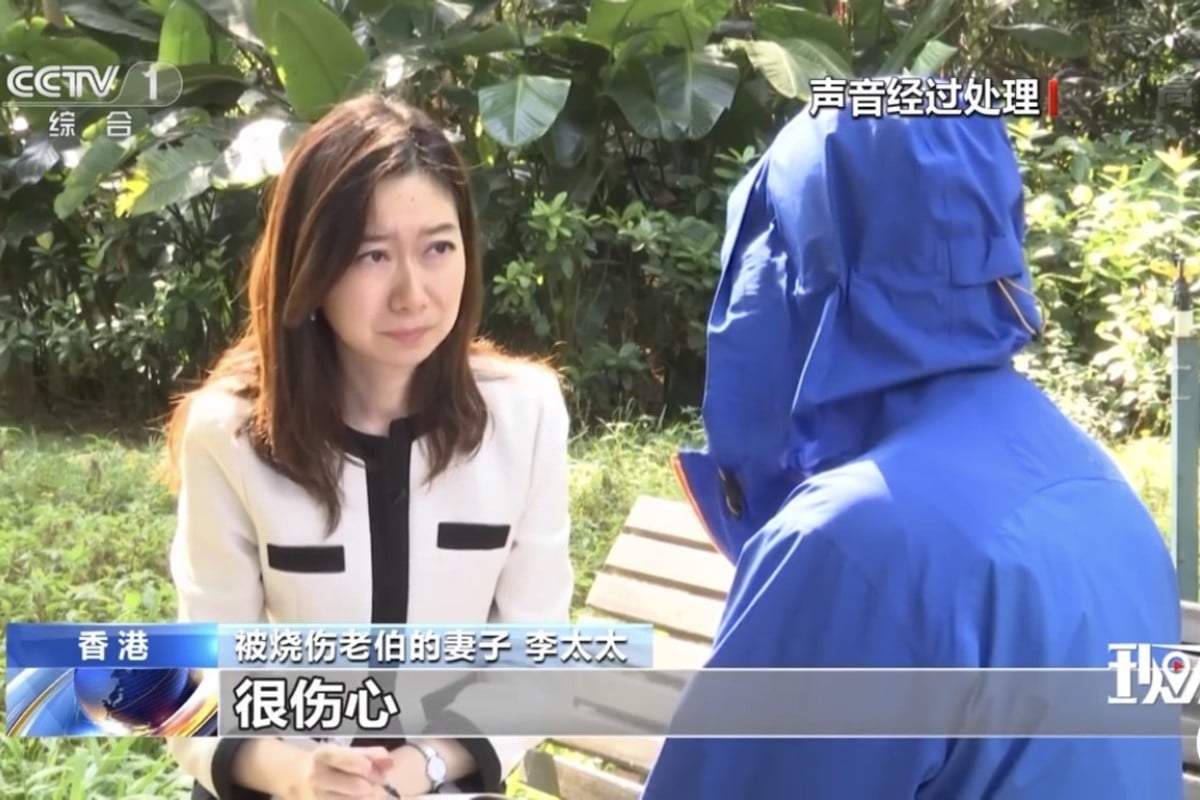 The wife of the middle-aged man who was set on fire by protesters last week has given an emotional interview to Chinese state television.

The wife of the man who was set on fire during the protests in Hong Kong last week has told Chinese state television she was “heartbroken” by his injuries.

Lee Chi-cheung, 57, was left fighting for his life after the attack, which occurred on November 11 after a dispute with a group of masked people who had vandalised an MTR station in Ma On Shan.

Police have classified the case as attempted murder and a spokeswoman from the Fire Services Department said Lee had sustained second-degree burns to 28 per cent of his body.

The interview with his wife by CGTN, the English-language arm of the official state broadcaster CCTV, swiftly went viral on Chinese social media on Monday.

Footage of the attack on the construction worker and father of two prompted widespread condemnation by Chinese state media and “Uncle Lee” has attracted widespread sympathy in mainland China.

His 51-year-old wife, who asked not to be identified, said in the interview that her husband was still in a coma and had undergone skin graft surgery on his hands, with more surgical procedures needed on his chest, abdomen and face.

“I never imagined that this would happen to me,” she said.

Lee Chi-cheung was set on fire after clashing with a masked group.
Photo: Handout

“The nurse said he was seriously injured. Seeing him like this, I could not speak … I talk to him, but I don’t know whether he hears me or not.”

The woman claimed that Lee “never talked politics at home and never participated in any political events”.

She also expressed gratitude towards well-wishers who sent messages hoping for her husband’s speedy recovery, and said she hoped “the rioters can stop their violent acts as soon as possible and not mess up Hong Kong”.

The interview prompted further condemnation of the Hong Kong protests, which have been going on for more than five months.

“It’s hard for ordinary people to see, how much more painful would it be if it was your own family member? Evil-doing rioters must be brought to justice as soon as possible,” read one comment.

Another attacked a mainland academic who faced widespread criticism online after leaked chat logs suggested he had implied that the attack on Lee had been faked.

“Didn’t that university professor or PhD researcher say it was faked? Let’s see you try and fake it,” read one comment with more than 10,000 likes.

State media has also amped up its rhetoric against the pro-democracy protests. Hu Xijin, editor-in-chief of the Global Times tabloid, condemned the attack against Lee and likened protesters to the terrorist group Islamic State.

Hong Kong police said they had arrested one woman and one man suspected of being at the scene of the attack for “illegal assembly”.

Both suspects remain in custody.