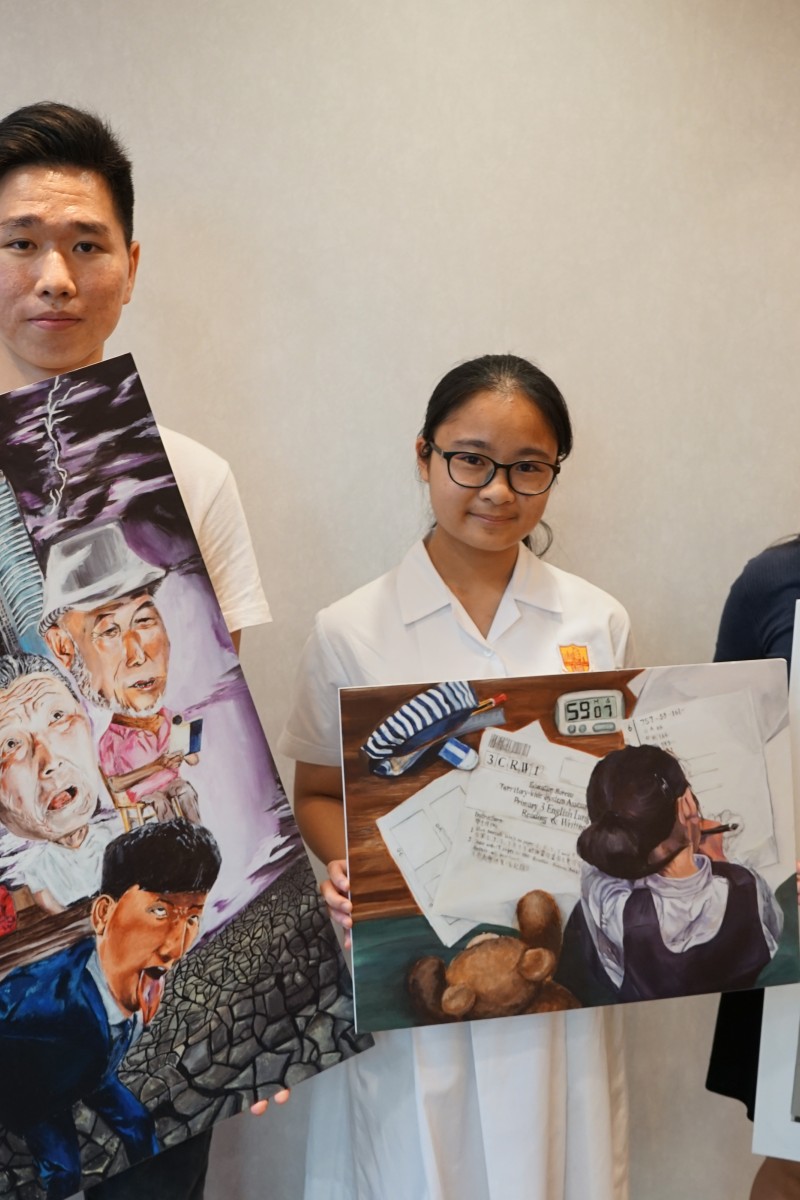 From the TSA to social issues, The Wharf HK Secondary School Art Competition winners get real and emotional in their artwork 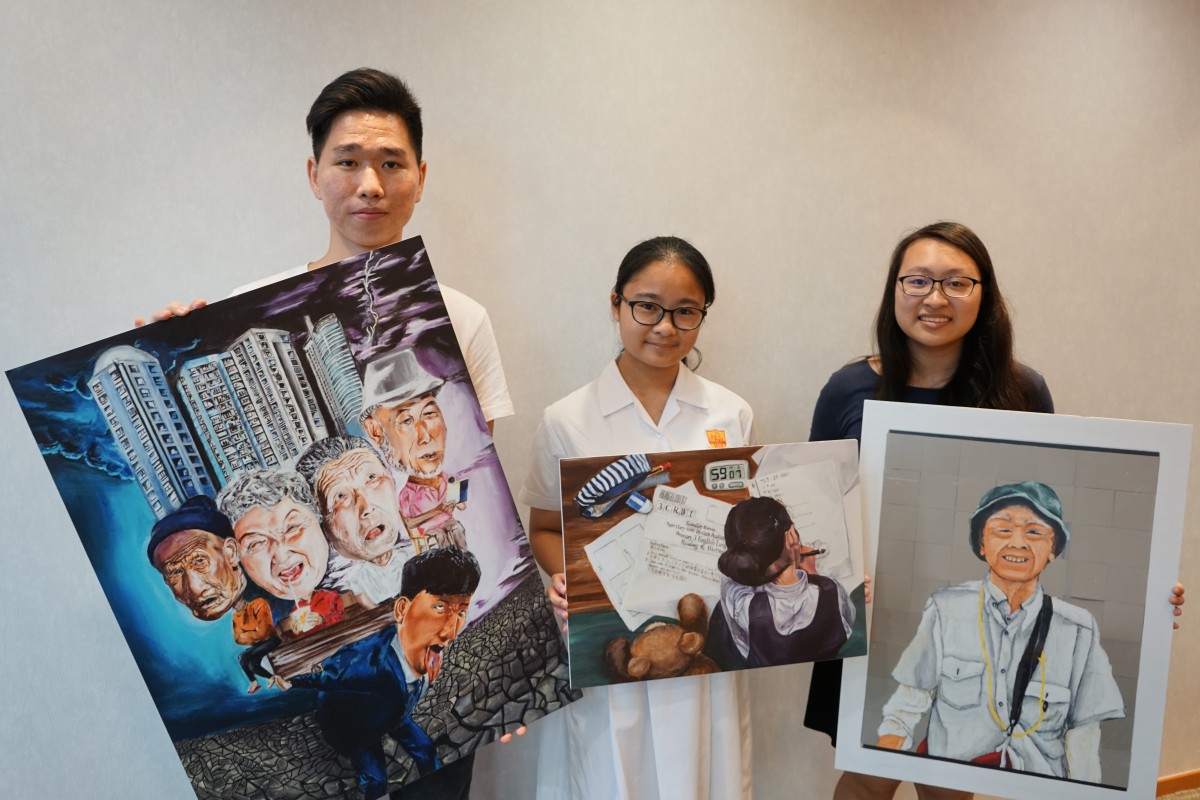 They say a pen is mightier than a sword, but how much power does a paint brush hold? Seemingly a lot, from the way some of the city’s best young painters were able to use their brushes to draw emotion and bring to light social issues that are often overlooked.

Tjia Man-yan, 17, Agnes Yeung Cheuk-yan, 17, and Chan Wing-hong, 19, each brought home a trophy for being the top three of The Wharf Hong Kong Secondary School Art Competition 2017-2018 in April.

Since then, their artworks, namely The Torturous Student Assessment, Grinning from Ear to Ear, and Burden, have been shown in different public spaces around the city including Times Square and Harbour City, alongside other outstanding entries.

Young Post caught up with the three art prodigies earlier and asked them about the meanings behind their paintings.

“My submission is about, and a wordplay of, the TSA [the Territory-wide System Assessment],” Man-yan, the champion and creator of The Torturous Student Assessment, shared with Young Post.

In her painting, a young girl in her school uniform gets stuck into preparing for her TSA, and ignores her teddy bear’s invitation to play.

The Form Five student from Munsang College says she doesn’t think it’s right for primary school students to give up their leisure time to study for the assessment.

Man-yan recalled being upset about having to sacrifice her reading time in school to prepare for the assessment.

As the purpose of the TSA is to measure students’ strengths and weaknesses, as well as the teaching quality of the educational institutions, the schools – rather than the students – should bear the responsibility of performing well in the assessment, she added.

Man-yan said she was encouraged to appreciate art by her father since she was a toddler, and that she started experimenting with pencil drawing, water colouring and acrylic painting from a young age.

Despite starting early, being crowned the champion came as an utter surprise to the second-time participant who wasn’t shortlisted last year.

“Perhaps the reason why I won is that I finally grasped the language of art,” she said, explaining that she had, in the past, lacked emotion in her paintings.

The first runner-up Agnes is, likewise, not a first-timer of the Wharf art competition. For her third entry, the final-year student from the Carmel School Association Elsa High School decide to pay tribute to her grandfather.

“I took the opportunity and drew a portrait of my grandfather to thank him for taking me to school since my first day of high school.”

Her grandad had always told her that taking her to school every morning was his motivation to start the day, and she realised she felt the same way.

Her winning work titled Grinning from Ear to Ear, features an old man standing with a broad, benevolent smile. “I hope the viewers can share my joy of seeing his smile every morning,” she said. She also explained that the reflective background, made up of small square mirrors, was a deliberate choice.

“I wanted people to be able to interact with my work,” she said. “When they look at my painting, they are also looking at themselves, and I hope that will remind them of their senior family members, and the importance of showing gratitude to them.”

Graffiti artist Alec Monopoly on where he got his name, and street art vs gallery art

Wishing to pursue theatre design in the future, Agnes hopes that her success in the competition would change her grandfather’s opinion about studying arts at university.

“My grandfather was very amazed [that I won]. He hadn’t been very supportive of my desire to study arts, but I hope that me winning this award will help him to recognise my artistic talent,” she said.

As for the second runner-up, Chan Wing-hong, his inspiration to paint is often drawn from social issues. For the competition he decided to paint about the ageing population.

In his work Burden, Wing-hong’s future self is portrayed as a working-class citizen dressed in a suit, who is struggling to shoulder four elderly people and residential buildings on his shoulders amid a terrible storm.

Ancient Chinese tradition of zhizha, or paper craft, has paid off for lion dancing fan

The Form Six student from New Asia Middle School wanted to express his feelings on “the burdens that [his] generation will have to bear in the future”.

“With the ageing population in Hong Kong, each teenager will have to [pay high taxes to] support [their grandparents] in the future,” said Wing-hong, who was encouraged by his Visual Arts teacher to join the contest.

He added that he hopes more people will pay more attention to social issues like this.

For those who missed the previous exhibitions, there’s still a chance to appreciate the amazing artworks at the Hong Kong Arts Centre from August 9-15.