You’ve probably got a small fortune amassed in your flat in small coins, you just don’t know it. Don’t worry, the Hong Kong Monetary Authority’s Coin Collection Programme is here to help with that 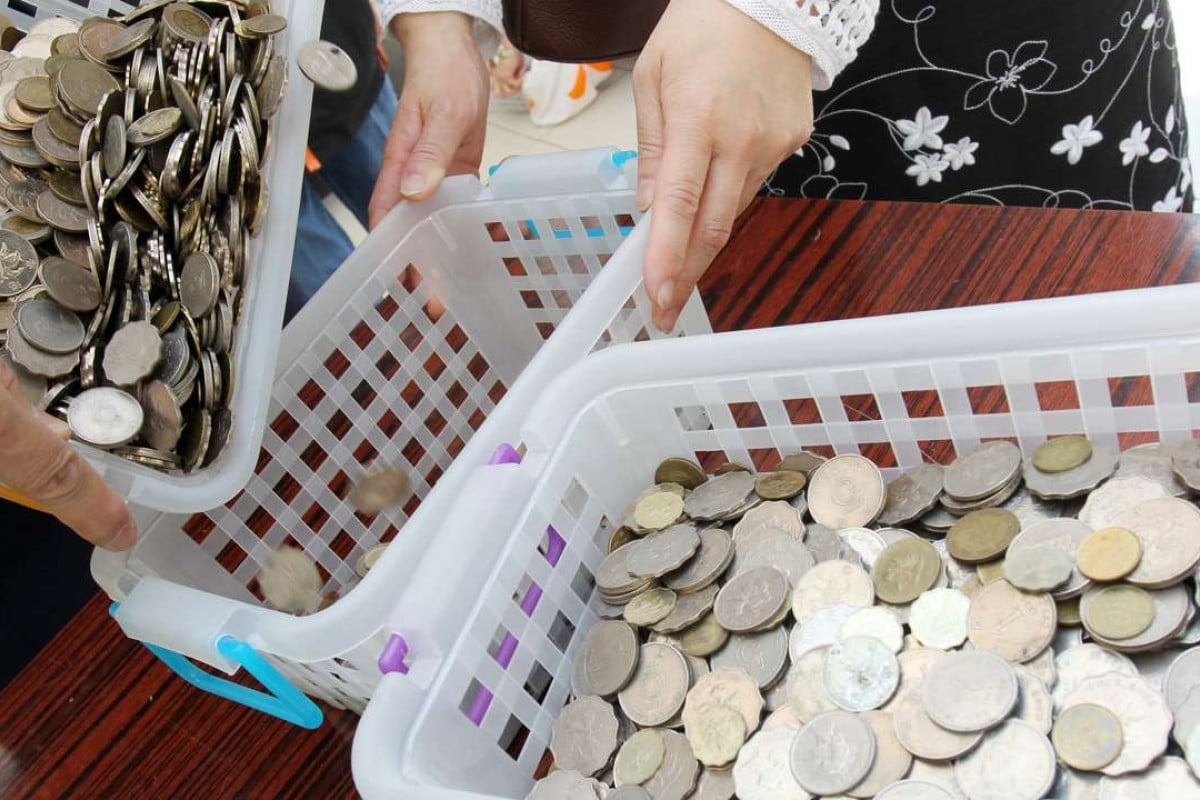 The coins are being collected to increase their circulation in Hong Kong, and to prevent them from being forgotten in peoples bags and homes.

Rattle the pockets of an old coat or dig into your sofa and your hands are likely to emerge with a fistful of tiny coins. Little 10, 20 and 50 cent pieces seem to accumulate everywhere – and some shop keepers and taxi drivers won’t even accept the smallest coins these days, which means people don’t know what to do with them, and they end up with dragon-esque hordes of spare change hidden all over their homes.

The Hong Kong Monetary Authority (HKMA) noticed that the number of coins in the system seemed to be decreasing, so in 2014 came up with a plan to get them back into circulation.

In October that year, a pair of “coin carts” were each fitted with two coin-counting machines, which can process several hundred coins per minute. After getting decked out with a wrap designed by Shun Tak Fraternal Association Tam Pak Yu College student Wong Yiu-man, the vans were ready to gobble up loose change and replace all that jangling metal with more useful notes or Octopus credit. The carts head to housing estates or lay-bys in each district of the city, setting up camp for a week in each location.

Face Off: should the yuan replace the Hong Kong dollar?

“The coin collection programme provides a channel for the public to get value for their coins in addition to the existing banking system,” said Norman Chan, the Chief Executive of the HKMA. “The coins collected will be recirculated to meet public demand, making circulation more efficient and reducing the need for minting new coins.”

Vans with pictures of coins on the outside sound incredibly tempting for thieves. To protect staff, the vans are operated by a security company and driven by people who know how to look out for potentially risky situations, and how to react in the event of a hold-up.

HKMA staff check the coins for any serious signs of damage.
Photo: May Tse/SCMP

Before customers throw their money into the slot, staff check the coins for any serious signs of damage. A few scuffs or a bit of discolouration is fine, but the carts won’t accept coins that are dyed, wet, mouldy or rusty, as these could break the machine. Coins that are too difficult to distinguish are rejected, too. Damaged coins can be exchanged for other currency at local HSBC branches, but if the value of the coins is beyond recognition, the banks may refuse to change them.

When the coin cart scheme started, there was speculation that the government might be trying to phase out smaller currency, which isn’t always as convenient in today’s society. But an HKMA spokesman told Young Post that collected coins are “recirculated in the market to meet demand”.

Why Hong Kong money might be bad news for vegetarians

He added: “Despite an increasing popularity of electronic payments, the market demand for small denomination coins has still been increasing because of economic growth and increased retail transactions. The circulation of cent coins in the past five years increased by 12 per cent. In view of stable demand in the market, the HKMA has no intention to abolish or stop issuing small denomination coins.”

Since the launch of the programme, the vans process an average of HK$2.4 million worth of coins a week, and attract about 9,500 Hongkongers each month. By early this year, the two coin carts had completed 12 cycles each in 18 districts. Together, they have processed 258,000 transactions, collecting a total of 218 million coins adding up to HK$265 million.

Not everyone is taking their money and running, though: HK$128,500 was donated to charity from the vans’ Community Chest boxes by the end of last year. It’s safe to say the scheme has been a success, so the HKMA is keeping the carts on the roads for another two years.

Where will the coin carts appear next? Find out here.

How to clean up an old coin

Has your coin been rejected by the coin cart counting machine? Don’t throw it away!

Note: if the coin is rare or antique, cleaning can decrease its value. So it’s worth checking with an expert before you start scrubbing.

One of the rarest Hong Kong coins you can find is a bronze One Mill from 1864, the year the Hong Kong Shanghai Bank was established. Depending on their quality, specimens can fetch between HK$15,000 and HK$40,000.