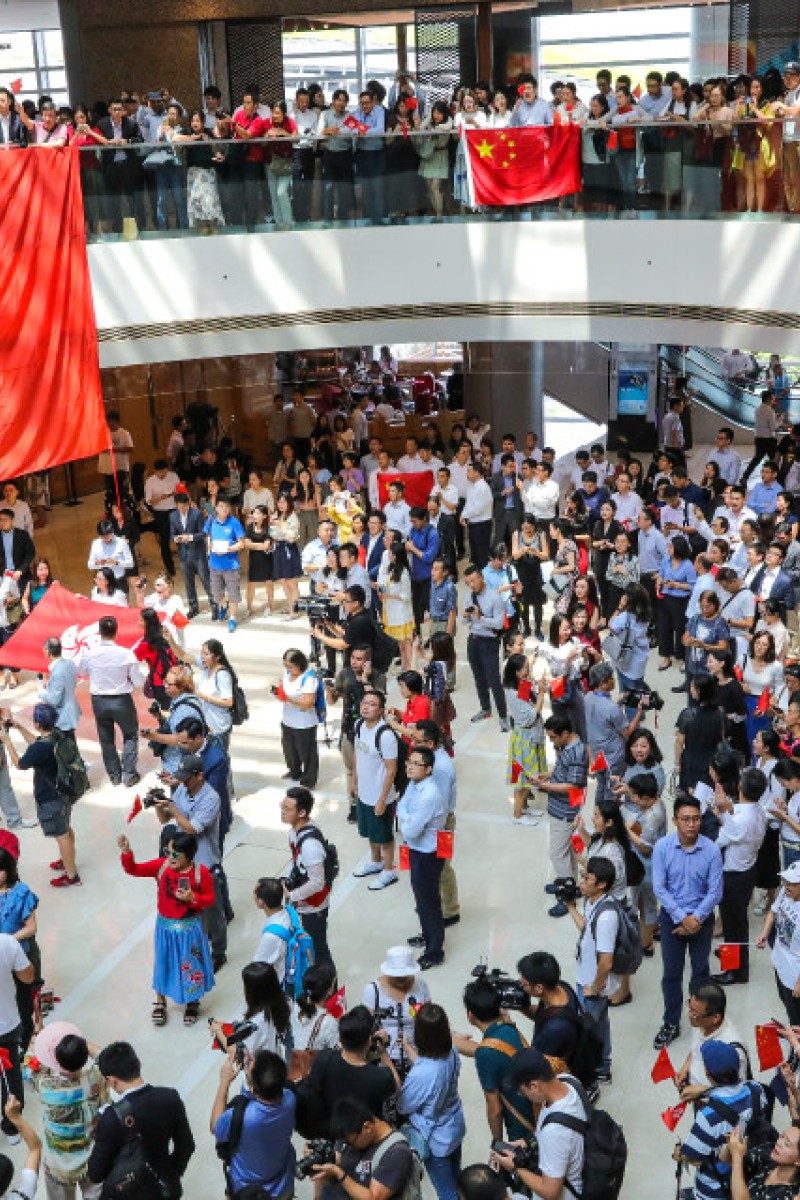 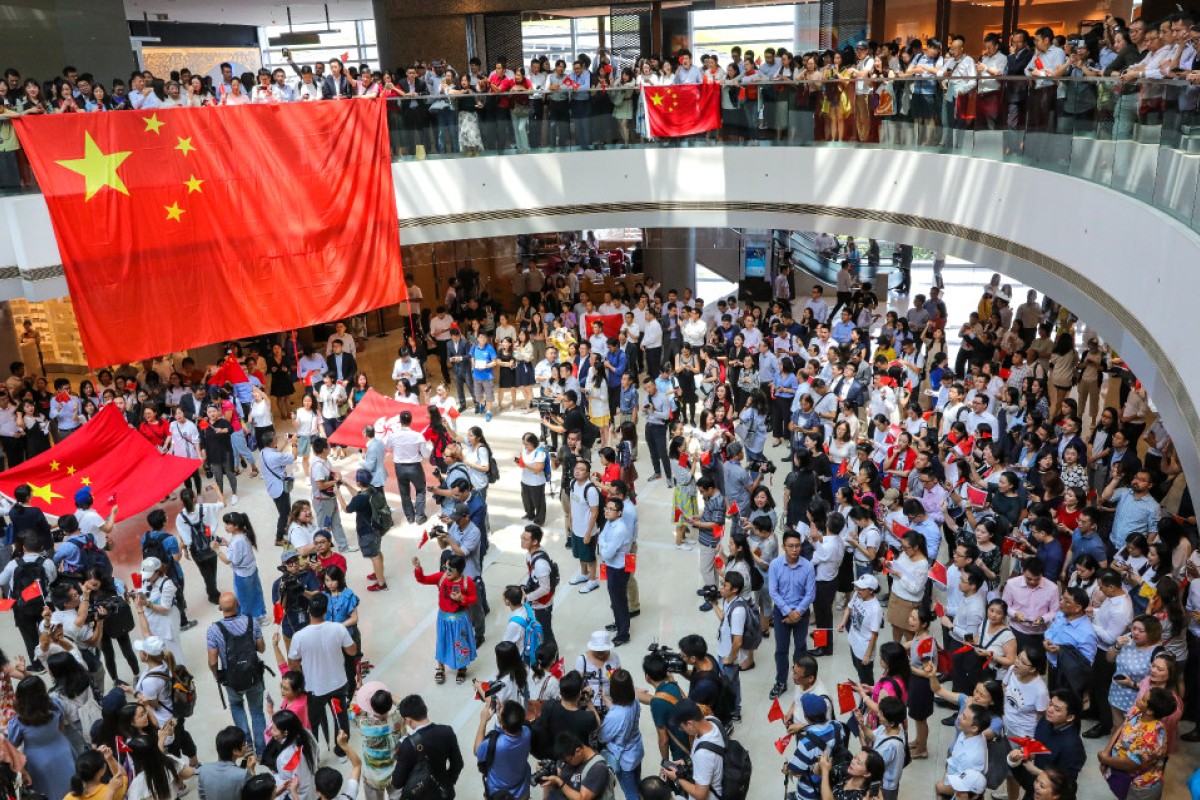 Pro-China demonstrators, with China flags, sing the national anthem and gather at the International Finance Centre (IFC) in Central as part of a flashmob during the Hong Kong protests in September.

Activists in Hong Kong say the government may have purposefully scheduled the second reading of the National Anthem Bill on the same day as class resumption for secondary school students to “minimise protest crowds”.

On Tuesday, Chief Secretary Matthew Cheung Kin-chung said the proposed law would top the list of 10 government bills to be discussed on May 27. The reading coincides with the resumption of classes for Secondary 3 - 5 students, after a long break since the Lunar New Year holiday in late January due to the coronavirus pandemic.

“The government sees secondary and university students as potential protesters, so it is not surprising that it chose to table the second reading of the bill to the same day as when classes resume,” said Nathan Law Kwun-chung, a pro-democracy activist and co-founder of political group Demosisto. “It can be seen as a tactic the government uses to minimise protest crowds.”

The chief secretary for administration’s office told Young Post that May 27 is the earliest possible date for the resumption of the second reading of the National Anthem Bill, along with nine other bills. It said the decision was based on the Legislative Council Rules of Procedure.

“This has absolutely nothing to do with the resumption of school for senior secondary students,” the spokesperson added.

The National Anthem Bill is a proposed law which aims to “protect and promote” the national anthem in Hong Kong. The law penalises anyone for misusing or insulting March of the Volunteers, the national anthem of China, with a fine of up to HK$50,000 and three years in prison. It had been criticised for eroding freedom of expression.

“It will hamper students’ abilities to reflect on the wrongdoings of the country and their ability to think critically. The national anthem law might also be used as a tool to suppress, similarly to the prohibition on public gatherings that’s being used to target political assemblies now,” added Law.

Will the 2020 pro-democracy protests attract as many people as last year?

Issac Cheng Ka-long, spokesperson of student activist group Hong Kong Secondary Schools Student Strike Platform, also a leader at Demosisto, agreed that the juxtaposition of the reading and resumption of classes was aimed to minimise the number of protesters, since many secondary school students have been involved in the social movement.

Cheng believes the national anthem law is meant to suppress Hong Kong students, “Just like the abuse of the regulation to prohibit group gatherings has been used as a tool to crack down on protests, if we pass this law, once the national anthem is played, all movements and activities by protesters would be deemed illegal.”

Therefore, according to Cheng, passing the bill might also mean the suppression of protests and freedom of assembly. On top of that, he says the law directly affects primary and secondary students' education.

Carrie Lam says she will "fix" Liberal Studies this year

“Once the bill passes, schools will have to educate students on the history and spirit of the anthem, as outlined in the bill. But the meaning of ‘spirit’ is very vague, and the Secretary for Education will have to interpret it. If that’s the case, brainwashing educational topics like national defense, national security and praise for Xi Jinping can be packaged as the 'spirit of the anthem' and be incorporated into the curriculum too,” Cheng said.

Lin Kai-chun, a 15-year-old student at Bishop Hall Jubilee School, said he believed it was just a coincidence that the second reading and the resumption of classes happen on the same day. “The Legislative Council holds a meeting every Wednesday. On top of that, a lot of university and lower-form secondary students still don’t have classes that day,” he said.

Kai-chun also did not think there would be any actual effect on Hong Kong’s teenagers if the bill passes. “The law punishes those who insult the national anthem, which I think would only affect a small number of people. However, the implementation of the law might anger those who have been participating in the protests since last year and it might further incite people’s discontent towards the government.”

Although Kai-chun did not think the law itself is problematic, he believes now is not the best time to for the second reading. “The coronavirus just started to ease up and we’re still in the midst of political turmoil left over from last year,” he said. “Hong Kong’s economy is already suffering, and we won't be able to afford another huge blow.”

In a letter to Starry Lee Wai-king, chairwoman of pro-Beijing political party Democratic Alliance for the Betterment and Progress of Hong Kong (DAB), Chief Secretary Matthew Cheung Kin-chung said, “the national anthem is a symbol and sign of the nation. The purpose of the national anthem law is to enact the law of the People’s Republic of China by local legislation.” He said the government had a “constitutional responsibility” to carry out the enactment as soon as possible.

A pro-Beijing Facebook page called Silent Majority for HK, which has more than 330,000 followers on Facebook, published a post on Wednesday saying that the national anthem is the same as the national flag, as they’re both symbols of the country. “As Chinese, we must support the implementation of the national anthem law!” it says.