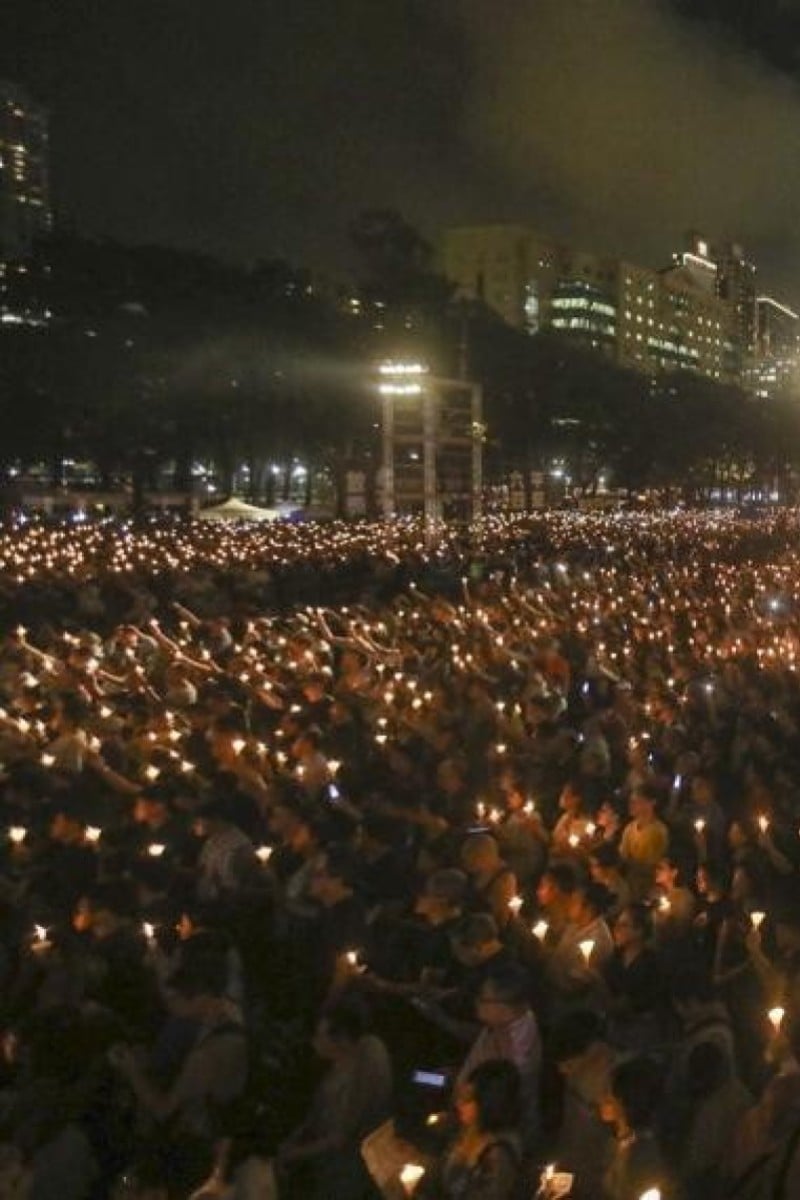 Banned due to Covid-19, here’s what you should know about Hong Kong’s annual Tiananmen Square vigil 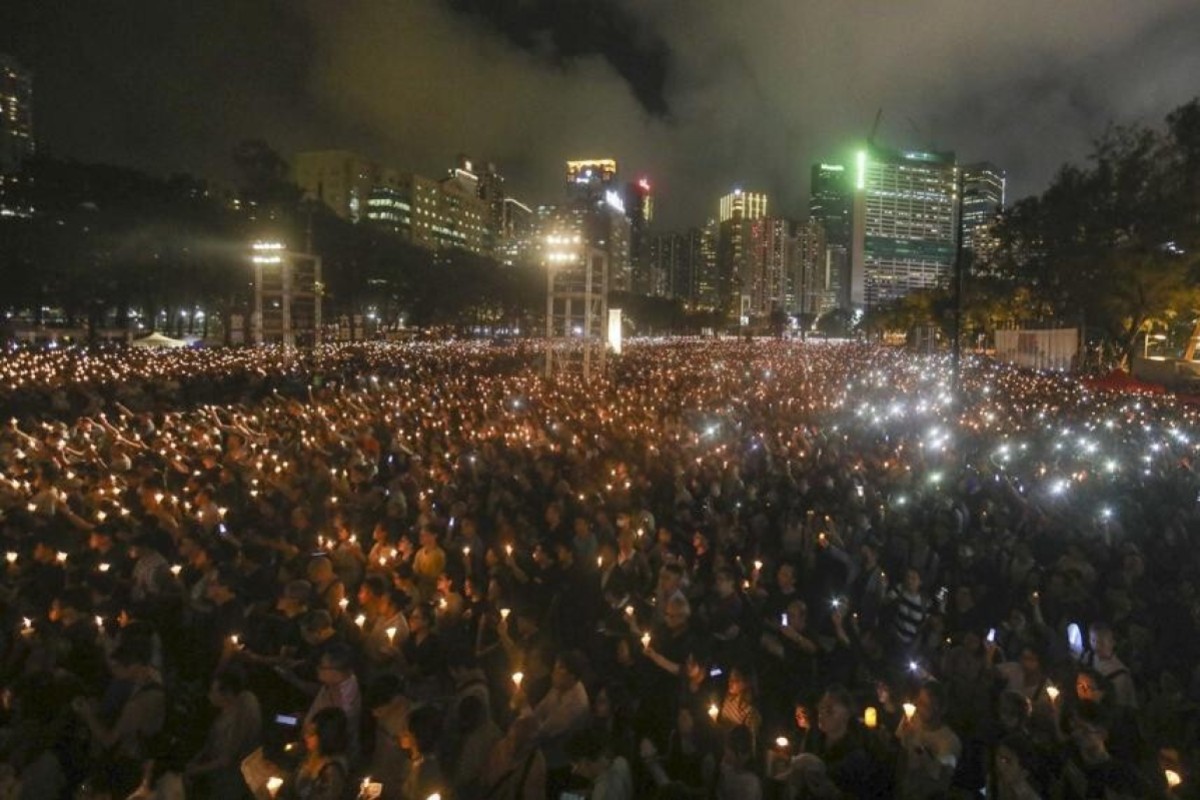 Hong Kong's Victoria Park is filled with candles as attendees mark the anniversary of the Tiananmen Square crackdown.

A ban on public gatherings due to the Covid-19 pandemic will interrupt a decades-old Hong Kong tradition that has turned Victoria Park into a sea of lit candles every June 4, a commemoration of the bloody 1989 crackdown on the student-led protest movement in Beijing.

But the Hong Kong Alliance in Support of Patriotic Democratic Movements of China, which organises the annual candlelight vigil, has vowed to head to the park nonetheless, at the risk of police intervention.

Others have made alternative plans to join Thursday’s vigil remotely, staging events marking the Tiananmen Square anniversary in theatres and churches.

Here is what you should know about the annual candlelight vigil and why it matters to Hong Kong, China and the world.

What is the significance of the annual commemoration of the Tiananmen Square crackdown?

The candlelight vigil in Hong Kong’s Causeway Bay area is the only large-scale public commemoration of the June 4 crackdown on Chinese soil.

Begun in 1990, organisers estimate the vigil has been attended by millions.

Apart from Hong Kong residents, the event is also known to draw attendees from mainland China, and has served as an entry point into politics for some Hong Kong students.

The alliance’s chairman, former lawmaker Lee Cheuk-yan, said the vigil provides support and hope to those on the mainland who are unable to openly mark the crackdown.

A woman and child light a candle during the 2018 remembrance at Victoria Park.

“When the whole of China is in the dark, in Hong Kong, we can still retain this memory, to fight against forgetfulness,” Lee said.

During the hours-long vigil, guest speakers – including witnesses to the crackdown and young students determined to carry the torch – share their stories on stage, while pre-recorded videos featuring members of Tiananmen Mothers, a support group for victims’ families, are played.

Attendees are also led in singing songs such as Flowers of Freedom and All for Freedom, which were written to remember the crackdown.

In addition to calling on the central government to change its official labelling of the 1989 movement as an episode of “counter-revolutionary turmoil”, the alliance each year urges Beijing to release jailed activists and hold officials accountable for the lives lost.

Common chants heard at the vigil include “end to the one-party dictatorship” and “building a democratic China”.

30 Hongkongers from different generations reflect on the June 4 crackdown

What will be different on June 4 this year?

For the first time in 30 years, the Hong Kong police have banned the vigil on public health grounds.

Citing the government’s coronavirus-driven ban on public gatherings larger than eight persons, the police have said any large public assemblies would increase infection risks for the public.

The alliance has branded the ban as politically motivated, while Chief Executive Carrie Lam Cheng Yuet-ngor said the group was free to appeal the force’s decision.

“People should be mindful of the legal risks [of gathering in public areas] and the potential use of force by police,” Li said.

The Goddess of Democracy statue usually has a central position at the yearly vigil.

What alternative actions may the public and activists take in light of the ban?

The alliance has said its members will still head to Victoria Park to observe a moment of silence.

It has also urged people to join the commemoration by lighting candles across the city and watching a live stream. About 100 booths will be set up in various parts of town to hand out candles, the alliance said, an effort to be aided by local opposition district councillors.

Wang Dan, 51, a former Chinese student leader who lives in exile in the United States, has also said a group of activists who took part in the 1989 movement will hold an online vigil.

In Hong Kong, a local theatre company’s June 4-themed performance, May 35th, was live-streamed for public viewing on Wednesday, and at least seven churches will hold special nighttime masses to commemorate the victims of the crackdown and pray for justice and peace in China and Hong Kong.

Facts about the Chinese premier who backed the Tiananmen crackdown

What is the likely future of the vigil given Beijing’s planned national security law for Hong Kong?

China’s top legislative body, the National People’s Congress Standing Committee, is drafting a national security law that could be imposed on Hong Kong as early as August.

The law’s stated intent is to prevent, stop and punish secession, subversion of state power, terrorism and foreign interference in Hong Kong, though the city’s opposition politicians and legal scholars warn it could be used to suppress dissent and erode freedoms.

Lee said the national security law could spell doom both for the peaceful vigil and the alliance, which calls for the end of “one-party dictatorship” on the mainland.

An overhead view of the 2019 Tiananmen Square vigil, the event's 30th anniversary.

Should the vigil and alliance be banned, Lee said it would signify the end of the “one country, two systems”, Beijing’s governing principle for the city, which promises a high degree of autonomy.

Losing the vigil as a fundraising base would also impede the alliance’s operations, he added.

Basic Law Committee vice-chairwoman Maria Tam Wai-chu on Monday said she would advise Hongkongers to leave if they were at an event where they heard slogans calling for an end to “one-party dictatorship”.

“You have to make a decision. If that is not your goal, you should walk away,” she said.