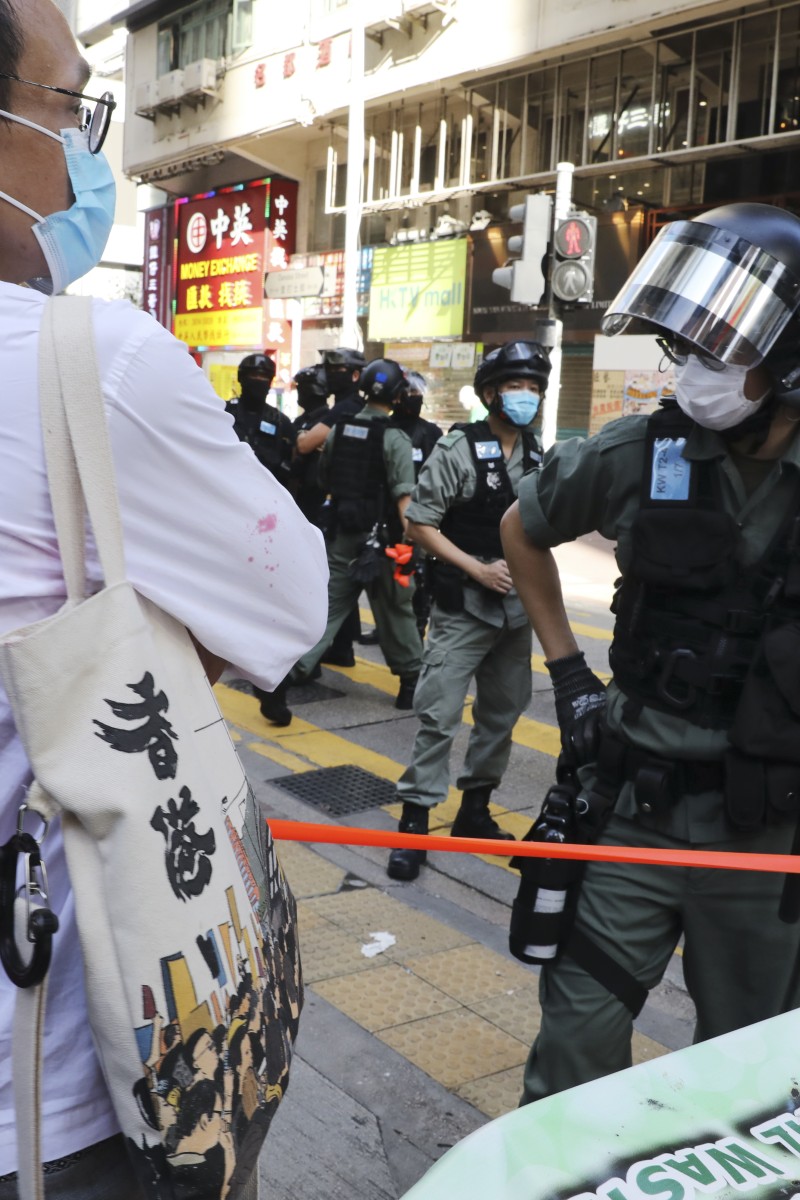 A man wears a shirt with Chinese characters which read "national security" as riot police disperse protesters during a silent march from Jordan along Nathan Road to Mong Kok in protest against the national security law. Photo: SCMP/Dickson Lee

Dozens of Hongkongers were arrested on Sunday during a protest against the impending national security law, while China's top legislative body began a three-day meeting in Beijing.

The law, which is being tailor-made for Hong Kong, topped the agenda of the special meeting of the National People’s Congress Standing Committee.

Two district councillors were among those arrested, and police said that 53 people had been detained “for unlawful assembly”.

What is the national security law? An explainer

In a Facebook post, the force said crowds had gathered along Nathan Road from Jordan to Mong Kok.

“Despite repeated warnings, some protesters refused to leave and continued to chant slogans. Police arrested a total of 53, including 41 men and 12 women gathering near Sai Yeung Choi Street for unlawful assembly,” the post said.

The arrests followed a lengthy confrontation at the corner of Dundas Street and Nathan Road. At one point, police used pepper spray to disperse the crowds.

One protester calls for the five demands during a silent march along Nathan Road on Sunday. Photo: EPA

The protests began to die down at around 7pm, and police started to leave the scene.

One participant said she felt she had to come out against the national security legislation, which was expected to be passed within the next two days.

“I don’t want to live in a city with no freedom,” said the woman in her 20s, who declined to be named.

“I am very worried about this law. I am also afraid that I can get arrested coming out today. But I feel that I must do so.”

There was a heavy police presence in Jordan and along Nathan Road, and officers raised the blue flag early, warning protesters they were taking part in an unauthorised assembly and must disperse immediately.

In nearby Mong Kok, an officer briefly fired pepper spray at journalists on Sai Yeung Choi Street South as police dispersed protesters. Police then told the reporters they could be arrested for obstructing officers in the execution of their duties if they continued to get in the way.

Another officer told a man yelling at him he could be arrested for disorderly conduct in a public place.

Earlier, police had made several attempts to stop small groups of protesters from marching along Nathan Road, but demonstrators slipped into side streets to continue marching towards Mong Kok.

Officers intercepted at least two groups of about 20 people in total, checking their IDs and searching their belongings.

Protesters urged each other to come out again on July 1, the anniversary of the handover of the city in 1997 from British to Chinese rule.

On Hong Kong Island, a planned march from 3pm at Victoria Park failed to take place. By 3.20pm, there were no protesters in sight, while teams of police officers patrolled the area around the park.

Outside Sogo department store in Causeway Bay, localist Michael Pang was setting up a booth to promote the primaries for the opposition in the lead-up to the September Legislative Council elections.