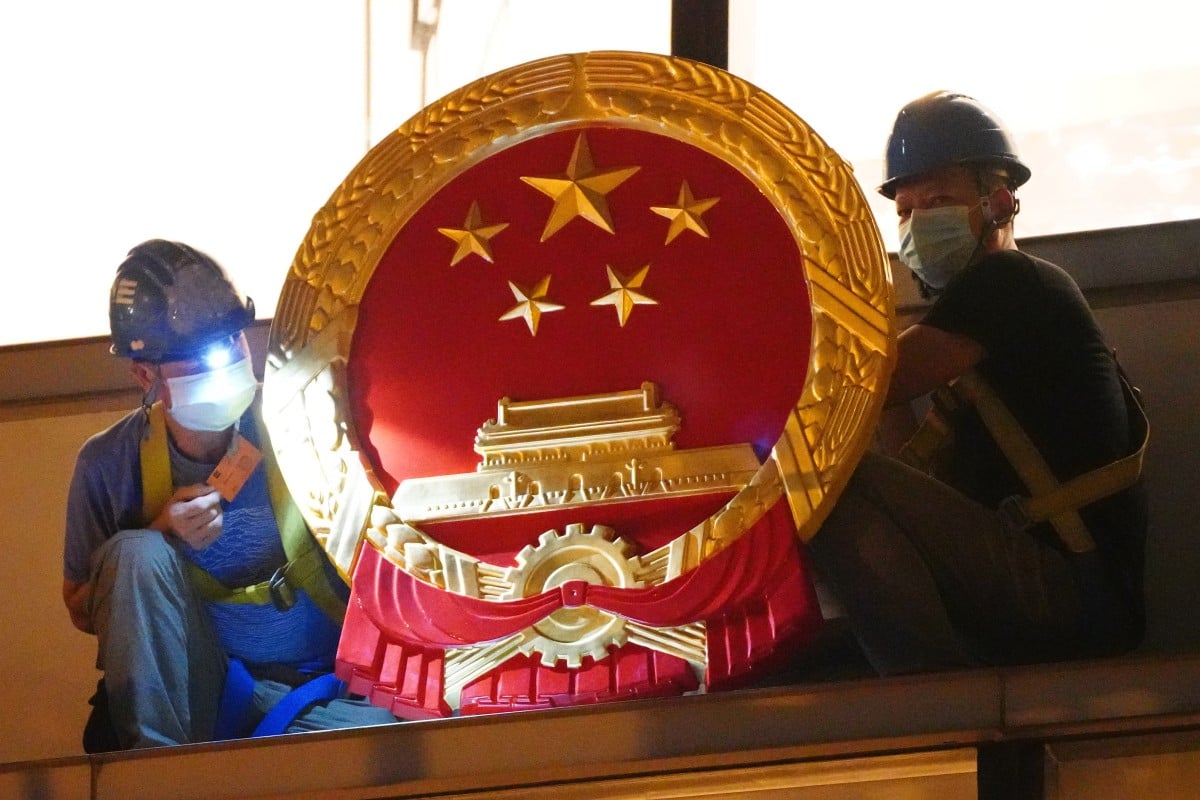 Workers fixes the National Emblem of the People's Republic of China to the temporary base for the Office for Safeguarding National Security (previously Metropark Hotel) in Causeway Bay. Photo: SCMP/ Robert Ng

The new Office for Safeguarding National Security officially opened in Causeway Bay yesterday. It is temporarily housed at Metropark Hotel, opposite Victoria Park, where protesters usually gather before marches.

“The new office is the envoy for Hong Kong’s safety and is also the gatekeeper of national security,” Luo Huining, director of the central government’s liaison office in Hong Kong, said after the flag-raising ceremony.

“Many foreigners in China think that China gives them the biggest sense of safety,” he said.

The Chinese national emblem and the sign for the new office were hung overnight. Water-filled barriers were placed around the exterior on Tuesday night, and Tung Lo Wan Road was blocked.

Hardliner Zheng Yanxiong, who was chosen to head the powerful new security agency, began working in the building on Tuesday.

The 56-year-old, formerly secretary general of the Communist Party’s Guangdong branch, is best known for his crackdown on protests that erupted in the village of Wukan in 2011.

Meanwhile, Zoom and Linkedin became the latest social media sites to join a growing list of tech companies refusing to give the Hong Kong government data that it asks for. The companies are worried about the new security law, personal privacy and human rights. A Zoom spokesperson told the Hong Kong Free Press that the company would monitor the issue.

Taiwan took a strident tone, saying the law had scared its people in Hong Kong. It condemned the rules which require “foreign and Taiwan political organisations and agents to provide information on activities concerning Hong Kong”.

“We want to warn both Beijing and Hong Kong authorities not to violate human rights and damage the legitimate rights of Taiwan’s agents in Hong Kong,” the Mainland Affairs Council, Taiwan’s top government agency responsible for policy dealings with Beijing, said.