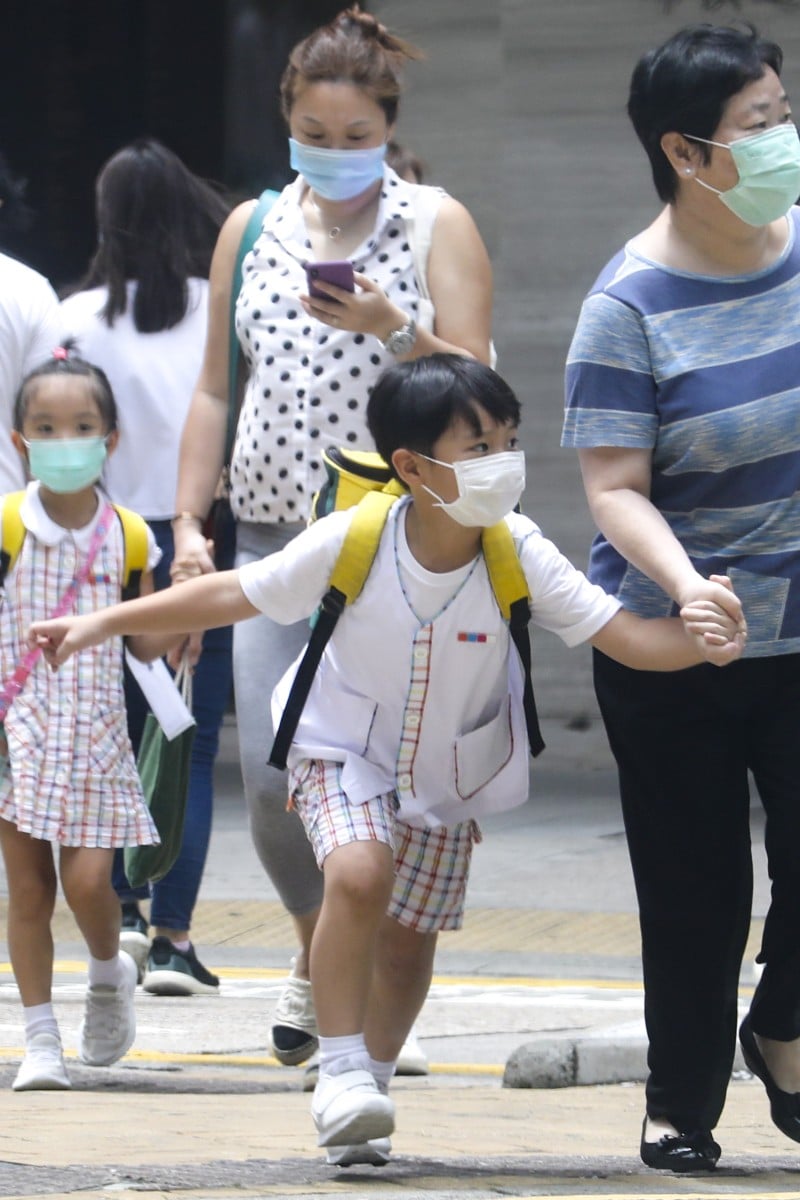 Primary school students leave the school premises in Causeway Bay. Due to the increased cases of COVID-19, the government has taken the precaution of suspending school (kindergarten, primary and secondary school) and allow students to begin an early summer holiday. Photo: SCMP/ Dickson Lee

The Hong Kong government has asked tutorial centres to suspend face-to-face activities for two weeks as the city faces its third wave of Covid-19.

The suspension would begin from Wednesday.

Education officials announced last week the suspension of face-to-face lessons in kindergartens and schools, bringing forward the summer break by about a week starting on Monday.

A parent concern group said it was “understandable” that summer tutorial activities had to be cancelled.

“Children’s health should be our priority. As the pandemic situation continues to worsen, it is necessary to strengthen infection control measures,” said Eiffel Chau, spokesman of Hong Kong Parents League for Education Renovation.

“But we also have to remember that most of our children had already missed out on a lot of school activities over the past months.”

Chau, who has three children in kindergarten and primary school, said parents were trying to protect their children’s mental well-being over the months of disruption caused by the public health crisis, while juggling the demands of their jobs.

Health authorities on Sunday classified face-to-face tutorial classes as high-risk activities, after at least two tutorial centres were linked with new Covid-19 cases over the weekend.

Non-governmental organisations holding summer youth activities, including the Boys' and Girls' Clubs Association and Hong Kong Federation of Youth Groups, have decided to cancel or postpone most of their July programme, or move some classes online.

The Social Welfare Department also said the suspension of its entire youth programme would continue, with only small group activities arranged by appointment.

However, many of the city’s thousands of private tutorial centres continue to hold some face-to-face summer activities, with infection-control measures and social distancing in place.

Yam Wai-ho, spokesman of the Hong Kong Education Centre's Union, which represents tutorial centres, dance or drawing studios and other schools offering interest classes, said concerns had been raised by some parents who refused to send their children to class for health reasons.

But most children were still continuing to attend tutorial and the hobby classes, he added.

Yam, who has run a tutorial centre in Aberdeen over the past 15 years for primary students, said precautionary measures including temperature screening, mandatory mask wearing and social distancing of about 1.5 metres between each student were already in place.

“But as the pandemic might last for some time in future, somehow we might have to come to get used to it, and find ways to live with it.”

Larger tutorial classes of 30 at his centre had been split into four with fewer than 10 students in each session,

Yam said, while the classroom was thoroughly cleaned several times a day. He believed the risks involved should be “minimal”.

Managing Director of Swiss Art Studio Gilbert Wong, who runs the centre’s nine branches with more than 1,000 pupils, said they had installed partitions on desks and bought extra sets of painting tools to ensure social distancing between teachers and students.

Clockenflap cancelled due to coronavirus

“Teachers used to share some painting tools with students, but now they would maintain minimal physical contact with teachers demonstrating their skills from a distance,” he said.

A parent surnamed Sze, with a four-year-old child in kindergarten, said the health risks posed by summer activities and the widespread cancellation of them had made parents more stressed, while children’s social lives were suffering.

“If the government is able to contain the [third wave] of infections on time, perhaps [parents] might still have August for our children to join some summer activities,” she said.