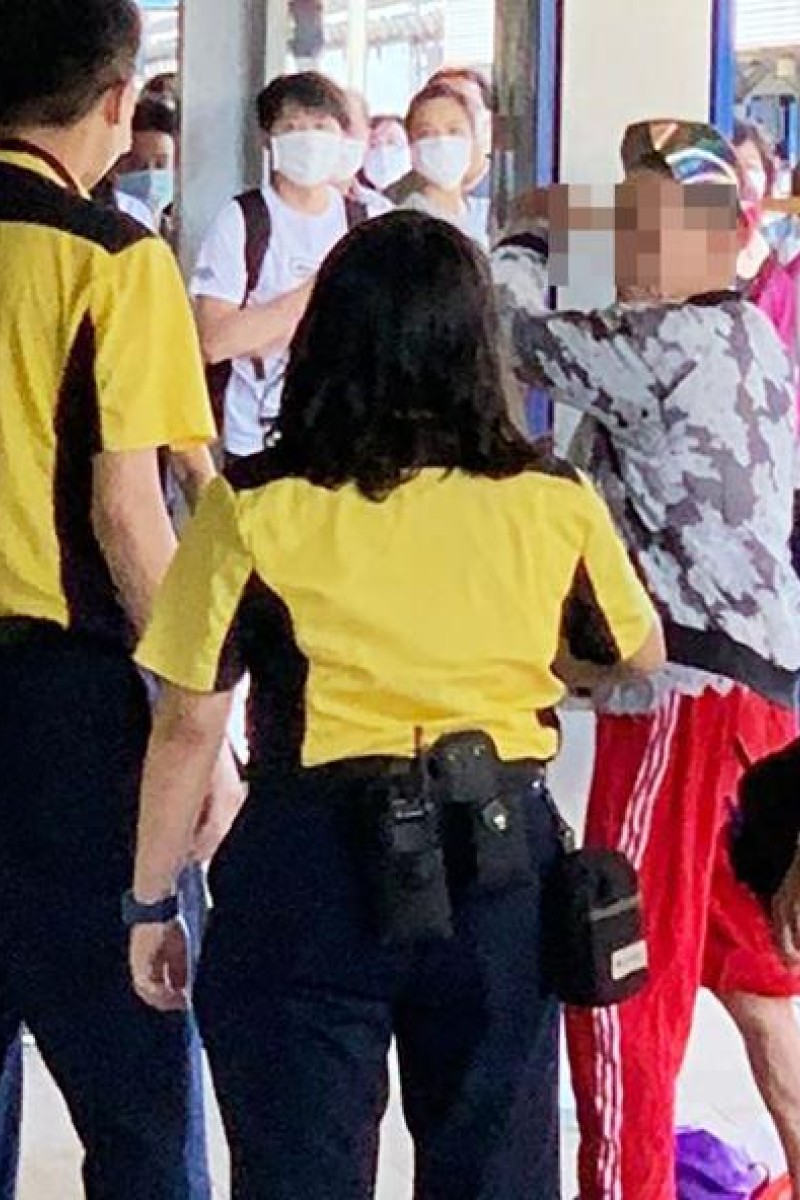 MTR staff at Tai Wan station surround a man who holds a stick over his head after refusing to wear a mask. Photo: Handout

A man arrested in an MTR station on Wednesday could be the first person prosecuted under a new regulation requiring Hong Kong residents to wear masks on the train.

The stricter new rules, which became enforceable on Wednesday amid a major uptick in local infections, legally require all passengers on public transport to wear a mask or face fines of up to HK$5,000.

Separately, police are searching for a customer at a McDonald’s in Tuen Mun who attacked the restaurant’s manager in the early hours of Tuesday after being asked to put on a mask.

Most of the city’s commuters were law-abiding as the new rules took effect on Wednesday, according to SCMP reporters who visited bus and rail stations in Kam Tin, Hung Hom and Causeway Bay.

That was not the case at the Tai Wai MTR station, where police said a 64-year-old man allegedly produced a wooden pole when station staff asked him to put on a surgical mask at about 8:30am.

He then boarded a train before police arrived, only to be intercepted at Hung Hom MTR station and arrested for possession of an offensive weapon.

“I was told the elderly passenger got emotional when other rail staff asked him to wear a mask. He even broke his glass bottle and made a scene. In the end, some staff escorted him to take a train to Hung Hom,” said Michael Chan, chairman of Railway Power, an MTR employees union.

Both the MTR Corp and bus company KMB have said they would not deploy extra manpower just to monitor compliance of the legally binding new rules.

Meanwhile, a citywide manhunt is under way for a man who assaulted an employee at a McDonald’s outlet in Tuen Mun. The incident happened at the Shan King Estate shopping centre shortly before 4am on Tuesday when the male employee, 29, asked a man in his 20s to wear a surgical mask.

In a now-viral video, the man can be seen running behind the counter and punching the employee during the dispute. The footage shows the employee falling to the floor as the man continues to attack and kick him.

The assailant then fled with his girlfriend in a delivery van driven by another man before police arrived.

On Tuesday night, police arrested a 27-year-old man in Tuen Mun they said was the driver of the vehicle. He was being held for questioning and had not been charged.

Lam Tsz-ho, head of corporate communications and public affairs at bus giant KMB, meanwhile, told a Wednesday morning radio programme that passengers had been mostly cooperative under the new ordinance as he had not received any complaints about violations.

He said KMB had provided bus drivers with internal guidelines on handling passengers who refused to wear a mask, including giving them the right to ask anyone not wearing a mask to leave the bus and to prohibit those without masks from boarding.

International students allowed to say in US during Covid-19

“If a passenger [without a mask] refuses to leave … and if the situation is serious and the bus driver is unable to handle the case himself, the driver may then seek help from our inspectors to settle the incident. And if that still doesn’t work, we might eventually need to call the police,” he said.

Lam added that the bus company last week began stocking masks at its major interchange stations and customer service centres for sale to passengers “at a reasonable price”.

Speaking on the same radio show, Hung Wing-tat, chairman of the Hong Kong Taxi Council, urged taxi drivers to clearly inform customers about the new law, suggesting they place a notice in a prominent position inside the passenger compartment to avoid disputes.

“Business had been down recently, and taxi drivers don’t want to get into quarrels with passengers,” he said, adding that if taxi passengers were in need of a mask, drivers should also carry extra masks to provide them if necessary.