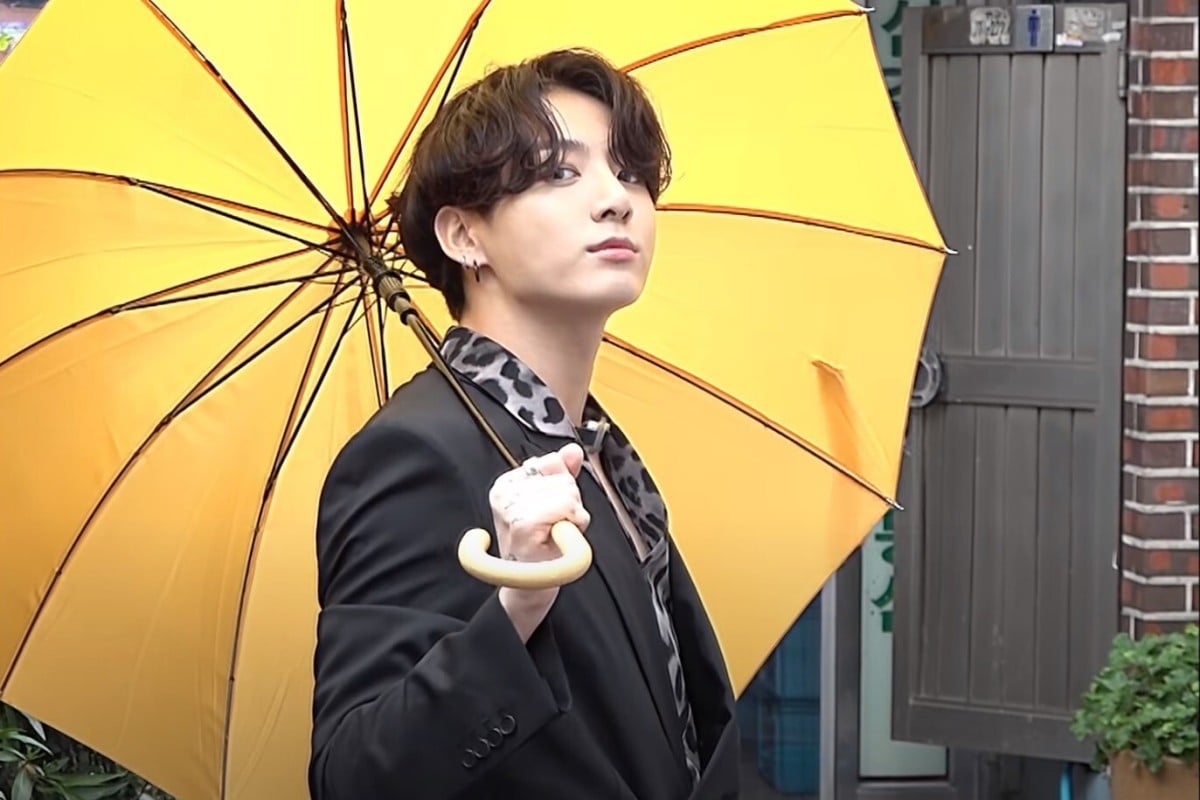 Jungkook is seen posing in a promo video with an umbrella that has upset some mainland netizens. Photo: via YouTube

Many Hong Kong netizens suspect that BTS is referencing the Hong Kong yellow camp in its latest visuals of a rap competition, ignoring previous boycott calls by Chinese internet users.

A thread on popular local forum LIHKG headlined “Are they being too obviously ‘yellow’?” sparked heated discussions online. “This is not a coincidence anymore when there are too many [signs],” said one user.

So, what are the signs everyone is looking at? Last Friday, Big Hit Entertainment released a promotional video for its Hit It 8 Hip Hop competition with the theme “ready for the spotlight”. In the video, a blue sea of animated, masked musicians are dancing to the music, and one in the spotlight wears a yellow coat.

The competition promo that has people talking. Photo: via YouTubeThis visual reminds Hongkongers of the yellow and blue camps during the pro-democracy protests last year. The blue camp supported the establishment, while the yellow camp supported those who wanted full democracy for the city.

Last week, the boy band released another piece of seemingly political material. The promotional video and photos for the 2021 “Season’s Greetings”, their annual release of fan goods, sees a group of black-clad men spinning yellow umbrellas to cover the screen, just as protesters used them to shield their identities during the protests. Then, BTS’ Jungkook shows his face, poses with a yellow umbrella, and smiles.

One netizen remarked: “The anti-extradition law movement really made me rethink Koreans.”

BTS fans suspected something was up when the band dropped some merch last month which included a water bottle stamped with the words “be WATER with BTS”. “Be water” are famous words uttered by Hong Kong’s famous kung fu star, Bruce Lee, who used them to describe a fluid and flexible tactic in the face of attack.

The slogan was enthusiastically adopted by demonstrators, who used the tactic to play cat-and-mouse games with the police.

“I only know it as the tactic used by Hong Kong protesters. Are you supporting the ‘yellow riot’ in Hong Kong? Hong Kong has always been part of China, BTS please explain to me.”

The group was already in trouble with mainland netizens who criticised their acceptance speech at the Van Fleet Award in South Korea Oct 7 for not acknowledging China when talking about the Korean War of the 1950s.

In June, BTS donated $1 million US dollars in support of the Black Lives Matter movement, where their fans, dubbed as ARMY, also caught up with their idols to donate $1 million within 25 hours with the hashtag #MatchAMillion.