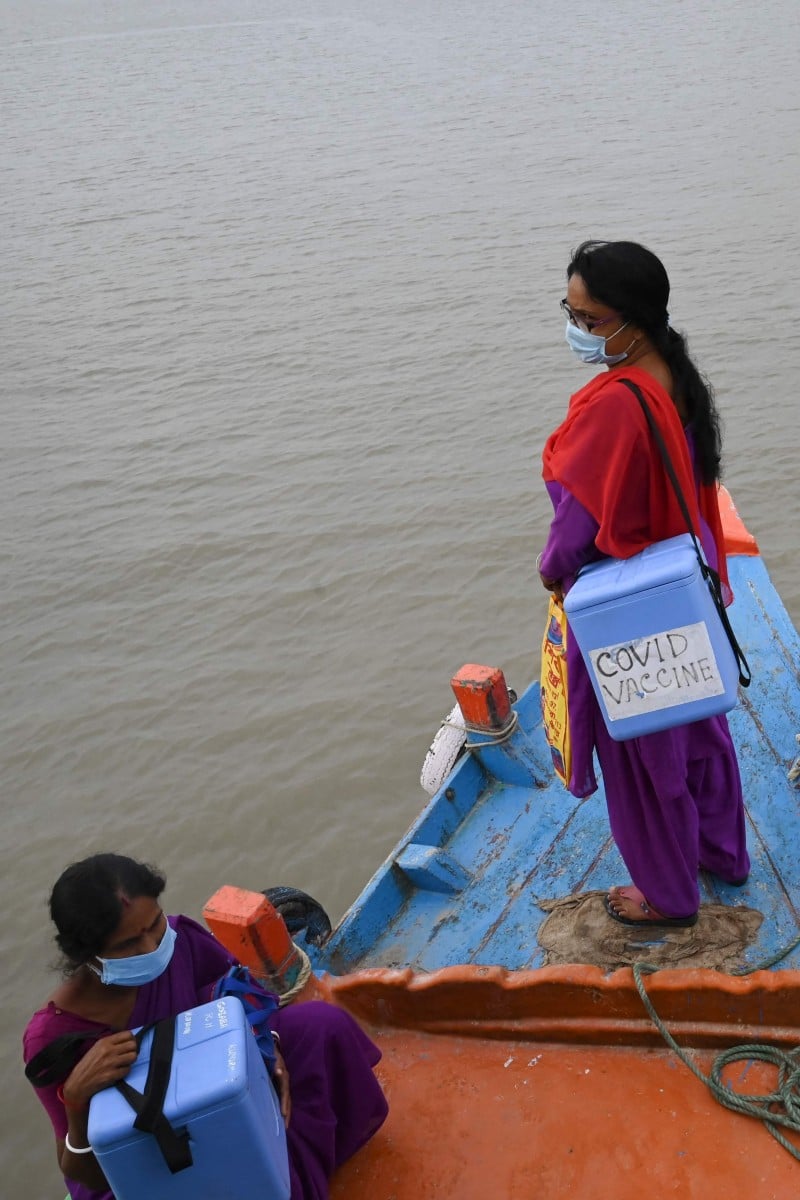 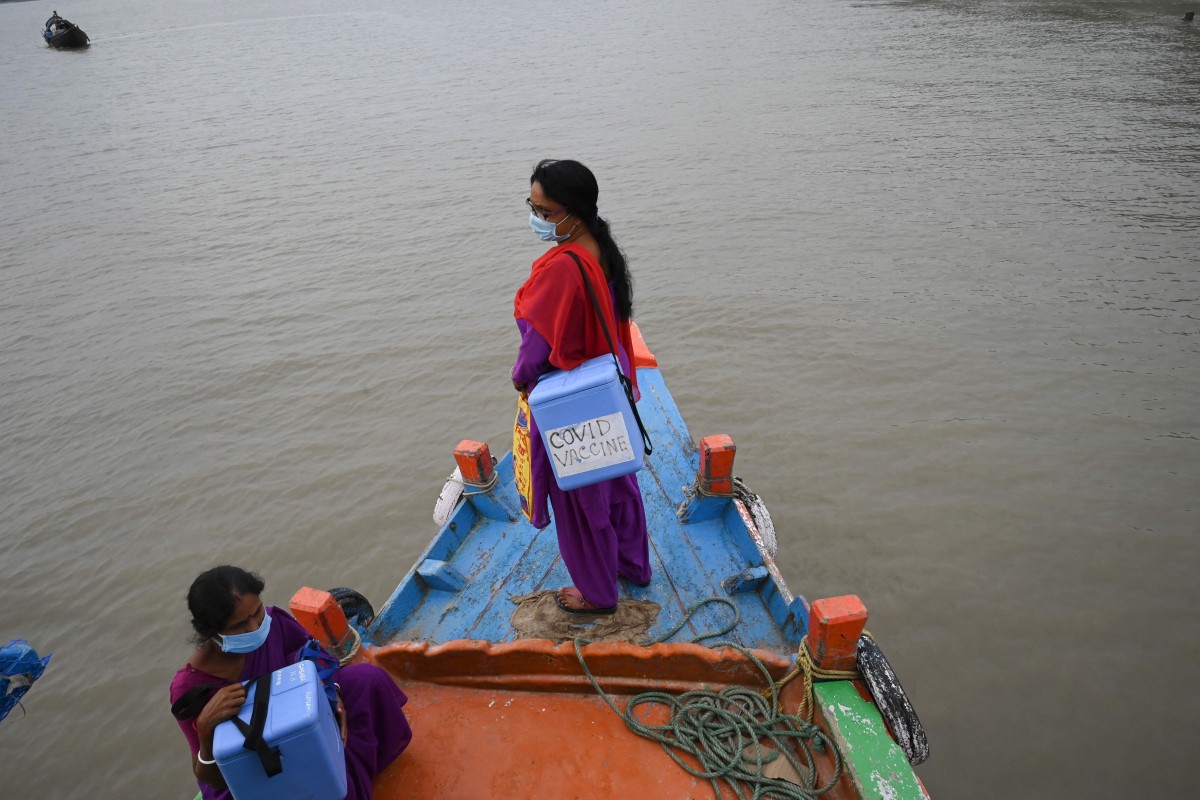 Health workers carrying boxes containing Covid-19 vaccines travel aboard a ferry after a vaccination drive at an island 100km south of Kolkata in India. Photo: AFP

More than three billion Covid-19 vaccines have been administered around the world, an AFP tally found Tuesday, as countries race to contain the Delta variant that is fuelling outbreaks all over the globe.

The highly infectious strain of coronavirus has caught many nations off guard, with Russia reporting its highest daily death toll yet, Australia shutting down city after city and fears growing over major sporting events like Euro 2020 and the Olympic Games in Tokyo.

What you should know about the Delta variant

At least 3.9 million people have died from Covid-19, and while some wealthy countries are succeeding in bringing infections down thanks to strong vaccination drives, others where shots are not as readily available are struggling.

According to the tally, high-income countries (as defined by the World Bank) have administered an average of 79 doses per 100 inhabitants, with the United Arab Emirates, Bahrein and Israel taking the lead.

In low-income nations, the figure is just one shot per 100 people.

Honduran Health Secretary workers unload 1.5 million doses of the Moderna vaccine, donated by the US through the Covax scheme at the Armando Escalon aerial base, in San Pedro Sula, Honduras. Photo by Handout / Honduran Presidency / AFP

On Tuesday, foreign ministers from the Group of 20 major economies stressed the need for greater global cooperation in the face of the pandemic.

“Multilateral cooperation will be key to our collective ability to stop this global health crisis,” US Secretary of State Antony Blinken told the ministers in the ancient Italian city of Matera.

Western leaders have pledged to donate one billion doses to poorer countries, but have been widely criticised for being too slow to help.

Vaccine hesitancy has also played a part in slow uptake.

In Russia, which recorded its highest daily death toll on Tuesday since the outbreak of the pandemic, officials have introduced mandatory shots for some groups of citizens to counter scepticism.

The country reported 652 coronavirus fatalities over the past 24 hours, with a record-high number of daily deaths - 119 - in Saint Petersburg, which is due to host a Euro 2020 quarter final on Friday.

Should vaccines be mandatory for returning to school full-time?

Meanwhile Australian public anger is growing at the slow pace of vaccinations in a country that had been broadly successful in eliminating local transmission and leading an almost-normal life.

The Delta variant has pushed Sydney, Perth, Darwin and Brisbane into lockdown, meaning a total of more than 10 million Australians are having to stay home.

How students are coping with Covid, one year on

But so far, less than five per cent of adults are believed to have received both vaccine doses.

Brisbane resident Nicola Hungerford, 57, said she expected lockdowns to keep happening “until the government gets their bloody act together” on the vaccine rollout.

“It’s gobsmacking and they’re just irresponsible. It shows how little respect they have for people,” she told AFP.

Anti-vaccine rallies are not uncommon in the US. Here, an anti-vaccine protester dressed up as Joe Biden holds a sign outside Houston Methodist Hospital in Houston, Texas, after 153 employees either resigned or were fired for refusing to be vaccinated. Photo: AFP

The speed of transmission of the Delta variant has fuelled concerns over ongoing or upcoming sporting events.

On Tuesday, Germany urged the British government to reduce the number of fans allowed into Wembley stadium for the final Euro 2020 matches.

“I think it’s irresponsible for tens of thousands to gather in close proximity” in countries where the Delta variant is spreading, Interior Minister Horst Seehofer told Germany’s Augsburger Allgemeine newspaper.

UEFA and the British authorities have said some 45,000 supporters will be allowed to attend a game between England and Germany on Tuesday afternoon, equivalent to 50 per cent of capacity.

Attendance will be increased to 75 per cent, or more than 60,000 fans, for the semi-finals and final at Wembley, in what will be the largest crowds at a sports event in Britain since the start of the pandemic.

The Delta variant was first identified in India, which suffered a vicious wave of coronavirus that overwhelmed hospitals and crematoriums at its height in April and May.

A health worker inoculates a woman against the coronavirus inside a mobile vaccination van in New Delhi, India. Photo: AFP

Now, bodies buried hastily along the banks of the Ganges river by families who could not afford funeral pyres have started to re-emerge as flooding dislodges them, a reminder of unspeakable human tragedies brought on by the virus.

“It was really sad to see poor people burying their loved ones in an undignified manner, but the rising water level has made it worse,” Sonu Chandel, a boatman, told AFP.

“There is always the fear of (a body) hitting the oar or (my boat) running over a dead body as the water level goes up.”