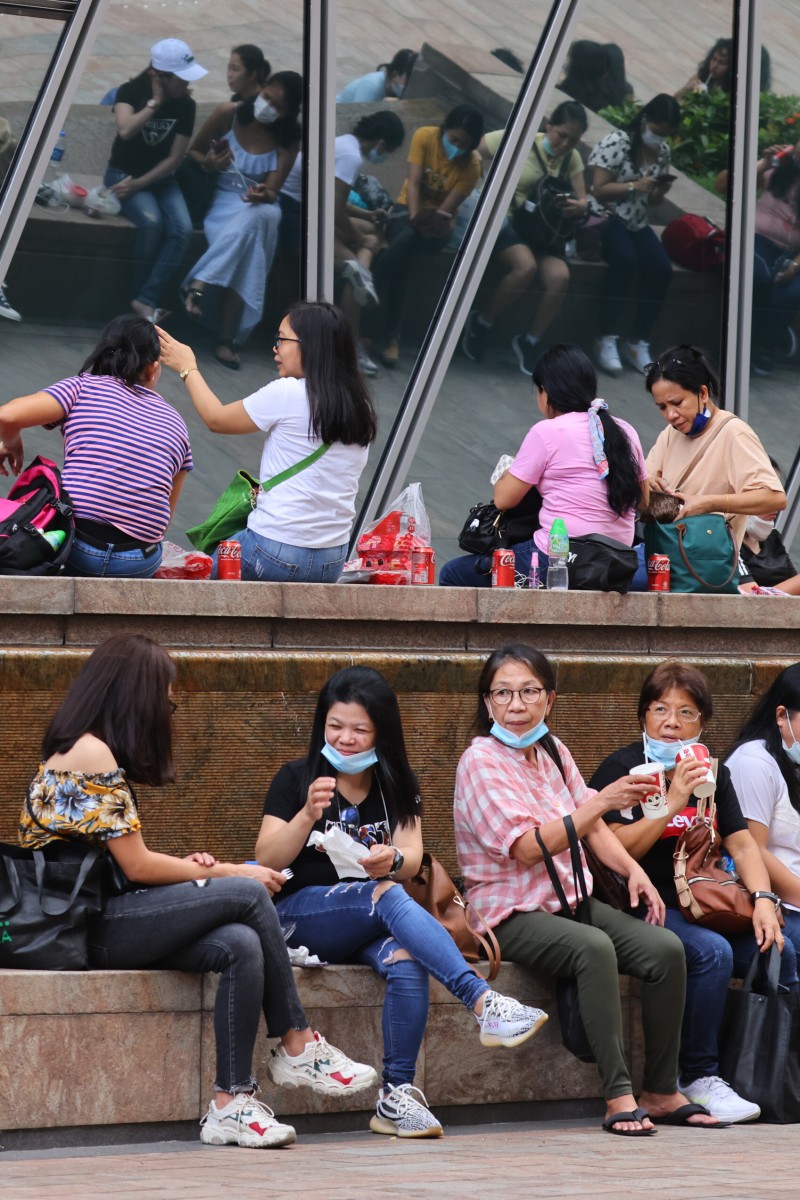 Wages for domestic helpers have been frozen for the second year in a row. Photo: SCMP/ Dickson Lee

The minimum pay for Hong Kong’s 370,000 domestic workers will remain unchanged for a second straight year. The government decision is partly blamed on the economic slump caused by the Covid-19 pandemic.

Late last month, the government announced that the monthly rate would stay at HK$4,630. But an allowance for workers who do not receive food from employers would rise by HK$52 to HK$1,173. The higher allowance applies to contracts signed from October 1.

Hong Kong needs to do more to protect domestic helpers

In 1973, the government started the minimum wage scheme for foreign domestic workers and set the amount to HK$450 per month. It reviews the pay of helpers every year. Domestic helpers received a 2.4 per cent pay rise in 2019 and a 2.5 per cent increase the year before.

The last time authorities froze domestic worker salaries for two consecutive years was in 2009 and 2010 – this was during the aftermath of the global financial crisis in 2008. The biggest cut happened in 2003, during the severe acute respiratory syndrome (Sars) outbreak. At that time, officials lowered the minimum monthly wage by HK$400 to HK$3,270.

Now, the city is experiencing a shortage of domestic helpers. Authorities suspended flights coming to Hong Kong from the Philippines in April and Indonesia in June because Covid-19 infections were surging in the two countries. The bans have been lifted, but a number of entry restrictions remain.

The city’s pool of domestic workers fell from 400,000 in 2019 to 370,000 last year. The shortage has led to a bidding war among employers. Many households have struggled to find workers even after offering higher wages. HelperChoice is an online platform that connects helpers to employers. It found in a recent survey that the average salary of domestic workers had reached HK$5,144 per month, mainly because of the labour shortage. Yanni Chow and staff writer

Domestic workers in Wan Chai have an average salary of HK$5,533 per month. Photo: HelperChoice / SCMP

Hot topics: China cracks down on the entertainment industry

Domestic workers have expressed disappointment that their minimum wage has not risen, while employers say the government should have cut salaries instead.

Eman Villanueva, a spokesman for the Asian Migrants’ Coordinating Body, said the pay freeze was “unfair” and “insulting”, and argued that helpers’ workloads had increased during the coronavirus pandemic.

“During the epidemic, children stay more at home; parents also work from home – that means more work for their helpers ... They also have to go to the market to buy food more, and do more cleaning.”

Meanwhile, Betty Yung Ma Shan-yee, chairwoman of the Hong Kong Employers of Domestic Helpers Association, said some employers were expecting a minimum wage reduction for domestic helpers, as many households faced financial hardships amid the pandemic.

“Families with slightly lower incomes, or who rely on a single income source, are feeling the pinch and won’t be able to afford hiring a helper to take care of their elderly family members or children,” Yung added.

A government spokesman said the financial ability of households to afford a helper was the main reason for not changing the minimum salary.

“We have carefully considered Hong Kong’s general economic and labour market conditions over the past year, as well as Hong Kong’s near-term economic outlook, including the impact of the Covid-19 pandemic in this year’s review,” the spokesman said.

Mahee Leclerc, general manager of HelperChoice – an online platform which connects domestic workers to employers – said helpers faced their own increased financial pressure because of the pandemic.

“They face greater expenses and pressure to send more remittances back to their families because the economic situation is far worse back home,” Leclerc said.

“We are not asking for special treatment ... just a living wage,” he said. “It is the government’s fault that we are one of the lowest paid [workers] in Hong Kong.” Yanni Chow and staff writer

The severe shortage of foreign domestic workers in Hong Kong has sparked a bidding war, with desperate employers offering to pay well above the minimum wage to secure a helper, recruitment agents have said.

There are six potential employers for every domestic worker in Hong Kong, and some are offering as much as HK$5,500 to HK$6,500 a month without success, according to Anliza Hung, an agent at Well Harmony Employment Services.

“They’re almost all employed already, leaving those households who want to hire a helper with no options but to offer higher wages or go through the complicated process of hiring from the Philippines and Indonesia.”

She said about 30 to 40 employers came to her company each month hoping to find helpers ready to start work, but there were very few or none available now.

Only about a dozen employers each month are willing to have the agency recruit from the Philippines or Indonesia because that would mean paying more for flights and quarantine.

When hiring domestic workers from the Philippines or Indonesia, employers need to pay at least HK$2,000 in airline tickets plus HK$10,080 for a 21-day compulsory quarantine at the government-run facility.

According to Hung, an elderly couple in urgent need of a helper has been unable to hire one for months. The agency placed them on its priority list because the man, in his 90s, has dementia and his wife, 87, has lower back pain. Both have chronic illnesses.

Recruitment agents said even when their clients were willing to pay more to bring in helpers, the process was stalled by a severe shortage of accommodation at the two designated quarantine facilities – Penny’s Bay quarantine facility and Silka Tsuen Wan hotel.

At Silka Tsuen Wan hotel, a room costs HK$800 per night, and all 409 rooms that opened for booking on August 28 were gone by the end of the day.