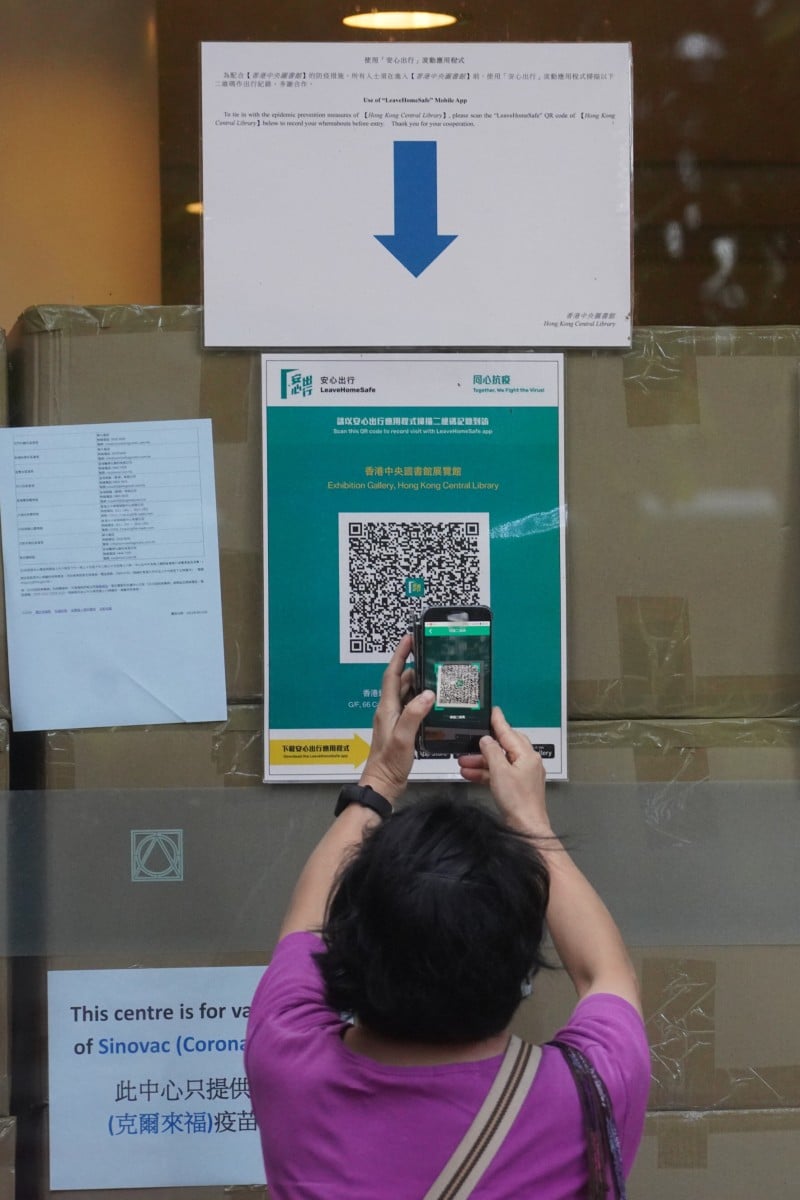 Visitors must scan QR codes specific to government premises before they can enter. Photo: Winson Wong

Anyone entering government premises in Hong Kong will have to use the city’s Covid-19 contact-tracing app from today. Exceptions are only applicable to children, the elderly and disabled people, as authorities toughen their stance against the risk of coronavirus variants.

Under the new procedure, all staff and members of the public must use the “Leave Home Safe” mobile app to scan a QR code before entering government buildings and facilities. These include public hospitals, government offices, museums, libraries and sports stadiums. Manual registration will no longer be available at such venues.

Those who are exempted comprise individuals aged under 12, and 65 or above, as well as disabled people who cannot use the app. But they will have to leave their names, contact numbers, the first four digits or letters on their identity documents, and the date and time of the visit.

Face Off: Is the ‘Leave Home Safe’ app a good idea to combat the pandemic?

They must present the relevant documents to show that the information they provide is correct. Staff in charge at the entrance will also perform test calls to verify the contact numbers. Government bureaus or departments may grant exemptions to other individuals, depending on circumstances. Dr Larry Lee Lap-yip, a chief manager with the Hospital Authority, said last week that the authority would “allow some flexibility” for people who required medical care but did not have the app.

With the global spread of Covid-19 and the high transmissibility of mutant strains, authorities must adopt more stringent measures, said a government spokesman. Authorities had noticed incomplete or false information entered using the manual registration method.

The “Leave Home Safe” app was launched last November to help health authorities trace close contacts of Covid-19 patients. Its use is voluntary, with visitors scanning QR codes specific to places they visit to record information in the software. When someone tests positive, other users who had been at the same places will be notified by the app. As of last week, the app had already been downloaded 6 million times, according to Secretary for Innovation and Technology Alfred Sit Wing-hang.

The app has concerned residents, who fear the government could use it to track their whereabouts. Staff writers and Yanni Chow

Hong Kong’s move to require the use of its Covid-19 contact-tracing app at government buildings will harm homeless residents and other vulnerable groups in need of services, as many of them lack smartphones, an NGO has warned.

Anne Sit Kim-ping, of the Society for Community Organisation, said she feared the homeless, who relied on freely available public facilities such as libraries and sports centres, would now be unable to enter, given that many did not own a smartphone.

“We are concerned that homeless people will find it very difficult to look for help when this new requirement sets in,” she said. “During the summer months, public libraries are one of the few places where homeless people stay indoors during the day. Street sleepers also use free public access to sports centres to refill water bottles or take a simple shower.”

The number of registered homeless people in Hong Kong increased from 787 in 2014 to a record 1,562 at the end of this June, official figures showed.

Sit estimated that just 10 to 20 per cent of homeless people that the NGO worked with owned a working smartphone, adding that charities typically only lent basic phones which could not support mobile apps.

A street sleeper in her 60s at Wong Nai Chung tunnel said she would be affected by the new rule.

Juddy, who came from Britain 15 years ago, said she had no job and had to take care of her partner, who uses a wheelchair.

She boils tap water from public toilets to drink, visits public libraries every week, and seeks help to process documents from government offices. Having had two previous phones stolen, she has not had one for about four months, which would bar her from public facilities under the new rule.

Not all people in Hong Kong can afford a smartphone that can download the “Leave Home Safe” app. Photo: Dickson Lee

Issue: How Hong Kong’s health code system differs from that of the mainland and Macau

One key stumbling block to opening Hong Kong’s border with mainland China has been the issue of adopting health codes that could aid detection and prevention of the spread of the coronavirus.

Innovation and technology secretary Alfred Sit Wing-hang said last month that the government had submitted many proposals on how a Hong Kong health code would work for quarantine-free travel across the border. But how is Hong Kong’s “Leave Home Safe” app different from the health codes in the mainland and Macau?

Last November, Hong Kong launched “Leave Home Safe”. To calm a sceptical public, the government stressed it was a voluntary scheme, and officials would not use positioning services or other mobile phone data, while venue check-in data would be encrypted and saved on personal devices for 31 days, without being uploaded to the government system or other platforms.

On the mainland, the health code system has two parts. One is the health code, which indicates Covid-19 risk status. Another part is the “itinerary code”, which tracks a user’s whereabouts with mobile phone data. The code stores information about user movement for authorities to use. Both are required to enter large public venues.

Macau, which has reopened borders with Guangdong, has its own health code system. Its version does not have a tracking function, but generates coloured QR codes which indicate a person’s level of risk based on health status, travel history, and possible contact with Covid-19 patients. The QR code, updated daily, is required when people enter large public venues.

Users with negative test results can switch to Guangdong’s health code system when they cross the border, but the two apps are not directly linked.

Francis Fong Po-kiu, honorary president of the Hong Kong Information Technology Federation, said, “We let apps such as Google [Maps] track our whereabouts every day. But whether people are willing to allow the Hong Kong government – let alone mainland authorities – to do that is a very different question.”

While privacy issues need to be ironed out, analysts said the city would ultimately have to follow the mainland’s expectations. It would be up to them to decide which health code to use and when the border can reopen. Staff writers